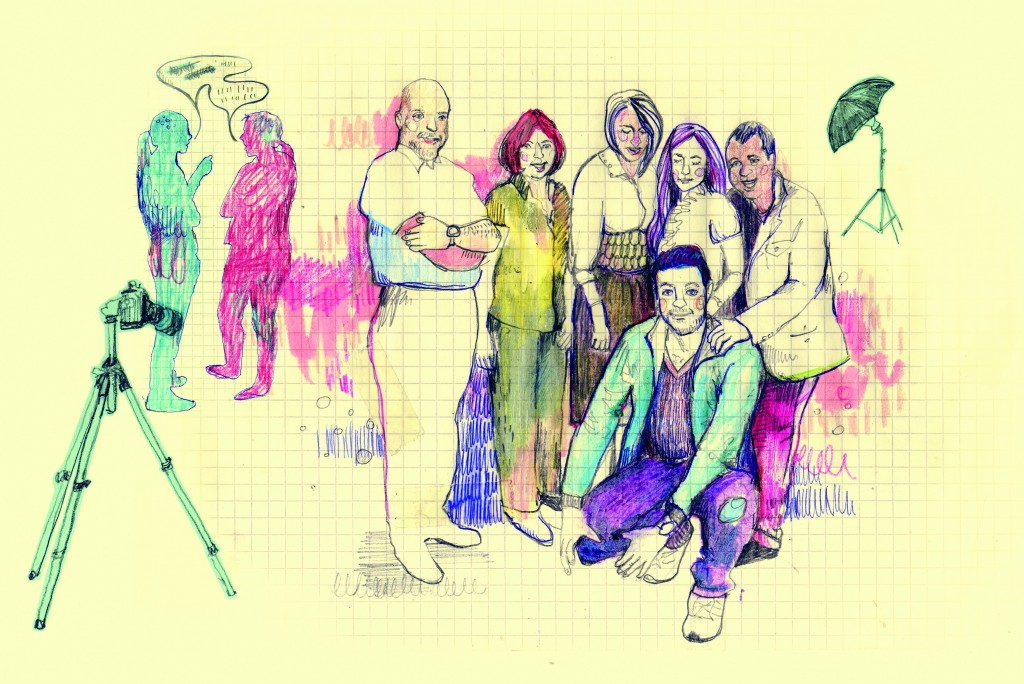 By Audrey Kobayashi I Illustration by  Arlette Espaillat

“I’ve never saved anyone’s life through photography,” the sports photographer says. “I would love to tell you that I have, but I haven’t. No one has ever lived or died based on my pictures. It doesn’t work that way.”

He smiles when he says this, with his hands palm up, outspread. His live-in studio is indeterminately modern and comfortable. There are desks covered with scanners, Macs, magazines, wires; small bookcases and shelves laden with photo books. Music drifts in from the other room.

“This is my business card,” he points to a 3 inch plastic tube with red polyurethane end caps. In it is a 4 gigabyte flash drive, also red, with his name and details engraved on the plastic casing. If you were to plug it into your laptop it would display links directing you to his website, his email address, a slideshow of his work, and several behind-the-scenes videos of him working in exotic locales with athletes both hardened and lithe, laughing as the camera lights flash. All of this set to youthful tracks of bands like Peter, Bjorn and John.

The flash drive looks safe and pristine in its waterproof packaging, as if you could walk to Far Rockaway, toss it out into the waves, and three months later it would wash up on a South African beach where anyone passing could pick it up, plug in their computer and watch exactly what you’re watching right now. Maybe this has already happened.

You look up. He’s smiling at you again. You find yourself smiling back.

“I had to think about your question,” he says. “About what was my worst shoot ever? You know, I had one in 2004 that really stunk. I just couldn’t get the subject to do what I needed. The pictures ran in the magazine, but they weren’t terribly interesting. However when I really think about it that wasn’t anywhere near as bad as the Facebook debacle.”

“This is in March of 2009. A year ago,” he says. “We’re in a studio on the West Coast. Inside. Big name athlete. Not public in any way. It’s an advertising shoot for a major brand here in the US.”

“When you photograph professional athletes there’s always a certain sensitivity involved as they are celebrities in their own right. You get a whole lot of people around them who are ‘yes men,’ coddling them. You don’t want to rock the boat with the talent in any way whatsoever. Then there’s the agency. With athletes or celebrities endorsing a product the agency never wants to reveal whom it is until they spring the ads. It can be very hush-hush.”

“Everything goes smoothly. We wrap the shoot and gather ‘round for a group photo. There are the digital tech, two assistants, the studio manager, hair and makeup, the stylist, the client, the account director and creative director, the talent, and of course me. It’s all high-fives, hugs and kisses. Client’s happy. Talent’s happy. Everyone’s happy. We see them off to the airport and it’s back to work.”

“I stay on an extra day to meet with another agency and pitch some ideas to them. It’s 10:30am and I’m showing my slideshows and videos to a room full of advertising types. Then my phone rings,”

He makes a sour face.

“Normally I wouldn’t take a call during an agency meeting. It’s unprofessional to excuse yourself in the middle of a conversation. But this was a call from the creative director of the previous day’s shoot so I apologize, step into the hallway and close the door behind me.”

“Without any foreplay he launches into me. He tells me that the makeup artist posted images on Facebook that have the shoot’s concept visible in the background. It’s a picture of her and the stylist and there, behind them, is exactly what we were shooting. Clear as day. We both know how bad this is. We don’t have to discuss it.”

“So I call the hair and makeup girl and ask her to pull down any images that she has posted on Facebook. I call the creative director back and let him know that the photos will be down in a few minutes. He seems satisfied and we get off the phone. I go back to the meeting and apologize for the interruption. No one seems too put out.”

“Not four minutes later my phone rings again. This time it’s not just the creative director, but the managing director as well. I step out into the hallway again. There are some angry faces behind me in that room, and some angry voices on the line with me as well.”

“They tell me that my digital tech just posted the shoot’s group photo on Facebook. Now this wouldn’t normally be an issue, but because the concept has just been put out into a public forum all it takes is a little detective work to put two and two together and reveal the whole campaign—the talent, the product, the endorsement and the concept. All from these two seemingly harmless low-res photos. The conversation goes south sickeningly fast.”

“The managing director’s voice is dead serious. She says, verbatim, ‘We fear the concept that we have sold to our client is now in jeopardy and potentially devalued. We feel that you are in breach of contract.’ Breach is an ugly word. When it’s uttered it’s like a needle scratching a record.”

“I tell her to slow down a little bit and let’s talk this out before we start throwing legal terms around. Let’s talk about what can be fixed and what can be controlled now. I’ll accept the blame because I hired these people.”

“She’s outraged. She says, ‘I’ve never had this happen before.’ I tell her that I haven’t either. This is all new territory, but something we’re all starting to deal with—how rapidly information gets out there into the world now with Twitter and Facebook. So how can we handle this?”

The sports photographer’s face is still open and expressive, but his eyes have stopped moving. He places the blade of his right hand on the coffee table in front of you two, three times, marking out a timeline: once for each sentence.

“What I need to do to make the agency comfortable is this. I need to draw up a notarized letter stating that I accept any blame. If there is any backlash from the client then I will eat the expenses. That’s how rapidly you can lose $20,000, not to speak of the fee or anything else.”

“The agency also wants all of the behind-the-scenes photos handed over to them so that they can monitor the Internet for them popping up anywhere else. The truth is they’re not being unreasonable. They’re just covering their collective ass.”

“In the end the client never got wind of the fact that anything happened,” he continues. “They never withheld payment. But I can tell you that I haven’t worked for that agency again. Before that I was doing about four jobs a year with them.”

“My relationship with the digital tech is still good. Posting the group photo was harmless, really. I haven’t worked with the hair and makeup girl since then, but then again, I haven’t shot in that particular location since. She wasn’t being malicious. But the truth is, I’d probably hire someone else next time.”

“The fallout of that experience is this: now all my call sheets state that any photos taken on set cannot be posted on Facebook, Twitter or any social networking site. Any status updates cannot include the name of the client or the talent we’re shooting. You can talk about the fact that we’re doing a job in Shanghai or wherever, but names and details should not be revealed until after the ad has run.”

“This is a new world. This is a new era. Hey, I use Facebook. Part of how I market my work is letting people know what I do. I show a lot of behind-the-scenes videos of my productions. I just shot the US snowboard team and decided to go out there and do it solo, old school. Twenty-seven snowboarders in three cities. I took cameras with me and mounted them around the room. I gave them to the other snowboarders, to their moms, and let them shoot what they wanted. Best cinematographers ever. I have a video editor who works for me part time and she puts them all together for me.”

He holds up the flash drive again.

“I will continue to distribute my business card this way. It’s truly viral. People carry them around in their pockets. They pull them out on other photographer’s sets and conversations get started. Your name comes up. Suddenly you’ve infiltrated someone else’s shoot.”

“I use the same techniques that my clients use to promote my product, my photography. And I can say it’s working pretty well, so long as I keep all the corollaries under wraps.”

“Our industry is about change. It’s about the new. You have to adapt or die. Or find another job.”

The photographer puts the flash drive back in its plastic tube and closes the red end cap. He places it in your hand.