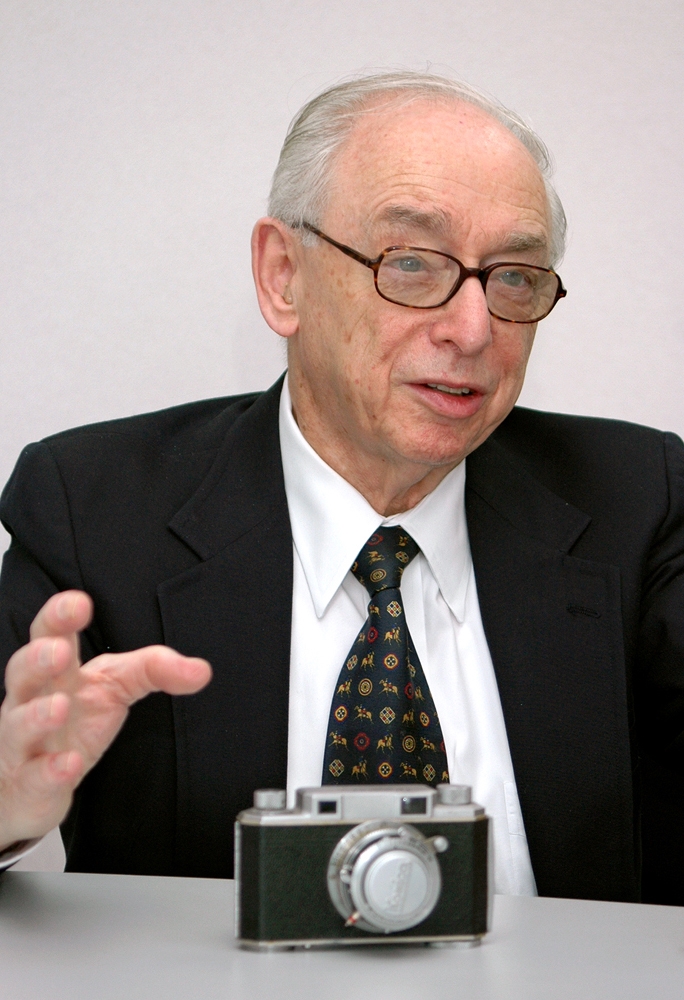 Henry Froehlich and the Konica Story

A brief biography by Marian Froehlich

In 1950, when Henry and I were newlyweds, we became business partners as well. It was a time when 35mm film ruled the growing amateur camera market.

A gift of a Kodak Brownie camera when Henry was a child in Germany generated his interest in photography. Later, he took lovely portraits of his family before both his father and older brother died in a concentration camp in 1938. In 1940, Henry, his mother and younger brother, Max, landed in the USA and reunited in Philadelphia, PA. At seventeen, Henry had few possessions and no money or formal education—the Nazis had forced him out of school. After WWII Henry became an entrepreneur, forming an import-export business, Rayelle Foreign Trade Service, exporting American photo goods like Radiant film and movie screens. It was a family business as his brother and mother were part of the company.

Through a contact at the US Department of Commerce, Henry met Henry Corra, who lived in Hong Kong and worked as a photo importer of Bell & Howell and Polaroid in Asia. When he came to the US, Corra brought a bag of Japanese-made cameras and lenses. Germany had then a lock on US imports, covering about ninety-nine percent of the market. Henry saw a chance to compete with the Germans. A meeting was set up in New York for dealers and magazine photo editors, including Look and Life, to see the Japanese products. At that time (before they zoomed with big budgets), early models of Nikon, Canon and others were mere imitations of German designs, but Konica had a unique rangefinder, fine lens and design, which Henry liked. He contacted the Japanese manufacturer in 1950. An immediate rapport between the factory vice-president and his export manager led to a simple two-page agreement. Konica Camera Company was born.

With a reasonable product price (Japanese cheap labor undercut Germans’ high manufacturing cost), a first small order plus a Konica representative arrived to our office. Henry and I filed for trademark protection. Having a commercial art background, I hand lettered the five ink drawings on Bristol board required by the Patent Office while Henry completed the paperwork. We didn’t consider a lawyer, which we could ill afford then, yet our registration was accepted and we were protected from the gray market for thirty years.

How did Henry, only twenty-seven years old and under-capitalized, get the Konica USA franchise? At that time, established distributors laughed at the notion of “quality” Japanese products—then called “Jap Crap” based on a pre-WWII image. To overcome prejudice, an advertising agency suggested a slogan: “KONICA from NEW Japan.” Another slogan, “Fine Performance,” ran with a photo of Tocanini conducting the Philadelphia Orchestra. It brought an angry phone call from the photographer, Adrian Siegel. He said we needed his permission to use his image, which the orchestra management had supplied. Not only did Henry smooth everything out, he also managed to convert Adrian to Konica!

Our most famous advertising slogan, “The lens alone is worth the price,” resulted from an outside lab using rigid lens testing to prove superb performance. Slowly, dealers were moving Konicas off the shelves. The Korean War brought photojournalists to the Far East. They praised the Japanese photo equipment. Sales picked up. We hired a national sales force and were able to afford a house. Then we suffered a big setback as workers in the newly democratic Japan went on strike. No shipments were made for what seemed a very long time. Office help went on part time. The salesmen couldn’t get commissions. By then we had two children. We dug into savings. Henry said if we got through it, and if anyone ever offered to buy us out, I should remind him of this anxious time.

The strike ended. We were solvent again. Around 1960, at the International Photo Exposition (Photokina) in Cologne, Germany, Henry networked with a fellow refugee, Paul Klingenstein, who imported prestigious German photo products in a division of Berkey Photo Co. He introduced Henry to Ben Berkey who was looking to add a Japanese line. Thus, I reminded Henry of his desire for security.

Joining Berkey (a large New York Stock Exchange firm) meant that I no longer would be part of the business. We moved to New York. With Henry still running Konica, engineers made more sophisticated models including high-resolution interchangeable lenses. It was a great time for the photo industry. Japanese products had overtaken ninety per cent of the US import market; Japanese cameras also saturated Europe, and even Germany. But soon point and shoot cameras offered lighter, pocket-size designs, and Henry studied the new trends. He said film was on the way out. Manufacturers like Sony and Fuji hinted replacing film with chip technology. No film—unthinkable! It was time to move on.

When Japanese photo manufacturers set up their own US locations, we returned the Konica trademark. And in 1980, Henry left Berkey to become an entrepreneur again. With the children now grown, Henry and I founded Froehlich Fotovideo. I designed the logo. We took the equipment that transferred prints, movies and film to videotape for a second opinion to a friendly dealer, Marvin Lederman. Though few people knew what a VCR was then, Marvin thought the idea good enough to suggest that we hire his two sons to develop and sell the systems. Our daughter Carol joined in (a family business again), and soon customers wanted their old photos preserved, transferred and shown on TV. The market got saturated in five years. Jan Lederman became Henry’s protégé.

Attending another Photokina, Henry felt the need to shift to the professional field. He connected with Mamiya, a manufacturer of medium format cameras, then added Toyo large format. To set up a new marketing company, Henry brought Paul Klingenstein out of retirement and included Jan Lederman. The new company, Mamiya America, opened a plant in Elmsford, NY. The company expanded and changed its name to the MAC Group—servicing many amazing photographers, who also became friends. Henry planned to retire and slowly turned over management to Jan. Then, suddenly in January 2008, Henry died of cardiac arrest at age eighty-five—leaving Jan to carry on, and Henry Froehlich to be remembered as a pioneer of the photo industry.