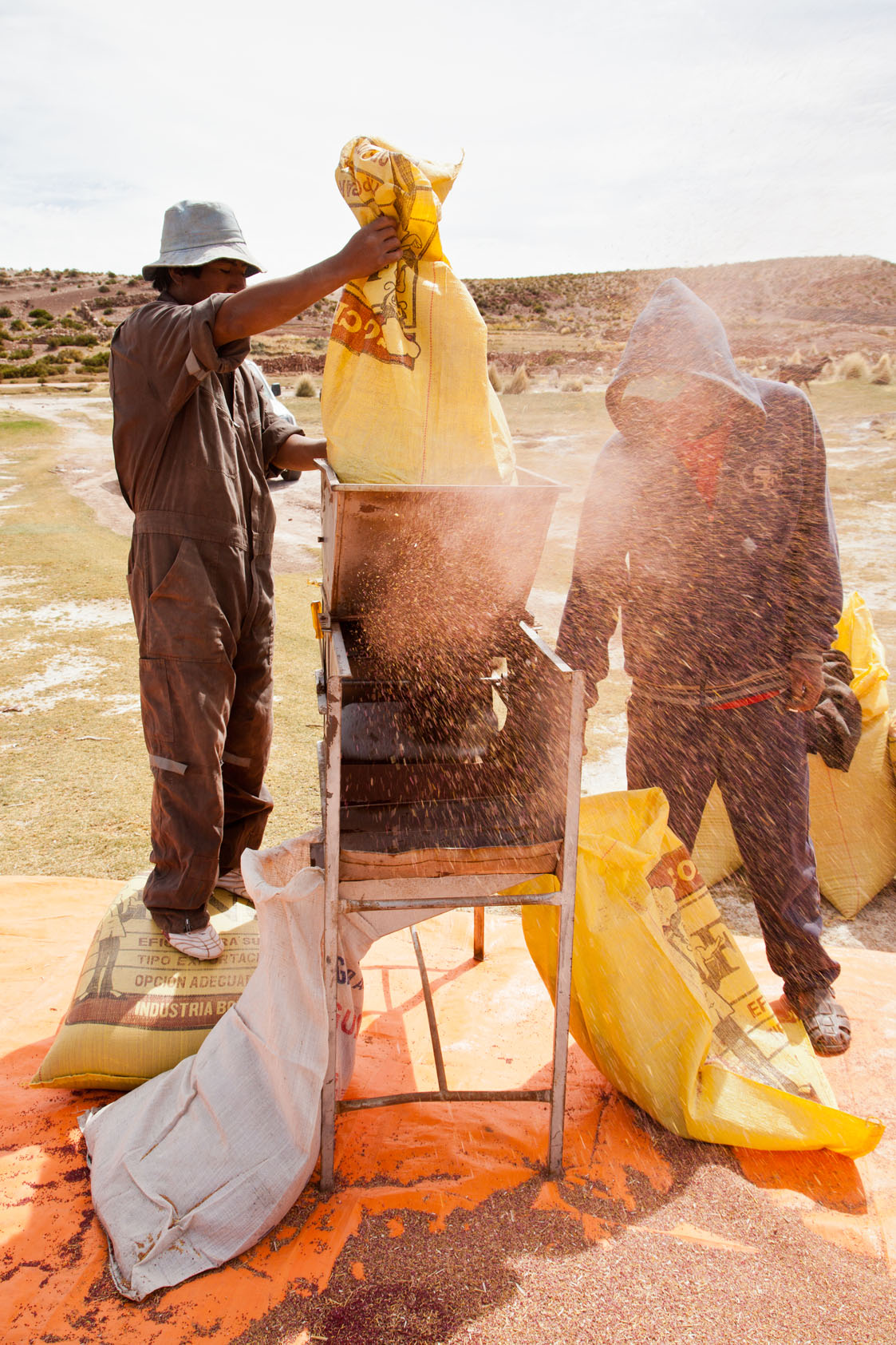 Quinoa is everywhere these days: in salads, alongside steaks, and even discreetly mixed into pancakes. It’s the newly discovered super food that has been around all along, grown and harvested by the Incas centuries ago. Within the past ten years, quinoa has surfaced from culinary obscurity, taking a place in America’s health food lexicon. The Food and Agriculture Organization of the United Nations has dubbed 2013 the “International Year of Quinoa.” Not bad for a little grain. 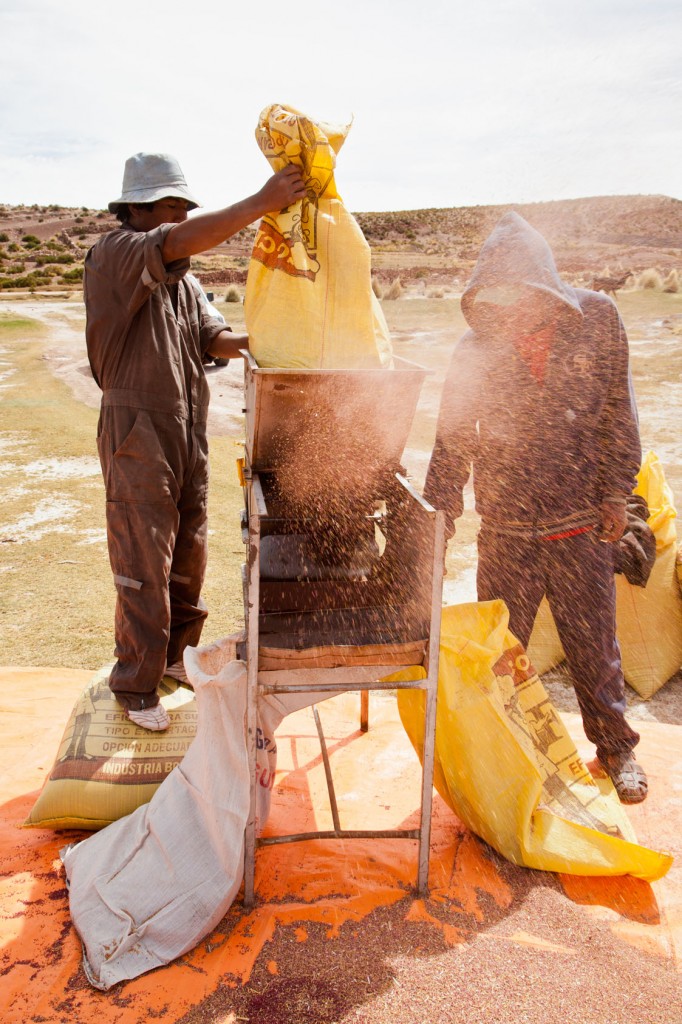 From “The Mother Grain”

Photographers Michael Wilcox and Stefan Jeremiah went to Bolivia to photograph the quinoa harvest for a book project. There they did research, met with farmers, and eventually had interviews with PROINPA, an Andean agricultural development organization. After their time in Bolivia, Wilcox and Jeremiah decided to continue their work on the subject and to branch into film: “It became really clear to us that this project should be a documentary, that the story was just more than a book and a series of exhibitions,” Wilcox says of the project’s beginnings. 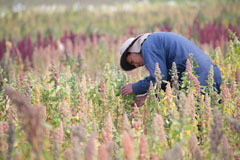 A Proinpa technician inspecting quinoa on April 2, 2012 near Viacha, Bolivia.

Wilcox and Jeremiah first met through their soccer team. “It turned out he was a photographer,” Wilcox says, “while I was still sort of aspiring, so he’s been instrumental in my development of knowledge of photography.” At the time, Wilcox was researching quinoa production in Bolivia. “[Jeremiah] happened to have a similar want to develop a quinoa story… So when I started yammering on about quinoa, he just happened to be on the same page; it sort of took off from there.”

Wilcox’s educational background is in English and Literature, but nevertheless “always had a camera and an interest in production.” Before The Mother Grain, Wilcox took freelance work with magazines and found positions on production sets, while immersing himself in photography and journalistic projects. All of this work would prepare him for The Mother Grain. “All the experience I had in production really helped with a big project like this one,” Wilcox says. “Right out of college I worked for a year in a marketing position, and being able to develop that skill set helped.” After attending art school in London, Jeremiah contributed work to Getty Images, Magnum Photos, and Wireimage, eventually establishing Bear Witness Pictures in 2006. 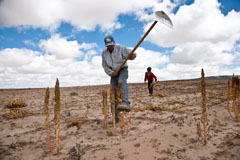 A day labourer chops down quinoa using a hoe on April 5, 2012 near Huancarani, Potosi, Bolivia.

The two have put in more than time into the project. “We’re casting our nets out pretty far because we’ve self-financed until this point,” Wilcox states. Fortunately, PROINPA has stepped in and helped produce the filming of The Mother Grain documentary in Bolivia. As for filming outside of Bolivia, Wilcox and Jeremiah hope their Kickstarter campaign will fund production.

The film will explore the effect of quinoa’s growing popularity, how more importers and exporters are starting to buy it, and how this is benefiting quinoa farmers in Bolivia. “We want to pick [the farmers’] brains and talk to them about quinoa,” Wilcox explains, “and not necessarily just quinoa, but using quinoa as a catalyst to talk about bigger issues like hunger and poverty.” One of the Millennium Development Goals of the United Nations is to halve world poverty and hunger by 2015, a goal hindered by the economic downturn. With The Mother Grain, Wilcox and Jeremiah are looking at how the UN is achieving this goal and how quinoa plays a part in the eradication of world hunger. 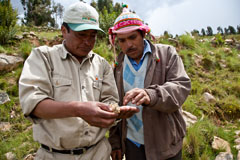 Farmer Jorge Castillon inspects his quinoa for parasites with a Proinpa technician on March 29, 2012 near Tiraque, Bolivia.

It helps that quinoa production is taking root in foreign soil, and notably in the U.S.. “It’s interesting to see these people outside of traditional quinoa cultivation, outside of Bolivia, because they see the benefits of it,” Wilcox explains. Wilcox and Jeremiah recently visited a farmer in upstate New York who has started planting quinoa for the first time.

“When I tell people about this project they assume I’m some incredible quinoa enthusiast… and to some degree I am,” Wilcox states, “but the whole idea behind the project isn’t so much quinoa-centric, it’s also about looking and educating and being more aware of the alternative grains out there and alternative procedures of growing.”

To help Bear Witness Pictures complete their amazing story of the super grain, and watch a preview of the film, visit their Kickstarter page here. The campaign runs until October 5, 2012.
[stumble]