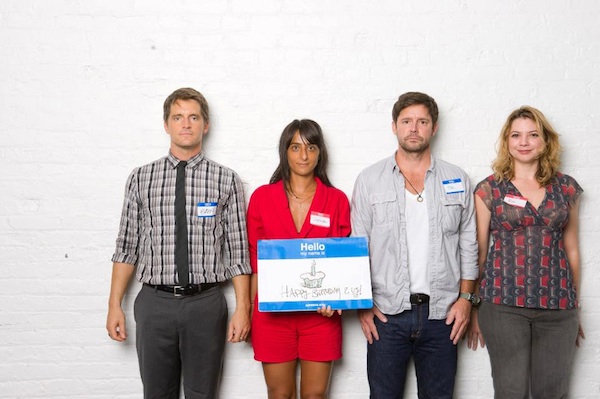 The Big Apple is a hard nut to crack—particularly for those in the creative industry. In a city that’s perpetually in a rush (with ear buds in), it’s incredibly difficult to make connections with anyone, let alone connections that can lead to a job.

Which explains why Adhesive NYC, the quasi-cultish nonprofit that facilitates monthly networking events for creative types, is now entering its fifth year—and is more popular than ever.

The premise of Adhesive is refreshingly simple, and hasn’t changed much in the last five years: according to their website, the point is “to stick like-minded creatives together in a casual environment.” The events, which are free to attend and are held during happy hour at various hip bars and studios around the city, attract creative New Yorkers and out-of-towners of all sorts, from photographers to designers to art buyers to filmmakers. All come hungry to get some much-needed social interaction in an industry where, as co-founder Shabnam Azadeh put it over drinks at Tom and Jerry’s, the NoHo bar that hosted the first Adhesive, “Most of the work you do is done over the phone or email.” Especially in New York, an incredibly dynamic and fast-paced creative environment, two people might work together for years, without ever meeting face to face. Indeed, she says, at most events, “Everyone in the room knows at least one other person—they just don’t know it yet.”

The events are designed to help members build real relationships in a no-pressure setting—with the potential of facilitating professional interactions as a result. Adds co-founder Brian Bergeron: “Sometimes it’s easier to represent yourself in person. Part of what makes a working relationship great is having a certain personal comfort level with the people you’re working with.”

Adhesive began in an organic fashion appropriate to its laid-back philosophy—in fact, it happened by accident. In August of 2007, co-founder Wini Alcorn set up a coworker and a friend on a blind date that quickly turned into a party, when each invited fellow creative types to reduce pressure and jitters.  As it turned out, the night was a resounding success—there was a genuine chorus of “we should do this again sometime.” Thankfully, Bergeron took down contact emails, and followed up the next month with another get-togeher, and then another one after that. Each time, the headcount swelled, until by the fifth meet, the group numbered over 200. These days, though turnout fluctuates depending on venue location and weather conditions, a typical Adhesive continues attract around 150-200 creatives.

As the community has grown and matured, the Adhesive team has made a point to hold on to what made it special from the start. Membership is still free—despite constant encouragement from members to monetize the operation. “We’re in the negative,” laughs Azadeh, who believes an entry fee would filter out a lot of potential members. And there’s no pressure to show up every month. Most important, the casual vibe remains a big selling point—“It’s not hardcore networking,” Brian is careful to point out. While some inevitably show up to the events portfolio in hand, with the sole intention of landing that next gig, most members uphold the original philosophy of the group—as co-founder Shabnam Azadeh puts it, “The aggressive ones get filtered out pretty quickly.”

It’s a philosophy that has been a big hit in the New York creative scene. In five years, membership has swelled to well over 2,000. “We have an amazing following,” says Azadeh. “People have a lot of love for Adhesive. It’s really a great energy.” 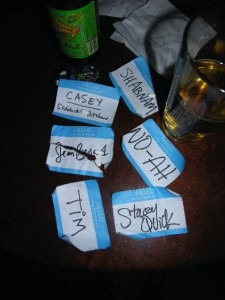 The aftermath of a successful Adhesive

For Adhesive, a demanding operation run as a labor of love—Alcorn, Azadeh, Bergeron and co-founder Tim Willis all have full-time day jobs—success has brought growing pains. Increased turnout has meant that some events have suffered from what Azadeh calls a “fire-hazard feel;” as Bergeron puts it, “We’ve really outgrown our old venues.” The company just launched a new website designed by Lapis Ink Studios, and is active on Facebook and Twitter, but features often requested by members, like a formal job board and a blog, have remained out of reach for the time being.Without a staff or funding, “there’s only so much we can do,” laments Azadeh. Although numerous offers have emerged to help make Adhesive into a business, Bergeron is wary of the changes such a move might bring to the tone of the organization—“We don’t want to lose the character, the welcoming vibe.”

To this end, the company is exploring options for a revenue stream that doesn’t put its members off. Adhesive’s 5th birthday celebration, to be held September 27th at Bathhouse Studios in the East Village, will have a $5 cover charge to help fund the open bar and staff for the event. It’s a bit of an experiment—“We’re out of our comfort zone,” says Bergeron, “but we’ll see how things go.” Azadeh reveals that bar owners are often aghast that Adhesive doesn’t take a cut of the considerable bar sales it brings to its venues; such a move would mean Adhesive could profit from the events without asking anything of its members.

Whatever happens, the team has big dreams for the future of Adhesive. “We want continue to foster connections after the event is over,” Bergeron says. He envisions a more interactive website with a job board and a communication forum—a sort of “missed connections” section to facilitate further interaction among members. The team is also mulling a virtual space for members to display their personal projects, with the aim of the site being, as Shabnam says, “a platform for the work that inspires them to do what they do.” Adds Bergeron, “We want to get to that stage, but we’re still in phase one.”

For now, though, the response from members makes it all worthwhile—and explains why Adhesive has endured without funding for five years. As Azadeh says with a smile, “People always say, ‘You gotta go to Adhesive. It’s the best way to meet people.’ I get that all the time.”

Adhesive NYC’s 5th Birthday Bash will be held September 27th at Bathhouse Studios (540 East 11th Street). The party starts at 6:30. $5 gets you access to what promises to be a great open bar (not to mention a great crowd). For more information, visit http://adhesivenyc.com.