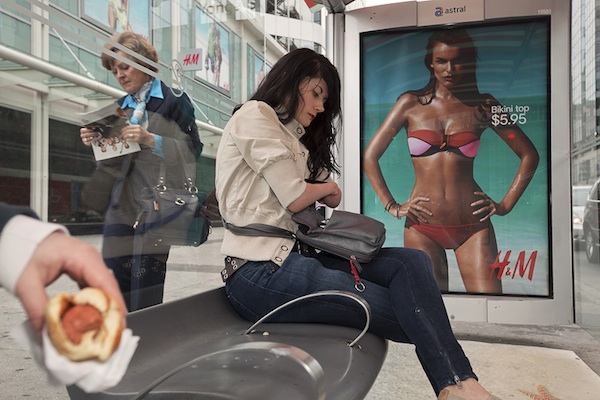 In the promotional video for his new multimedia project “Courtney. Red Dress, Normal Girl,” photographer Eric Kruszewski captures a series of short sequences of a woman in her mid-thirties—she’s slicing a tomato, cracking an egg, signing a document, drinking a glass of wine, and playing video games. The scenes are at once mundane and amazing, and might make some viewers more than a little uncomfortable.

Courtney Gilmour, the self-described “normal girl” in Kruszewski’s video, was born with only one full leg—her right leg ends halfway down the femur—and no hands. She was born in Sarnia, Ontario, the center of Canada’s petrochemical industry; doctors claim that Courtney’s birth defects are the result of her mother’s extensive exposure to chemical pollutants during pregnancy.

Kruszewski met Courtney by chance in 2011, after he saw her walking down the street in Toronto and stopped her to take a few shots for a photography workshop he was attending in the area. He was so taken by her that he returned a year later, in April 2012, to tell her story—and to embark on an ambitious project to bring awareness to the environmental issues that cause birth defects like Courtney’s. 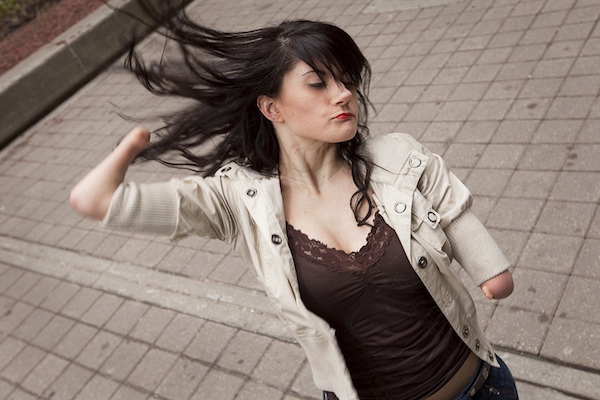 When asked what surprised him about Courtney, Kruszewski rattles off a list of adjectives in a reverential gush of admiration: Strong-willed, confident, smart, independent, sensitive to herself and others. “She has a wicked sense of humor—she’s actually an aspiring comedienne,” he says. “How could you even come up with that story? Here’s someone who can just put themselves in front of a crowd, having those deformations, those birth defects, and just put herself out there. I think it’s extremely courageous.”

She’s also a freelance writer, and contributes sketches to famed comedy school Second City. “She types faster then people who have two hands and ten fingers,” Kruszewski claims; a standout sequence in the video proves him right.

Indeed, Courtney is, in most ways, every bit the “normal girl” she defiantly claims to be—a fact which heavily influenced Kruszewski’s direction with this project, from the staging scenarios he chose to the use of video as his medium. Although Kruszewski was a newcomer to digital video, he felt strongly that viewers needed to see Courtney living her day-to-day life in order to fully understand her story and perspective. “How she walks, how she types, how she cuts something—to see one second, or two seconds, or three seconds of that is so much more powerful [than still photography]. It’s so the audience, who would normally see this person walking down the street, and stop and stare…I wanted to replicate that kind of feeling with the piece.” 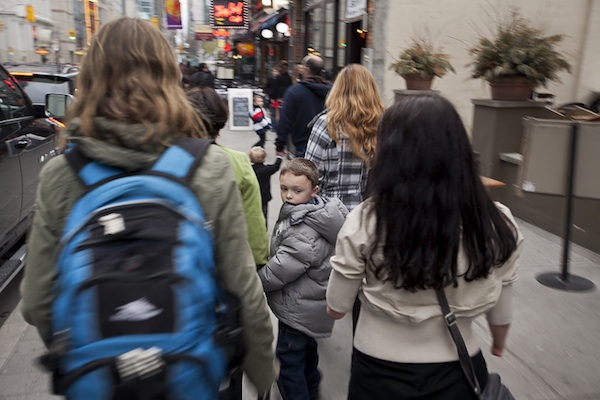 Putting the Pieces Together

Before switching to photography earlier this year, Kruszewski spent most of his adult life as an engineer, “pushing papers and sitting in meetings.” While working on assignment in Eastern Europe, he took up a camera in order to tell the stories of what he saw to his family back home. Photography became a passion for him, allowing him to interact meaningfully with the people he met on his travels. Although he bears no ill will toward his old trade, he says, “My heart wasn’t in it. I didn’t feel like I was contributing.”

This urge to “contribute” led Kruszewski to make Courtney’s story his first project as a full-time photographer; he was struck not only by her spirit but also by the great injustice of her circumstances. As he dug deeper, he found that her story is all too common—birth defects from exposure to environmental pollution are on the rise, not only in Sarnia but also in parts of the U.S. and around the world.

Kruszewski, who describes himself as a “professional storyteller,” wants to make sure this larger story gets told. He’s planning a thorough investigation into the petrochemical industry in Sarnia, with testimony from doctors, government agencies, and the chemical companies themselves. The main crux of the project, though, is an interactive map of Sarnia, with the photos and stories of his subjects plotted geographically in relation to polluted areas. In this way, Kruszewski is working to “put the puzzle pieces together,” trying to make sense of an issue that has been largely ignored by mainstream media. 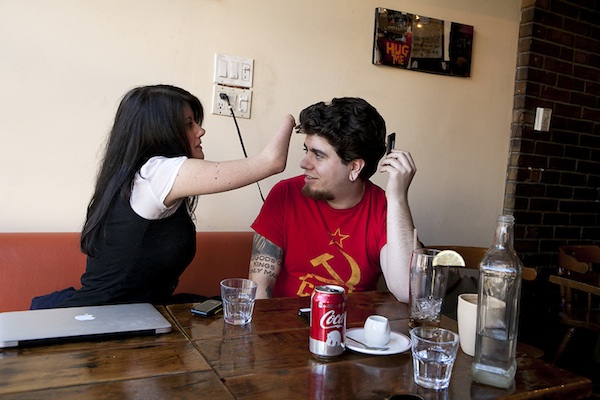 Kruszewski, whose portraits of Courtney recently won several International Photography Awards, hopes that if the story gets enough circulation and momentum, it might raise awareness about the dangers of environmental pollution—awareness that might one day lead to greater regulation of the chemical industry. In addition, he sees the map-based photo essay as a possible platform for others around the world to share similar stories and work for real change. “It’s not an overnight thing, but I’m fascinated by it, and if there’s some little thing I can do to bring change and awareness and knowledge to it, then that’s what I’m going to try and do. I can only hope that other people take notice or take action. We’ll see.”

Courtney’s story is just one example of Kruszewski’s drive to build connections with his work, with an eye toward showing his audience something meaningful they might otherwise have missed. “In this world, people are very caught up into what it’s like to be them,” Kruszewski muses. “Very few people get a glimpse into a different culture, or a different frame of mind, or a different important issue. I like using my camera for educating people, and for getting people to look at things in a different way.”