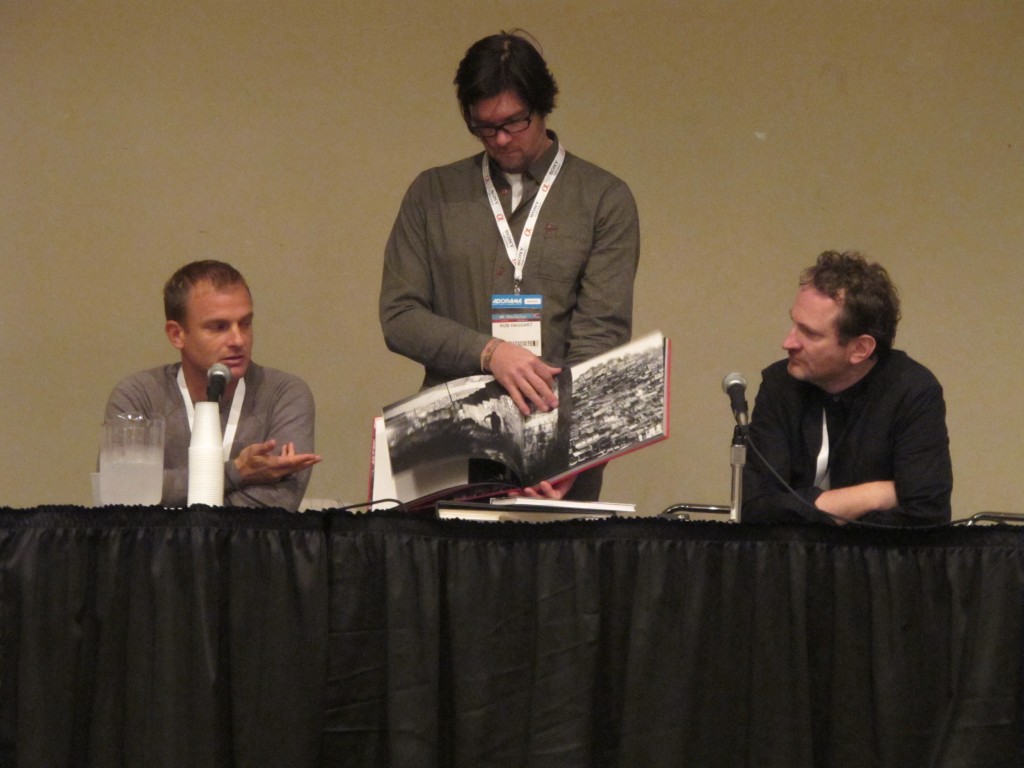 No more than five minutes after walking into day two of Photo Plus Conference+Expo 2012, I decided two things–one, attending the last day tomorrow–a saturday?!-is a little too masochistic, even for my taste; and two, I’m officially convinced the Javits Center was originally conceived as an airport, but because it was completed less than a year before the infamous stock market crash of 1987, known as Black Monday, and by the way, “celebrated” its 25th anniversary just last week(!), it subsequently had to devolve into an atrium, or commercially what’s known as, convention centers. This brings me to the other reason I will not be attending the third day of PPE (disclaimer: no one actually uses the acronym): I have officially run out of things to say about the Javits Center itself.

Chris Buck signs a copy of his promotional book, which he handed out after for free

To say that you must pick and choose between the seminars at Photo Plus is true only in so far that you realize you will only be able to attend two in their entirety. All the seminars occur from either 1:30pm to 3:30pm or 4pm to 6pm. I arrived shortly after 1 this afternoon, and by the time I navigated my way down to the first floor, I had exactly three minutes to choose my fate for the next two hours. I’m always interested in anything that attempts to offer practical advice on something as abstract, as say, for example, a career, and oh! will you look at that: “Making a Career in Editorial Photography.” Moderated by Rob Haggart, this talk/seminar/panel discussion featured famed photographers Jake Chessum, Chris Buck, and Chris Anderson. Chris A. looks like a young STING, Chris B. looks like Bono, and Jake Chessum resembles what Chris A. and Chris B.’s adoptive child would look like, which is to say, he looks neither like STING nor Bono, or really any other music icon I’ve ever seen. After a biographical rundown of their respective careers, Chris B. summarized their collective success as a result of the fact that, “we recognized this is something we’re good at.” In fact, None of them have ever worked as an assistant to a photographer.

Jake distinguished between a “jobbing photographer,” and a good photographer, the former of which gets paid for photographing, while the latter makes photographs that are so good that they get paid to do it, which upon my third read I realize actually makes a lot of sense. To this end, Chris A., a self-taught photographer sitting between his formally educated peers, considers photography a “dilettante profession,” which by definition requires no skill or commitment. This comment doesn’t cause the audible gasp from the audience I’d expected, but then again, the expo floor just two floors above does little to prove otherwise, offering the most automated imaging systems in existence, at least for this month. Chris B. likened himself to a phoenix, “rising from the flames to push through to find my way,” describing when he turned thirty.With this transition into a third decade of life came the moment when Chris realized his aesthetic, “you choose your subject, but your style chooses you,” he concluded. Jake discuss an epiphany of his own in explaining how developing your identity as a photographer is a game–not the kind with winners and losers, but rather a game in which everyone needs to win–mentioning the trinity of pleasing yourself, pleasing the subject, and pleasing the client.

Sometime within the last 30 minutes, the topic of editorial photography is described by Chris B. as, “going through a weird transitional time right now.” Jake attests to this by recalling the time he got flown to Calgary to shoot Heath Ledger for a mere quarter page spread, and elaborated, “the first thing they told me was if I don’t do it the way they want to, they’ll re-shoot the entire thing with someone else.” A re-shoot is now unthinkable in todays’ market, and moreover, as Jake said, “the reason why it’s so difficult for new talent to break in when you’ve only got one shot to deliver.” (pun intended, I assume)

The topic of social media as a form of self-promotion ignited a veritable war of words between the Chrises. The ever-reactionary Chris B. playfully butchered a Lisa Caldwell quote saying, “reach for the stupid people and you’ll hit a few of the non-stupid people along the way,” in his vehement offense against instagram. And described the site as a place for, “very interesting amateurs,” and insisted, “‘real photographers’ take real photographs.” To this point, the audience released an audible variety of “psh,” “pft,” and that one single, “ha.” Chris A. was optimistic that just being known by more people gets you more work, by “getting your name out there.” Although, as Chris pointed out, “out there,” has become bigger and more over-populated than ever before, so…hopefully you’re a good photographer (see above) and don’t have to bother.

With less than five minutes remaining, it is casually brought up how Chris A. is a staff photographer at New York Magazine. It’s a notable title, and more notable is why it’s considered notable to begin with, especially because his title is being called a photographer-in-residence in light of National Geographic Magazine ending its staff photography practice. Chris A.’s vision of the new model for editorial photography was as follows: “The advantage to having a single photographer for your publication is the loyalty,”–Chris takes pictures exclusively for New York Magazine–” familiarity with the publication, a set annual price,” i.e. no day rate, “and no space rate.” In Chris A.’s mind, it’s only a matter of time before the rest of the few printed publications that are still around come around and realize the photographer-in-residence for themselves.

relative to its size, this is actually crowded

Overall, the seminar was provocative, enlightening, and as should be self-evident by now, worth mentioning. The seminars are arguably the most self-indulgent aspect of Photo Plus, allowing you to sit back, and watch and hear photographic celebrities either allay your concerns, inspire your creativity, or at the very least, reinforce a sense of purpose and meaning to making pictures. Before departing from Photo Plus, I revisited the expo floor, circling the room in a symbolic victory lap,  feeling accomplished for what ultimately amounts to a little walking, mostly sitting, and some occasional photographing. As infinitesimal as the array of photography stuff packed into the expo floor may be, it remains an efficient comparative shopping opportunity for those who can never be talking shop enough. And because I’m a sucker for most anything interactive, I was pleasantly surprised to see that name brand cameras, equipped with lenses worth more than your total annual rent, were available to test shoot. I take one final look around, admiring the photography frenzy in all its fanatical freneticism, take a deep breath of photosphere, as it were, and then finally, take my leave. Fare thee well Photo Plus, until next year…

mounting evidence for my airport theory