Internet video is evolving. Originally the breeding grounds of cheap flash videos and lo-res home video bloopers, the world wide web has now become a robust source of everything, from nature documentaries to funny cat videos (some things never change). While the content has come a long way, however, the viewing experience largely hasn’t. Redux TV seeks to change that. Rather than confine the viewer to a computer screen, Redux allows for Internet channels, like our very own Resource Television/RETV, to stream to HD TV’s worldwide, encouraging a more relaxed, “lean-back” viewing experience, emphasizing quality content over quick clips. I sat down recently with Andrew Schneider, one of the minds behind the blossoming TV app to discuss its past, present, and future.

Redux originated as a UC Berkeley project. How did the idea come up? What were the early days of Redux like? How did it grow into what it is today?

The main idea behind Redux came to us pretty quickly. Most of us know web video uploading has grown exponentially over the last few years, and even more of us know it’s a pain to find content worth watching. We always knew we wanted to help solve this, and we realized something pretty simple: when I come home, I plop down on my sofa, turn on my TV, and channel surf for a few hours. That’s the time and place I want to be surprised by something great. Regardless of how popular watching video on a computer has become, it pales in comparison to being in the living room. And, thanks to you guys and your readers, there are tons of truly amazing web-exclusive videos being produced that deserve to be seen somewhere better than a computer screen. We saw an opportunity in building a “lean-back” TV-like discovery experience that was natively built for Connected TVs and tablets, offering spectacular content you can consume easily and passively without having to mess about with the remote. That, and we all pretty much gave up on old guard TV programming a long time ago. Not that everything on TV is garbage, but the refreshing diversity and honesty of independently produced web content has eclipsed the majority of what I see on broadcast and cable TV. It really all comes down to what you want to do. If you want to search for a specific video or find content by keyword, YouTube and Vimeo have you sorted out. We’re not touching that, and it’d be foolish for us to try. However, on the living room TV side of things, most of the time you’re not in search mode but in discovery mode. You’re not looking to spend time and effort hunting and pecking with a cumbersome remote, with little confidence that what you find will look awesome on your 60″ LCD—instead, you’re looking to lean back and let the good stuff find you. That’s what we’re handling Everything comes your way through a TV-like interface. What you see is only high-quality, curated content, all packed into cable-like channels you can surf through like old school TV.

Talk to me a little bit about the curators. How does one become a curator? How do you make sure they don’t go rogue and start posting things you would rather not have on the site?

Anyone can be a curator, though only the best of the best get featured on our channel guide. We have an editor selection system that helps us find, feature, and support these elite members, helping them manage an excellent channel that gets millions of views worldwide. All content selection and programming on Redux is done by tastemakers, organizations, celebrities, and those with domain-specific expertise. In other words, people our audience trusts. And they’re people we trust too—it’s their channel; they take it seriously and they conduct themselves accordingly.

Obviously, this being the Internet, it’s important to hop on to viral bandwagons (a phrase that would’ve meant something completely different and horrible a couple decades ago). However, it’s also important to find original, interesting content that hasn’t been seen before. Do you think your curators do a good job of striking this balance?

Our philosophy about video is pretty different than the Internet’s, and usually entirely divergent given how different video looks on a flat-screen TV, versus a corner of a 15″ laptop screen. In most cases, we’ve noticed that clippy viral videos tend to do poorly on Redux because, well, they kinda look like crap on your 60.” Conversely, well-produced, more nuanced videos that do poorly online perform really well on Redux, likely because you can appreciate them in all their subtle glory. Conveniently, the latter is the type of stuff that our curators tend to share, both because it looks great on a TV, and because they can proudly be the first to blow it up it to a big audience. 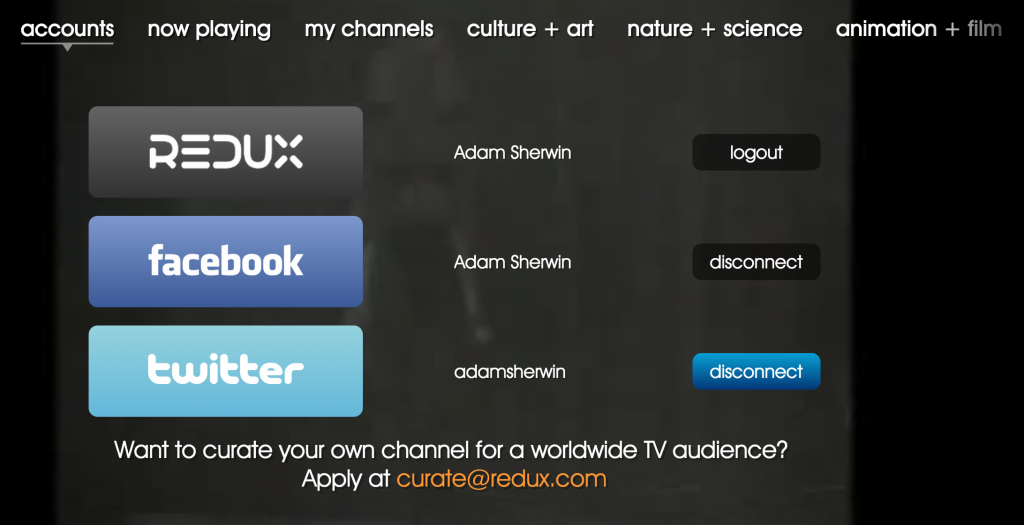 Talk to me about the channels themselves: how are they created? How many are there now? What types of channels are there? How do you decide on which channels make the cut?

Just as anyone can be a curator, anyone can create a channel, but only select ones make it to our guide. We regularly add to and refresh that list to make sure it’s the best available, and we have a few hundred of channels up and running at any given time. Everything’s in easily sortable buckets based on subject, like nature + science, art + culture, music, sports, news, vehicles, etc. We try to keep the channel selection as diverse as possible to satisfy every possible niche, as deeply and interestingly as possible. Some we come up with and suggest to curators and organizations we think would enjoy powering them, others we spot already kicking ass within our community. As for what makes the cut, any subject—no matter how niche—can be made fascinating with good storytelling and production value. A video I recently saw about algae in our nature channel backs up that belief nicely.

What are some of the most popular channels? What are some channels you wish were popular, or that people would discover?

The biggest crowd pleaser is Nature’s Imprint, our premier nature and science documentary channel. It’s got a great mix of cute animals, ferocious things devouring one another, and some algae thrown in for good measure. And it’s pure HD eye candy. Unsurprisingly, our foodie channel For the Love of Food gets big views too. Our Tech and Rides channels—curated by TechZulu editor Efren Toscano and professional petrolhead Ben Mitchell, respectively—aren’t far behind. Caught on Tape, our schaudenfreude, football-in-the-groin offering is the ultimate guilty pleasure. Shouts to curator MikeonTV, who is somehow able to find this footage days and weeks before it goes viral. ??As for underdogs, I’m a big music guy and I love our more niche music channel offerings. I also learned long ago that my musical niche needn’t be anyone else’s prerogative, and I’m happy having those remain a niche interest on the site—but seriously, all the cool kids watch Music: Backstage. 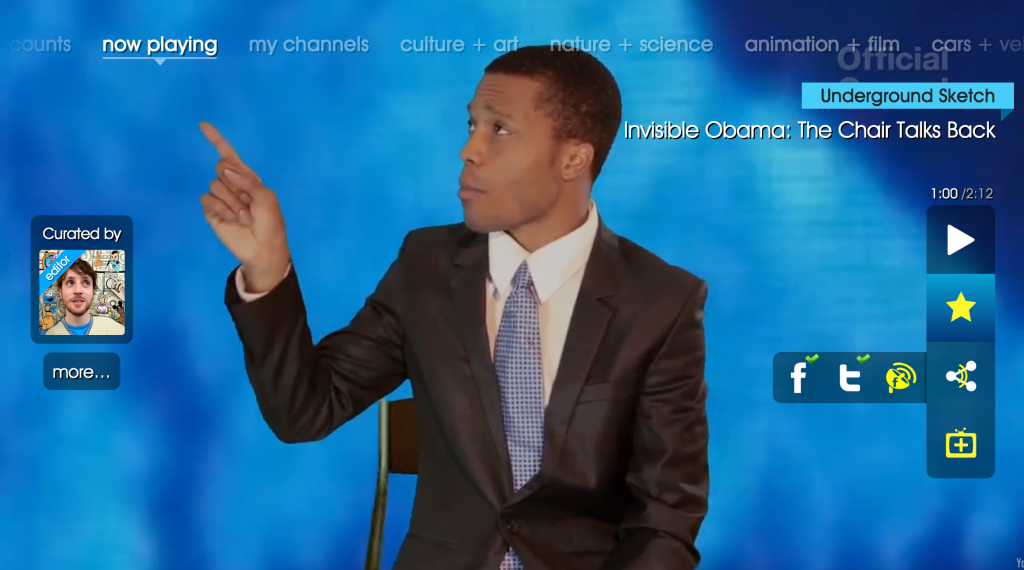 Are there any safeguards in place to prevent various channels from cannibalizing each other’s videos? Or do you prefer to let the cross-channel crossover content (CCCC) flow unabated?

Pretending that I haven’t missed out on this trendy new acronym, I’d say we actually consider CCCC as a convenient means to discover other channels within our network. If two curators happened to share the same video, though manage two fairly different subjects, what a serendipitous way to discover a potentially relevant new channel and curator! If we detect this, we’ll actually suggest the other channel on the one you’re currently watching. It reciprocates favorably within the entire community, and most importantly, helps the audience find stuff they’ll like.

Are there any plans to transition into a more Netflix or Hulu-esque service and offer full TV shows and movies?

Oh yes. We have partnerships with some larger studios and media houses that want to distribute their catalogue through our network. While it’s mostly shorter-form content at the moment, we’re gradually working it up to longer stuff. We’ve also entered the premium realm by working with movie producers through Redux for Artists. We recently direct-distributed Czech indie delight Kooky internationally in conjunction with the Humble Bumble indie game folks, and did the same for a horror-film named Smiley, produced by and starring some of YouTube’s heaviest hitters. You can pre-order Smiley at smileymovie.com, and Redux is powering the film streaming across the web, mobile, and TV. We’ve got more direct to artist launches coming up, including some with a few currently unmentionable top-grossing comedians.

So what does Redux offer as a platform to artists?

Major Hollywood artists, filmmakers, and comedians have great TV-quality video ready to go and want to sell directly to their audience, but it’s an expensive, daunting endeavor—particularly if you want a slick discovery and consumption experience across the web, mobile, and as many connected TVs as possible. Redux for Artists lets artists sell across all platforms without having to deal with any upfront costs, technical details, or anything else they shouldn’t have to deal with. And it gives them a slick experience that benefits from our distribution, marketing, and discovery approach. Which is all to say they’ll get paid more, which they usually like. 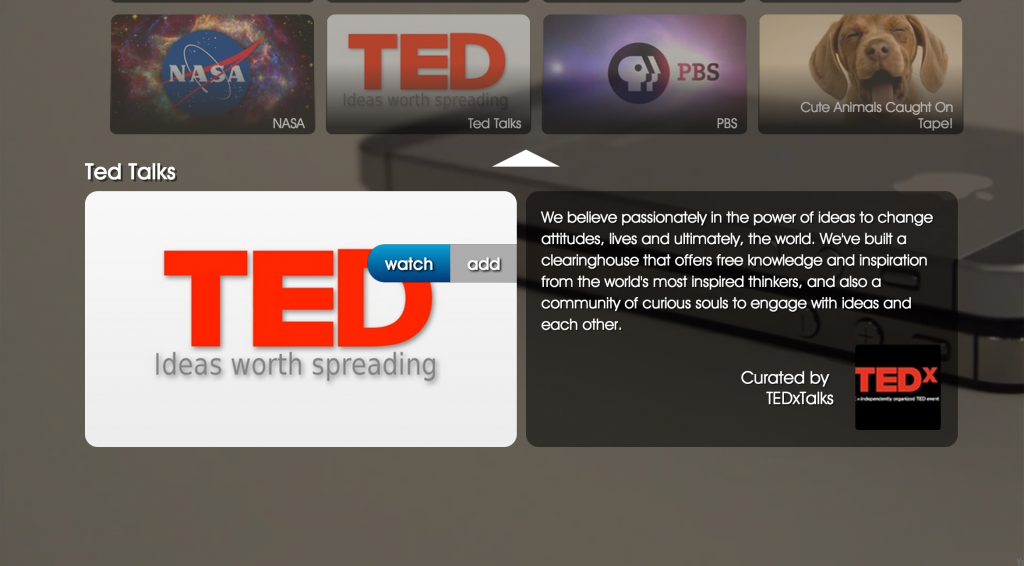 With all the emphasis placed on “lean-back” viewing, is your office plagued by chronic back problems?

At one point, yes. We’ve since replaced all 1.0 seating with yoga benches and inflatable chakrapedic orbs. We credit our success to these orbs. ??In all seriousness though, how does the emphasis on home-viewing (as opposed to workplace procrastination) change the video-watching experience??It’s the difference between a candy bar and a gourmet meal. One works as a quick snack that provides momentary satisfaction with less-than-great substance, and the other provides a rich, replete experience that leaves you feeling fulfilled and better for it. Like the feeling I get by giving obnoxiously prosaic responses in interviews.


Where do you see the future of Redux headed?

More content partners (i.e. you guys), more featured placements with every hardware manufacturer making anything that is or connects to a TV, and more audience. Also, new improvements to better the core discovery and consumption experience.??We have deep integrations and home-page placements with the majority of the top Connected TV manufacturers: Sony, Panasonic, LG, Samsung, Roku, Western Digital, NetRange, and a few other big folks we can’t talk about yet. We’ll be on 40 Million+ devices by end of year. Things are looking good, so keep it, erm, tuned!

If you’re interested in the platform, shoot them an email at artist@redux.com.