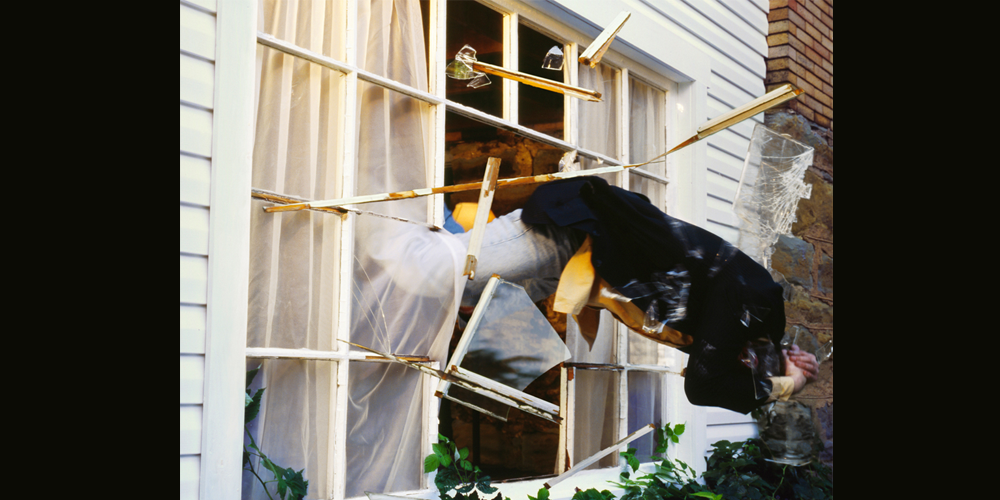 Kerry Skarbakka and The Struggle to Right Oneself

Photographer Kerry Skarbakka shares a little bit of his life, how he got into photography, some of his very own techniques and an inside look into his powerful series The Struggle to Right Oneself.

Tell me a little more about yourself.

I was born in Duluth, Minnesota and basically raised on a small farm in Tennessee. With a good portion of my immediate family gone, I don’t have a true home. Pretty much all my life, I’ve traveled, moved and moved again. Currently, I live in the quaint mountain town of Prescott, Arizona with my partner of the last 14 years, Tracy.

How did you get started in photography?

My background is in sculpture and painting. As a kid, I learned how to take pictures and use a manual camera with my brother, but never really took to it or understood it as a language. It wasn’t until I needed a camera for a conceptual art course during my last year at the University of Washington, that I actually attained one . . . by default. For the assignment, I borrowed an old AE-1 from a friend of mine. During the same semester, I lent him some money, in which he offered the camera as payment.  As a poor student, I needed the money more than the camera, but as it stood, it looked like I wasn’t going to get that money back. So I took the camera. I kind of look at it as if it was the best investment I didn’t make.

After undergrad, I moved to Japan. There, in the land of cameras, I found a more practical use of the camera as a means to an end for art making. The difficulties of living abroad put stress on navigating the needs an art practice that required a studio and facility. I still painted and made objects, but photography was becoming my new buddy. It wasn’t until two years later upon returning to the states, that I enrolled in a photography program at the Northwest Photographic Center in Seattle. I guess it was then, when I made the commitment to really investigate photography as my primary medium. However, it wasn’t until graduate school at Columbia College in Chicago, that I began to understand, not just the potential of the photograph, but more importantly, how I could infuse the aspects of my former studio practice into the conceptual framework of my newfound expression.

How did you come up with the idea for this series?

As artists, we are always looking for ways to access our creativity. Because the only thing we truly know is our self, I believe that some of the strongest art is made from one’s personal experience.  Therefore, I began this project by tying together several of my other passions and interests to make work that would be mine, from me. In addition to my pursuit of the arts, I have a background in various martial arts, acting and rock climbing, all of which were quite enjoyable as their own activities. So, I decided to combine these threads within an art-making context. Martial arts: for the love and physicality of the “sculptural” body, as well as the strength to produce the images. Acting: for the gesture and plausibility of the moment. Rock climbing: for the use and knowledge of ropes and rigging to help aid in my safety.

The concept behind the work originated in 2001/02 as a way to deal with my inner turmoil of anxiety and depression to the loss of my mother to brain cancer and then to the tragic events of Sept 11. By using the methods stated above, I discovered how I could realize this project through the act of giving up control and falling, projecting, jumping, flying, dreaming and levitating.

It’s not fair to the message, however, to only give attention to how the work began; its catalyst. Since there is so much uncertainty in this world, right now and tomorrow, if this work were only about my mother and/or 911, there would be no reason to make it. For me, this past ten-plus year investigation has seen many different manifestations of its meaning beyond its original intended response. I believe the work has always drawn parallels much more related to the challenges of human condition and just being, than it ever did to my personal concerns.

Can you explain the technical aspects behind the photos? How do you create them?

I guess the secret is already out on this one….The images are all made on location. I set up the camera, compose the shot and perform the necessary activity. Once I decide upon the right scenario, I usually have to work very quickly. If it’s possible to make the action sequence relatively safely, I then perform the activity for the camera until I get the desired shot. Some of the scenes are too dangerous to do without protection, so often I work with ropes and rigging or mattresses and boxes to catch my fall. If I can’t hide these devices with unique camera angles, I’ll remove them digitally in post-production.

Why do you use yourself in the photos? Have you ever hurt yourself while on set? Who do you get to shoot for you?

I suppose it’s always been rather expensive and difficult locating models, so I took the job on myself. It allows me to try new things and just enrich my life for the experience. I like to be the model of my own work, but it’s very frustrating at the same time, both in terms of it being mostly painful and a pain in the ass to make. Not being able to look at what you’re trying to create until you’ve done something that hurts, only to find out you have to try again and again until you get it right…well, that isn’t as fun as it sounds.

This gets asked a lot, and yes, I do get hurt from time to time. I’m getting older, which probably means I’m getting smarter and really I don’t want to become a sacrifice to my artwork, so I’m as careful as I can be. But I do still dumb things at times. Most serious injuries include a broken rib and some sprained ankles. Also, I suffered a bad cut on a shoot for a separate series, Fluid, from accidentally kicking some live coral underwater. My body has taken a bit of damage and it seems I have incurred chronic neck and back pain from years of making this work. But apparently those problems also come with age, from what I understand. Not looking forward to finding this out.

My partner, Tracy, is behind many of the shots. However, on some specific shoots, I have had help from some of my amazing photographer friends. Others come from regular friends, acquaintances, and even an innocent passer by or two.

Is there a reasoning behind your wardrobe? I’m wondering about the suits, in particular.

The suit is a representative uniform belonging to an, “every-person.” I wear clothing that is either metaphorical in its use of color and/or it’s cultural significance. I can find that makes sense to the needs of the image. But it is never about fashion. In a way, a suit has the best chance to retain a certain timeless quality, which sticks with the image over time.

The same goes with my identity, I always attempt to obscure my face so these are not immediately categorized as self-portraits. I want the viewer to discover his or her own resemblance within the context of the image.

How did you pick the shoot locations?

Choice of locations often happens organically when I see a place that I just have to work with. Other than that, once I’ve come up with an idea, it’s time to find the place that fits the idea–like location scouting for the film industry. Like everything else, the meaning of the environment is always important.

Do you have any upcoming shows or exhibits?

Yes, I will have work at AIPAD in NYC in April with Kopeikin Gallery. I have a solo show at the same gallery in Los Angeles in May. “Ten Years of Falling” opens May 25th– July 6th.  In April, images and video from my Creative Capital supported project, Fluid will be included in show honoring the inventions of Jacques Cousteau. In conjunction with Cinema Planeta and the Cousteau Foundation, the show will take place at the City Museum in Cuernavaca, Mexico.  Finally, I have work going from my Struggle series going to SNAP! Orlando, a weekend long photography festival held in the city of Orlando in the beginning of May.

Take a look at a few images from the series: