We Met on the Internet by Jena Cumbo

“Given the pace of urban life and the digital necessity of our social media drive society, connecting online is the new normal,” so says New York based fashion and lifestyle photographer Jena Cumbo. Her new and on-going series, “We Met on the Internet,” consists of portraits of couples that first began as virtual strangers on dating websites. A former online dater herself, Jena describes, “It’s never really worked out for me, but I have a lot of friends for whom it has. I personally don’t think it really matters how a couple meets but at the same time I also think its sort of fascinating that so many couple do indeed start via the internet in cities where you would think the possibilities of meeting people are so high.” Nearly all of the couples Jena has photographed live in or near New York City. Jena first photographed personal friends before soliciting willing subjects on Craigslist, and eventually, a few came to her by word of mouth. The number of respondents far outnumbers those selected for the series, and Jena says, “At least half of the couples that contact me met on ‘ok cupid’ […] I’m in the stages of starting to be more selective and look for couples with more interesting backgrounds and different ways of having met online.” In order to capture the reality of these couples’ virtual love connections, Jena typically photographs her subjects in their shared apartments, or at least, “somewhere they like to go as a couple or a place that’s significant to them,” she says, and elaborates, “I try and have them ‘do something’ or give them an activity that they would do together, and go for a more candid shot. Those tend to be my favorites, they just seem more real to me.” However, in effect, the images do little, if anything, to impart how these couples began via the Internet, which is why Jena enlisted her “writer friend,” Gina Tron to interview couples to provide brief synopses of their stories. As a contributing editor at international lifestyle brand, website, and quarterly magazine Ladygunn, Gina has collaborated with Jena before, pairing their words and images, respectively. Jena plans to continue photographing for the next month, or two, ideally amassing twenty couples, or so, and is considering to publish her images as a coffee table book. “I’ll have to really research what would go into all that, but I think it would be worth it,” she concludes. Self-proclaimed shy comic book artist KJ is a 25 year old living in Bushwick. The illustrator and animator had turned to OkCupid for dating because she feels that she is not very personable. Though, she discovered that many used the website to get a little too personal. Most just wanted to hook up, she confessed. Sal, a 20 year old student and programmer living in Newwark, signed up to OkCupid last summer and two weeks later found KJ. They had their first date around August 20th. The date began in lower Manhattan, when they got lost trying to find Vanessa Dumpling in Chinatown. After they made it to Vanessa’s they went to Sugars, a cafe in the Lower East Side. That’s when the date really took off, says Sal. They ended up spending so much time together that Sal only got a few hours of sleep for work the next day. Sal really fell hard for KJ. I scared her a little bit, I think, he said. Yea, a little bit, admits KJ. –Gina Tron 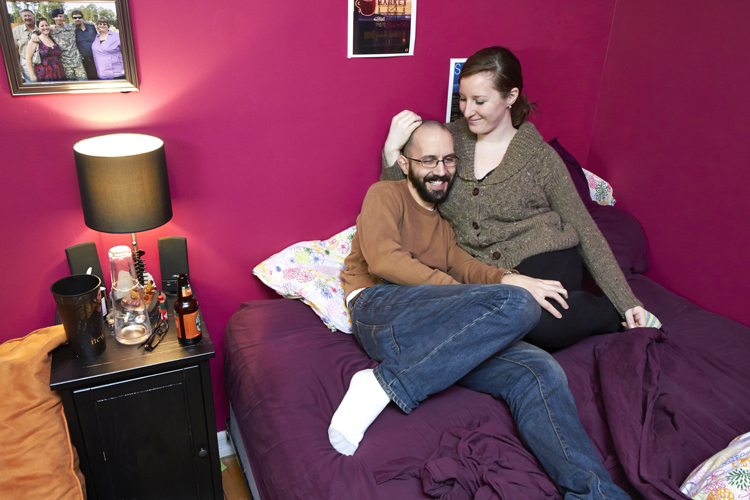 35 year old Mark and 27 year old Jackie compliment one another. Our interests are different, explains Jackie. We try different things because of one another. Mar has introduced Jackie to the world of comic books. Meanwhile, Jackie has an adventurous and outdoorsy spirit. They travelled as a couple to Montreal where they went snowmobiling and dog sledding. The two had their first date on October 7, 2011, after conversing on okCupid. They also exchanged some late night texts because Jackie is a nurse and was working night shifts. When their relationship began to escalate in seriousness, Jackie switched to a day shift to spend more time with Mark who works two jobs. They now live together in Hamilton Heights.–Gina Tron