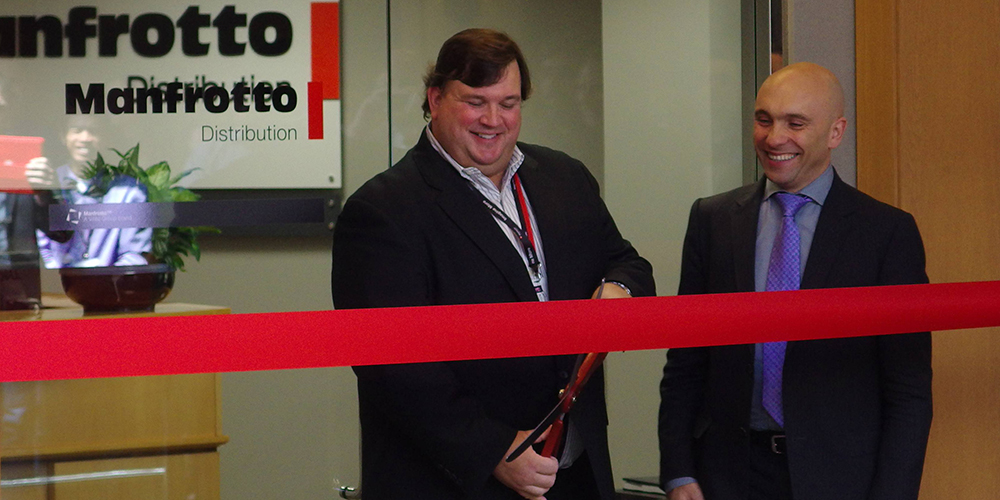 Last Wednesday, April  17th, was the official ribbon cutting ceremony of Manfrotto Distribution’s new U.S. Headquarters in Upper Saddle River, NJ. Though the world economy is still in a state of fluctuation and recovery, Manfrotto has continued growing over the past several years. The move to the new location comes as a result of that continued growth. Manfrotto’s new U.S. home has a spiffy new, forward-thinking, open-style layout. The cubical walls are barely chest high, every office door is left open and display stands featuring the various Manfrotto product lines dot the pathways. The office is complete with big picture windows and a view of a natural, wooded area, which I only bring up because as a recent transplant from Iowa to NYC, I miss trees. The switch to the open-office layout was about more than than just adding legroom for the sixty-some employees working in the office. It has greatly increased the different departments ability to collaborate, develop new ideas and enable them to get products to distributors twenty percent faster than before. This is good news for anyone buying Manfrotto products.

Maybe you’re thinking, “so what? I buy all my stuff online. I never have to leave my house or wear pants.” Well it’s good news for you too, you pants-less weirdo, because even when you buy gear from Manfrotto’s website, it actually gets delivered to you from the nearest distributor. Manfrotto’s business model lets you get all the gear you want without leaving your house, while still supporting the brick-and-mortar stores where you can go and play with their gear before you buy it.

Resource had an opportunity to tour the new location and despite Adam’s man purse and insistence on playing with every piece of gear in the display room, we were invited to sit down with Manfrotto Distribution’s Managing Director, Bill Drysdale and Vitec Group Divisional Chief Executive, Marco Pezzano. But not before being quickly lead into a board room with a PowerPoint presentation ominously at the ready.We settled in, bracing ourselves for a drawn-out presentation steeped in financial data, but what we got instead was mission statement for Manfrotto Distrubutions’ future plans as well as a sneak peak at some new gear in the works. In short, awesomeness. 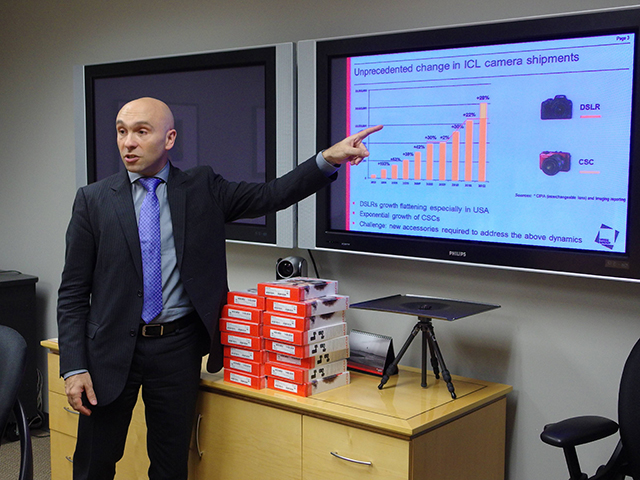 While We can’t reveal everything we saw, the stuff we can talk about is pretty cool. Pezzana opened by saying that professional photographers have always been, and will always be the core of Manfrotto’s business and that it’s Manfrotto’s goal to continue to support the professional working photographer. But he went on to explain how it was through developing products for the emerging photographer that Manfrotto has been able to to continue to grow in an uncertain economy. One of these products is their CSC tripod the “Pixie,” a tabletop tripod that doubles as a stabilizing grip for video, when the legs are folded up. Another is the Next Generation of Klyp lights for the iPhone 5, The small but powerful light, attaches, via a special case, to the side of the phone and has simple to understand dimmer switch, providing constant light and dramatically improving the image quality of both stills and video taken with the iPhone 5. Pezzana explained that it was Manfrotto’s philosophy to provide the best possible gear to amateurs, so as they develop as photographers and look to to step up their gear to the next level, Manfrotto has established a solid reputation for quality.

The idea of quality at all levels is one Manfrotto really takes to heart as demonstrated by the their 500 Fluid Head which one best Best Camera Support at NAB 2013. In the display room, Paul Zakrzewski walked us from the professional to the entry level, explaining how they were able to transfer as much of the quality from the professional level down to the entry level. 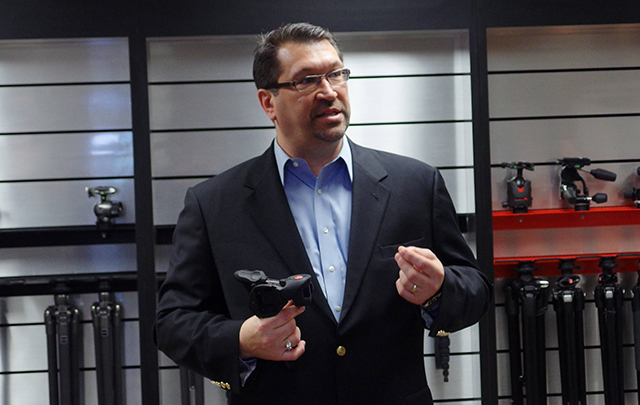 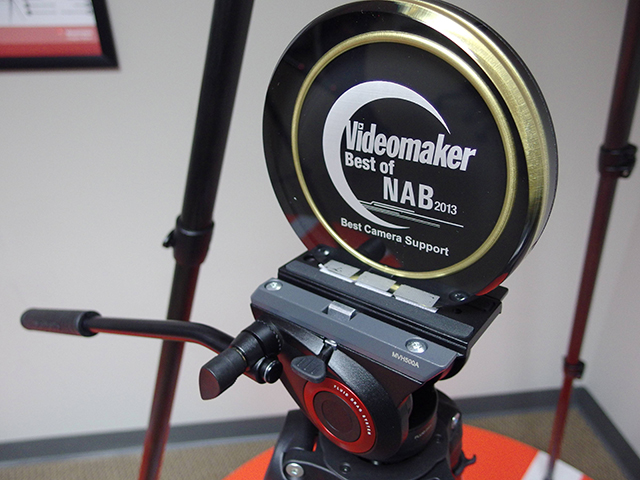 The Manfrotto 500 Fluid Head, winner of Best Camera Support at NAB 2013 as decided by Videomaker.

Improving collaboration to provide the best possible product was one of the main reasons behind this move. The ease at which collaboration can happen is especial important when you remember that Manfrotto is part of a larger organization, The Vitec Group; which is a world leader in imaging.  Manfrotto Distribution is not only responsable for Manfrotto products in the US, but  Avenger, Kata, National Geographic, Elinchrome, Lastolight, Metz, Gossen and Rotatrim products as well.  By having these brands separated by only a few inches of cubical walls instead of entire buildings, the collaboration between them has gotten a lot easier. One noticeable perk from a customer’s perspective is that Manfrotto will be releasing a new entry-level lighting kit that will contain pieces from those different brands. The new kit will allow photographers, who are making there first moves into lighting, to have a highly-functional set-up, that won’t break the bank and would be more universal useful than one first-time light users could put together for themselves.

I spent a few hours walking around the headquarters, speaking with different people within the company and the impression I was left with at the end was that Manfrotto is a company that is genuinely concerned with treating everyone they do buisnes with, from their customers, distributors to their employees, the best they possibly can. Besides having the capabilities to fill online orders for their distributors and vendors as needed, Manfrotto still builds more than seventy-five percent of their tripods in Italy, where the company was founded and it’s nice to see a major company making it a point to take care of the people they do business with, whether it’s by offering support for their users, or distributing their online orders through retailers or not moving manufacturing too the cheapest possible location. So when I do come across a major corporation making an effort to do right by their customers and their employees. I give them an approving nod. 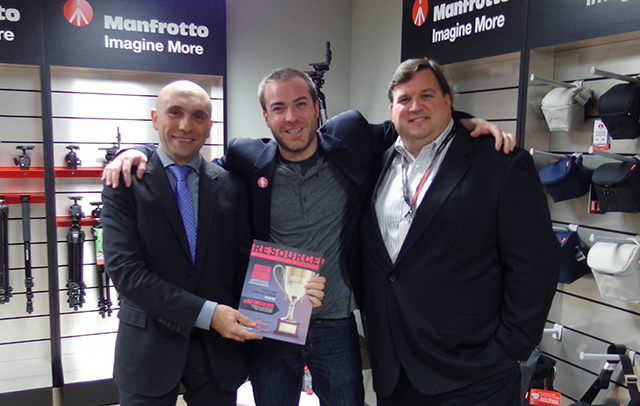