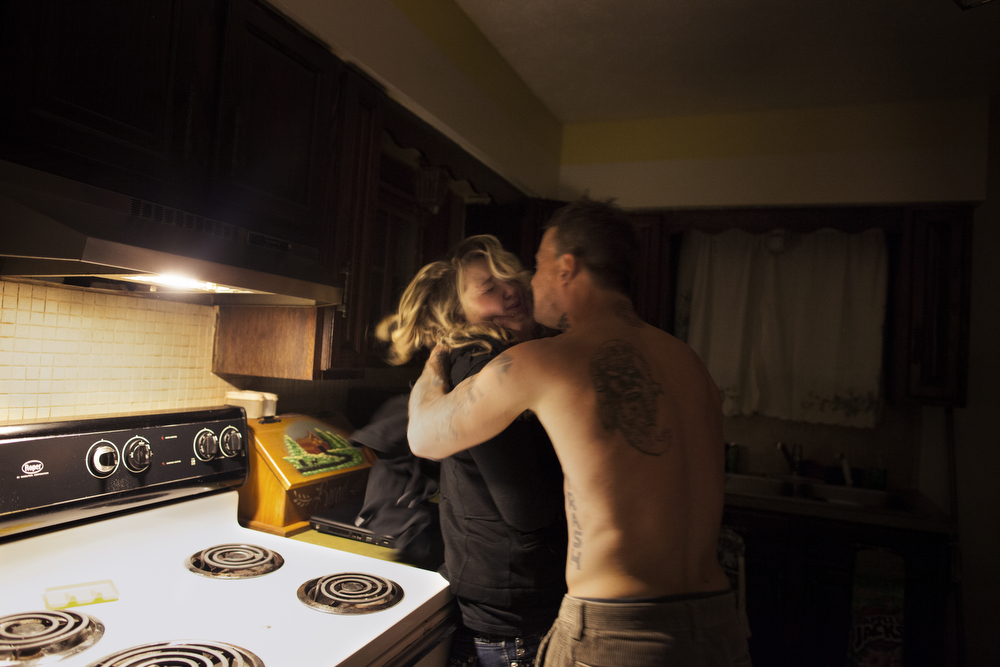 By Matthew Corkins, with additional notes by Aurelie Jezequel – Photos by Sara Lewkowicz

When Sara Lewkowicz was documenting the life of an ex-convict, an unexpected and sudden escalation found the young photographer fighting to keep a hold on her photos. The Ohio University graduate student met couple Shane and Maggie and became interested in showing how hard it is for a felon to reintegrate normal society. One night, while photographing the couple, the situation became violent: Shane attacked Maggie.

Sara’s fight for her photos had begun.

The police subpoenaed her photographs to be used as evidence against Shane. Unsure of what to do, Sara’s professor told her to contact Mickey Osterreicher, National Press Photographers Association’s general counsel. NPPA‘s and Mickey’s help have been one of the “saving graces this year,” Sara said. In the end, Shane pled guilty and the photographs were not needed—this, however, did not end Sara’s battle.

The photos of Shane and Maggie premiered online for Time magazine in conjunction with the debate on the Violence Against Women Act (VAWA), and soon, they went viral. “Time said that article was one of the most viewed pieces on their website,” Sara said. But going viral is not all that glorious when the rights of the creator are abused.

“The Time story appeared, and people shared it on Facebook,” Sara said. “I only saw the ones I was tagged in, and it was like a couple hundred! I stopped counting at a certain point.” Next came more articles as Sara sold the series to different publications, like CNN and Brazil’s Claudia. But the photos then started to show up on blogs—with and without her permission [full disclosure: Resource’s blog joined the frenzy and didn’t properly clear our use of her images, a mistake we regret and won’t do again]. The images are powerful and unique—domestic violence happens mostly without witnesses, far from cameras—so they really resonated with a lot of people. The stalling of VAWA in Congress only heightened the issue of women’s protection and the importance of Sara’s images. “People just started sharing them in their eagerness to say, ‘Hey, look at this,’” Sara said in regard to social media and blogs. “Most people aren’t doing it out of malice; they’re just thinking, ‘I want as many people to see this as possible.’” 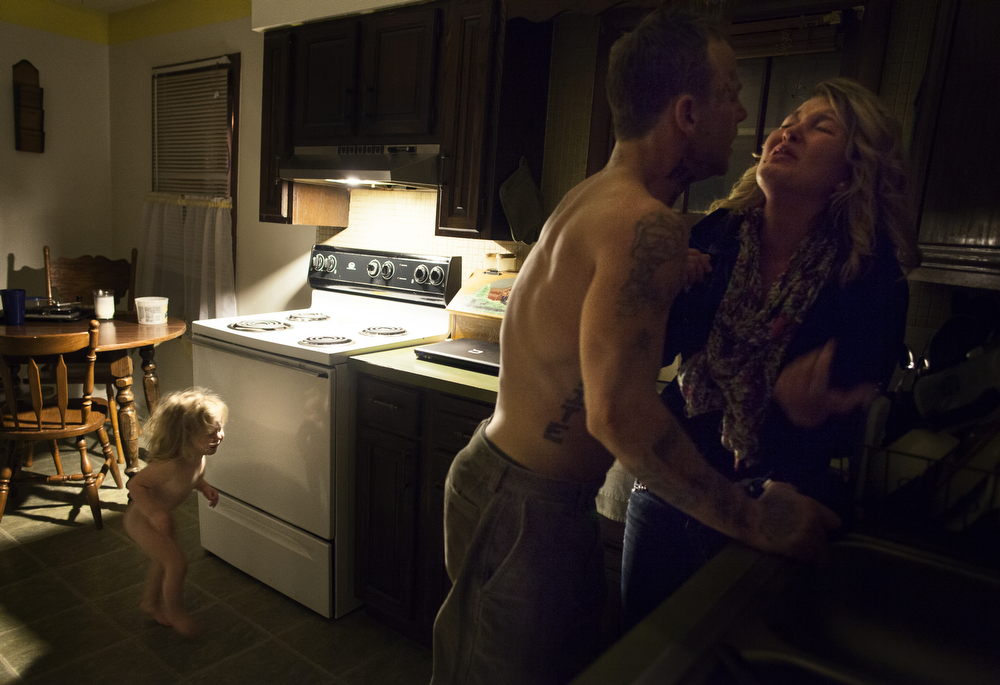 The problem is not many people were asking permission to use the photos, and even fewer were paying for them. As more people shared them on social media and their personal blogs, the images’ value lowered. “The more the piece is out there, the less exclusive it becomes. And the less exclusive it becomes, the less reason anybody has to contact me and pay me for my work,” Sara explained. The problem is the digital world and blogs and social media are all still new, and most people don’t know the rules—especially when it comes to paying for content. In time, this might be fixed, but for now, the Internet is a Wild West, seemingly not subject to law. But this free for all is unsustainable for content creators like photographers. “It’s not about me getting rich off of this,” Sara said. “It’s more about that I can’t continue to do this kind of work if no one wants to pay me anymore.”

Instead of pay, blogs offered Sara exposure for the use of her photographs. While to many photographers the mere idea of being seen sparkles like gold, Sara knew better. “If somebody wants to buy your work, it doesn’t matter that you’re a 21-year-old college junior. There’s value to your work and you should charge a market value for it.” She also knew the exposure most blogs offered reached nowhere near as high as the exposure Time gave her. “Most people who contacted me told me they saw the images on Time. Ultimately, Time gave me great exposure—and they paid me.” The question is why can’t everyone else do the same?

Bloggers and publications gave Sara many reasons why they didn’t want to pay. Images of domestic abuse presented an issue of ethics. “We don’t want to pay for these images as we don’t want to send the wrong message,” someone would say—as if Sara was responsible for said violence (war correspondents are not held responsible for the horrors they report; why would she?). Others looked to peers to figure out what was justifiable. “Blogs use each other as a barometer of what is acceptable,” Sara said. “It doesn’t matter if someone else is doing that—that shouldn’t be a measure for whether you think it’s OK to do.”

While copyright infringement is part of some companies’ business model—they just pay the occasional artist who comes knocking on their door but don’t bother otherwise—most bloggers simply don’t know they should ask permission. Most blogs are not journalistic but personal: the person in charge more often than not has not studied the ethics of journalism and the importance of copyright laws. Blogs are opinion pieces, existing in the Internet ether where everything is seemingly free and accessible.

Digital theft is hazy or remains unnoticed for many—users don’t have the same perception of it as they would with physical images. When someone steals a movie, CD or work of art, the owner no longer has that item, whereas nothing is “missing” with digital theft. Instead, the item has simply multiplied, increasing its exposure and reinforcing its seemingly accessibility—a never-ending loop, feeding upon itself. But as Sara stated, “Just because something is on a website doesn’t mean you can use it.”

On one hand, artists’ work can scale the length of the Internet in a matter of days or hours. On the other, exclusiveness (and its correlative, value) can become practically nonexistent. “I went overnight from being a totally unknown graduate student to having people wanting, valuing my work,” Sara reflected. “It took me some time to understand that I was entitled to contact these places and say, ‘Hey, this is my work. You can’t just take it for free.’ It has been a very interesting experience. It’s been really exhilarating, but it’s also been really frustrating at times. It’s especially weird when you contact somebody and they say they’re doing you a favor. There’s a part of you that feels bad. You feel like a jerk for saying, ‘I know you meant well, but you’re not doing me a favor if you’re not paying me.’ That’s something you have to get used to.”

Of course, Sara didn’t have to do it all alone. She once again had help from NPPA and Mickey to help police her photos and their digital presence. “I got really, really good advice in two separate instances where I really needed it,” she said. “Being part of a professionals association like NPPA is a way photographers, especially freelancers, can help themselves.” Mickey helped her approach people, but he’s urging blogs and other publication to contact the artist and ask their permission (and, better yet, pay them if possible). As he explained, “People shouldn’t just assume. Assuming is always dangerous.” You should ask, and ask first because the answer you get might change whether or not the story will happen.

But what to do if your images go viral and are used without your permission? Contact the offending blogs and ask them to either pay you or remove the unlawful post. Most will comply as they often didn’t know or understand the law. The Internet being by definition without borders, blogs in other countries might be working under a completely different set of assumptions. Bringing a lawsuit is hard enough in America but close to impossible internationally (except if you have lots of time and money on your hands). Copyright infringement attorneys ask on average for a $10,000 retainer to start, so you need to make sure the damages you’re entitled to are greater than your lawyer’s fees. “It often doesn’t make sense for somebody to bring a copyright infringement suit. If the most you hope to recover is a few hundred dollars (and there’s no guarantee you will win), who’s going to lay out $10,000?” Hence the importance of belonging to professional associations which can offer free legal counsel and help you determine the best course of action.

The other thing you can do (and really should do) is to register your work with the US Copyright Office. It’s a bit of a tedious process, but it’s worthwhile to add it to your workflow. Regularly batch register before things are published. Make it a habit—this will offer greater protection if you need to sue someone for illegally using your work. As Mickey explained, “If your whole life you’ve only been paid $5 for a photo, if you have haven’t registered that work with the US copyright office, that’s all you’d be entitled to. Attorney’s fees and statuary damages are only applicable for copyrighted work… What you get is up to the court—but you cannot get anything at all if the images are not registered.“ Mickey acknowledged that too many photographers skip that important step. “Out of all of the content creators, photographers are the worst at registering their work,” he said. And news photographers are the worst out of them as they are always busy chasing a story.

While bloggers need at the very least to ask your permission, nothing will stop your photos to go viral if the Internet gods decide they should—but at least you have the right to call them up on it!