Getting High with Tom Ryaboi

Tom Ryaboi loves to get high. Now before you get your knickers in a twist, we’re talking altitude here, not intoxication. Skyscrapers, apartment complexes, construction cranes—if you build it, he will want to climb it. The multi-disciplinary photographer is known for his street and travel work, but it’s his mind-boggling rooftopping shots, staring gravity in the face as the image slides down the slick façade of an office complex, that caught Resource’s eye. Rooftopping (quite simply, the taking of photographs from roofs or other high points) has emerged as a growing trend in photography in recent years, and while Ryaboi doesn’t consider himself an adrenalin junkie like many other rooftoppers, he does relish every chance he gets to be on top of the world. 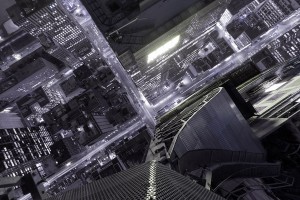 I started taking photos in my early twenties on a backpacking trip from Vancouver to Argentina (by land). I was capturing memories and experiences I had on my first real trip. When I got home, I found I could tap into that sweet state of mind I had whenever I picked up the camera.

I haven’t been able to put it down since. 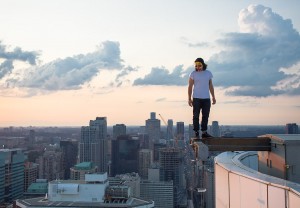 When did you start experimenting with rooftopping?

Before I can remember, my father likes to tell a story about my youth when he returned from work to find me on top of the fridge. I was only two then.

Fridge-topping: I guess that was where it all started. 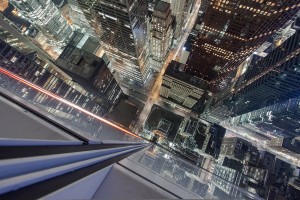 What makes rooftopping different from your usual work? Is it driven by the same ideas as your travel and street photography, or is it a departure?

Rooftopping is something I do whether I have a camera or not. Being in high places is just something I need to do to keep a balanced head.

From a technical standpoint, it’s a very different state of mind from my usual work. On the street I always need to be on my toes. A good street scene is only there for a moment; you need to be ready before it happens or it’s gone forever.

With rooftopping you can be patient and wait for things to come to you. You can let yourself sink into the scene and shoot when the time is right. 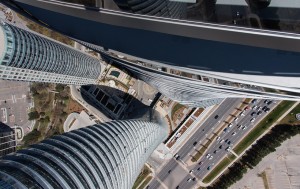 How do you choose the sites where you shoot? What do you look for?

A lot of trial and error, but generally the best roofs are the ones nestled among other tall buildings. The perspective and the scene are usually more important than the height.

Most of these shots were taken in Toronto; a couple are from Chicago. 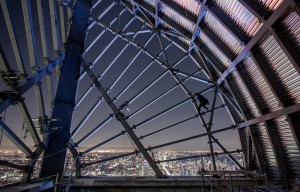 What kind of equipment do you use when creating these shots? Do you work alone or with an assistant or team?

I’m currently using a Canon 5D Mark III and a variety of lenses. I love the raw files it creates; they are very flexible in post.

I generally shoot with other photographers, but it really depends on what I’m shooting. 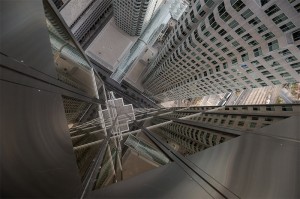 A lot of other rooftopping photographers have talked about run-ins with law enforcement or angry proprietors as they try to find sites where they can create mind-blowing shots (Russian photographer and rooftopper extraordinaire Vadim Mahora recently posted photos on his blog of himself and travel partner Vitaliy Raskalov in a Czech police station, in handcuffs after attempting to scale and photograph St. Vitus Cathedral in Prague). Have you had similar issues when shooting? Are people generally receptive to having you take pictures on their roofs, or are they more hesitant?

I used to have issues with location, but I’m pretty lucky to be invited to most of the roofs I want to shoot on today. 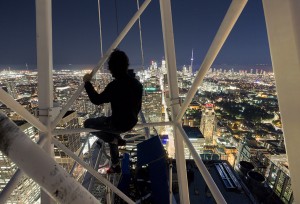 Ryaboi has also been experimenting with time-lapse photography, rooftop shots strung together to create a vivid portrait of a living, breathing city. Check it out here! 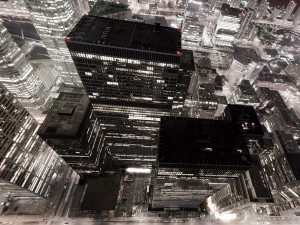 To see more of Tom Ryaboi’s work, go to http://www.tomryaboi.com/.