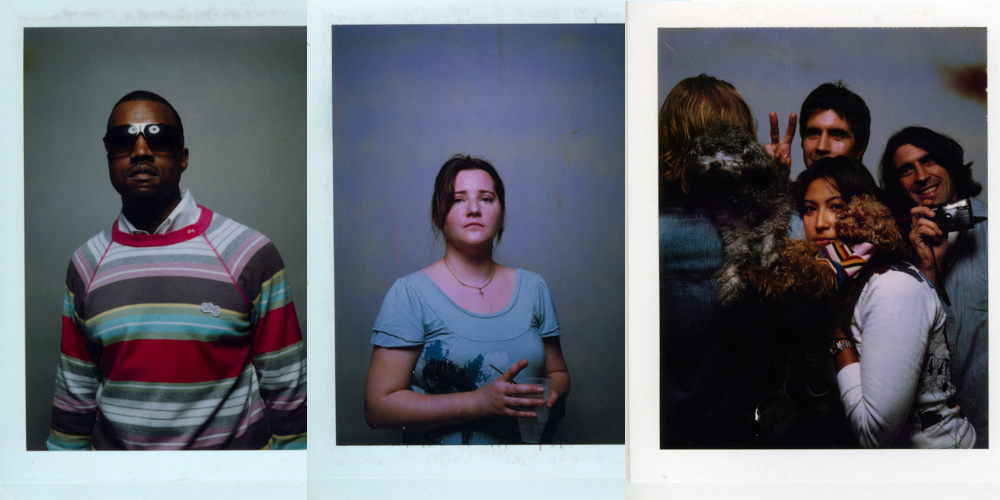 Although high-tech digital cameras have quickly defined the world of photography, the Polaroid will always be the ultimate product when it comes to instant gratification. New York City based photographer Michael Greenberg knows all about Polaroids, seeing as he’s shot around 2,500 of them. For his Polaroid project, Greenberg shoots a staggering five hundred Polaroids a day on his 4×5 camera. They’re shot over a four or five hour period in a party environment; he creates a growing art installation as the party progresses. Although his subjects are hesitant at first, it’s clear that as the night goes on everyone warms up, and before long there’s a line of people waiting behind Michael’s camera. For Greenberg, the allure of the Polaroid has to do with the fact that there are no negatives; each shot is valuable and one of a kind.

Did you have a Polaroid camera when you were younger? When did you shoot your first Polaroid?

I don’t remember exactly when I took my first Polaroid. I was a child of the 80’s so Polaroid was an institution by that time.  I can remember when I was really little, maybe 3 years old, I used to play with my parents’ plastic Polaroid land camera. I think it was a “Colorpack” model.  I just liked looking through the viewfinder and squeezing the button (shutter release) to make little lights light up in the window. I never put film in it, but I would carry it around everywhere and click the shutter to make the clicking sound for fun. I’m pretty sure I broke it.  (Sorry Mom and Dad.) 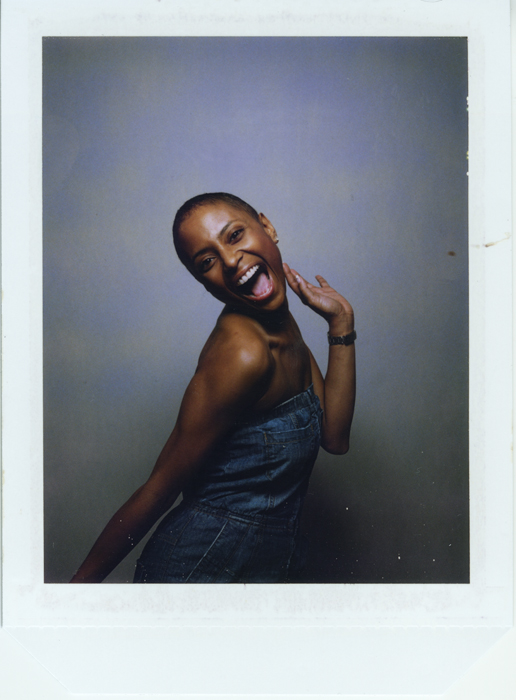 Why were you drawn to shooting Polaroids?

In college, I was primarily using medium and large format cameras, and before shooting, using Polaroid backs to test lighting was a necessity.  I would get really attached to the Polaroid shots I got from doing this; they were instant, which felt like magic.  A Polaroid can’t be reproduced, so it felt far more precious to me.  It’s the closest a photographer can come to having a piece of work that is limited to an edition of one.

After my shoots, I would use gaffers or double-sided tape to hang these Polaroids on the wall of my apartment. In no time at all, I created an entire wall of Polaroids, which became my favorite way to decorate. Unfortunately, when I’d take them down, the paint on the wall would be absolutely mutilated.  My buildings’ supers must have hated me. 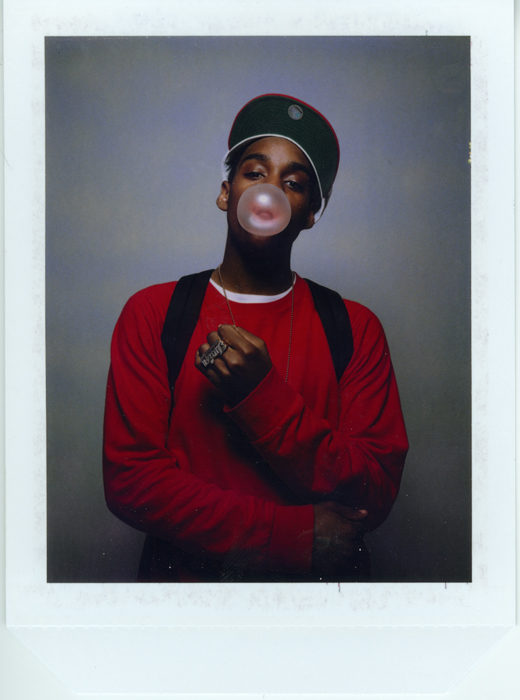 Do you still shoot Polaroids now that the company ceases to exist?

Honestly, I am still experiencing post-Polaroid depression now that I can’t get the real film anymore.  I believe that history will not look kindly on the discontinuation…but that’s a rant I’ll save for a different time. I still shoot “polaroids” which has become common vernacular for all instant film now. Earlier this year my friend Khalym Schell called me up to shoot an assignment for Steve Madden and I used Impossible Project instant film, which I ended up liking a lot. Every now and then I break out the real stuff on a special occasion, just to remind myself why I fell in love with Polaroid in the first place.

I would love to go back to shooting large format instant film in bulk again.  I have a lot of ideas of how I’d go about recreating the experience without having “Polaroid”, but I’m still waiting to find the right outlet and forum to do so. 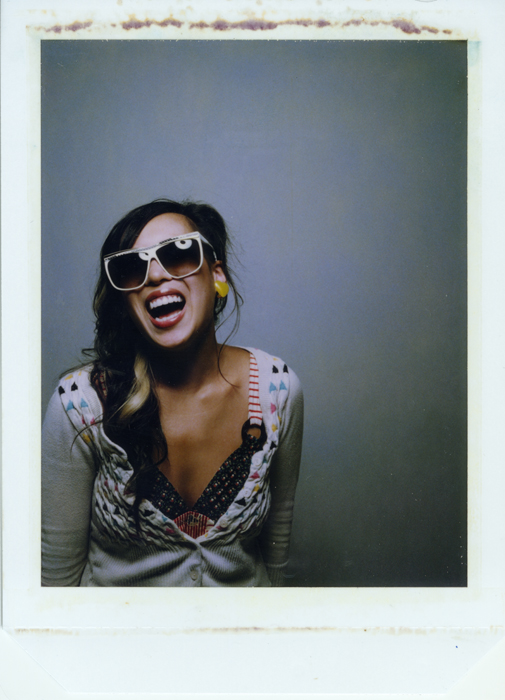 Did you stock up before the company stopped production?

Luckily, I had been in the habit of hoarding film long before they ceased production. Before the digital takeover, at any given moment my refrigerator was filled to the brim with Timezero, 669, Type 79 and Type 55 films, (and old takeout leftovers I hadn’t thrown out yet). Then Polaroid started discontinuing their films in early 2008, starting with the large format films.  Right before the 4×5 instant film was discontinued, my friend Ross at K&M put aside a case of type 79 and a few boxes of type 55 for me.  (To put that amount in perspective, I had been shooting over six cases of Polaroid a year over the previous four years.) 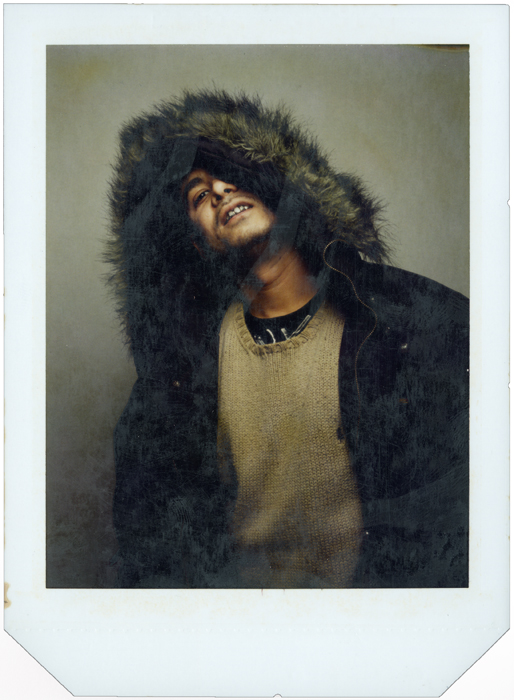 Can you talk me through your process for shooting 500 Polaroids in one day?

The process is pretty simple: The Polaroids are shot in a party environment over a four- to five-hour period.  I set up a 4×5 camera with a basic lighting setup, shoot a Polaroid of every person in the room, and then as the pictures finish processing, I have an assistant hang the Polaroids on a wall to create an art installation.

The sessions usually start out with me awkwardly approaching the first few people, asking “Can I take your Polaroid?”  I invariably get that look that can only be interpreted as “Get the f— away from me”, which is when I try to find someone I know to start the portrait series.  After the first twenty or so Polaroids are shot and hung up, people begin to grasp the concept and start gathering out of curiosity.  There’s a point within the first half-hour when the energy shifts, the crowd joins me, and the line forms. 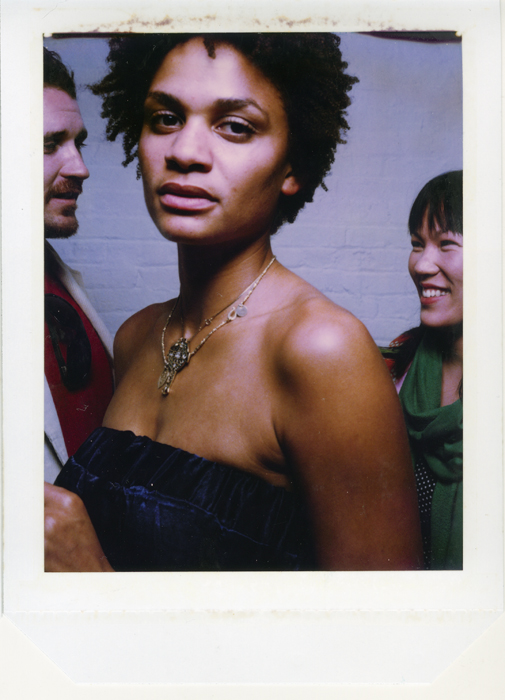 I bring each person in front of the lens and most ask me “what should I do?”  I usually reply with something quick like “trust me”, which sounds completely pretentious now, but in that situation it makes a lot of sense. I have 30 seconds at the most with each person. It’s pretty fast and furious.  There’s a lot of yelling, cheering, and people trying to outdo each other.

I don’t get to see what I have shot until it’s time to take the Polaroids down.  I am always reminded of the first time I shot the Polaroids in 2004. I shot the Polaroids as a part of LRG Clothing’s campaign photo shoot/party while I was Kareem Black’s first assistant.  It was a huge all day party with a DJ, food and a 6 hour open bar.  Kareem was shooting the campaign and he asked me to shoot Polaroids of everyone who came to the party.  At the end of the day Kareem pulled me away from the 4×5 camera, took me to the wall, and said “look at what you just did.”  I stood back and saw a huge grid of celebrities, models, tastemakers, friends, photographers, art directors, and future clients.  Kareem and LRG had me shoot Polaroid walls at all the campaign photoshoot parties for five or six seasons after that.

I enter every Polaroid and bulk portrait session the same way.  The objective remains the same:  Shoot everyone in the room.  Make them look like the star.  Approaching the first few people is always going to be awkward but once those are done the rest of the day/night becomes a blur until the end where I stand back and see everything I shot for the first time. 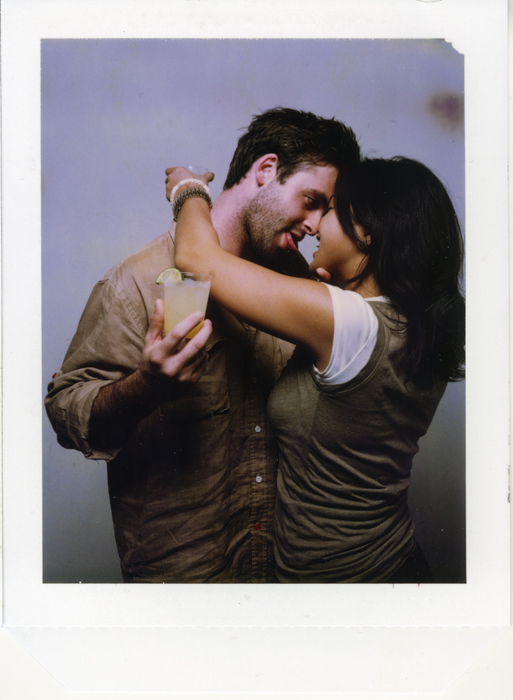 How has shooting 500 Polaroids in one day helped you to grow as a photographer?

So much of being a photographer is personality.  Shooting so many portraits in a day forced me to open up socially and to speed up my process.  It made me more comfortable talking and finding a bond with new people quickly.  I used to be really introverted.  I was a fat, nerdy kid growing up and all I wanted to do was play guitar and skateboard with my friends.  I dreaded talking to new people (not a good trait for a successful portrait photographer).  I was really lucky right out of college. In the early stages of my career, I had the opportunity to shoot a lot of editorial portraiture, fashion, and some advertising, but my approach was much more stiff and deliberate.  I’ve become conditioned to let go and trust myself more. That has really helped me with shooting editorial celebrity portraiture where often I have only 5 minutes with someone to get my shot. 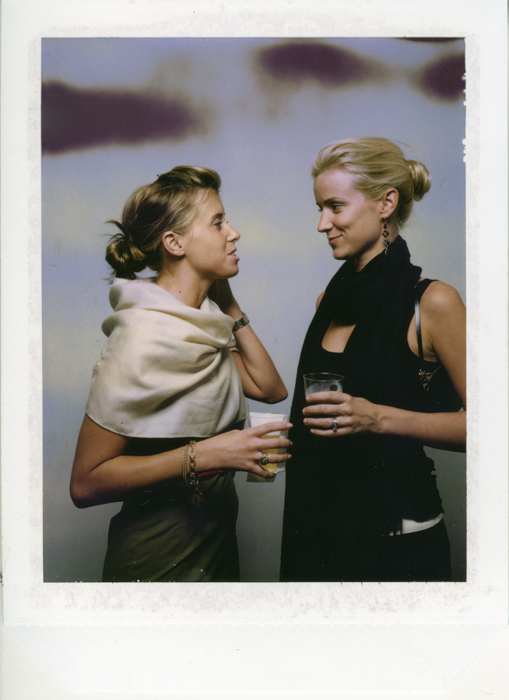 Do you let each of your subjects decide their own pose or do you pose each shot?

It really depends on the person.  A lot of people are not comfortable in front of a camera so they take a bit of direction.

I’ve noticed that some of the Polaroids are done as group shots, do you prefer shooting people one at a time or do you like the chemistry of group shots?

I love shooting both solo shots and group shots.  If a group has really good chemistry I’ll use that.  If I know I am going to get a really great portrait I’ll pull someone aside and make sure I get a solo shot.  I look around to see what is going on socially with the crowd.  Shooting the Polaroids is interesting because it serves as a social lubricant for the crowd.  People are looking at the photos on the wall and become a community.  People who don’t know each other now have a common bond.  I see guys using it as an opportunity to talk to women and vice-versa.  There’s a lot of “Hey do you want to get a Polaroid with me?” and I use that whenever possible. 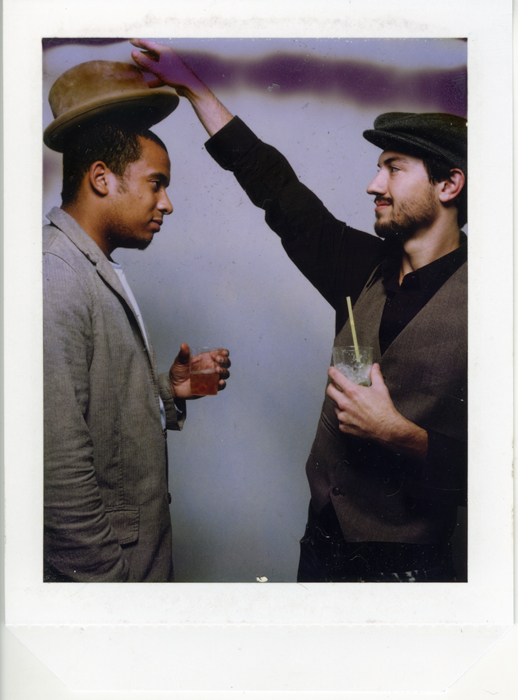 Some of the Polaroids have marks on them, was this done purposely to add visual interest or was it unintentional?

Both.  I experiment a lot with what happens while a Polaroid is developing.  Polaroid is imperfect and temperamental so sometimes the slightest pressure on it while it is developing will leave a mark. 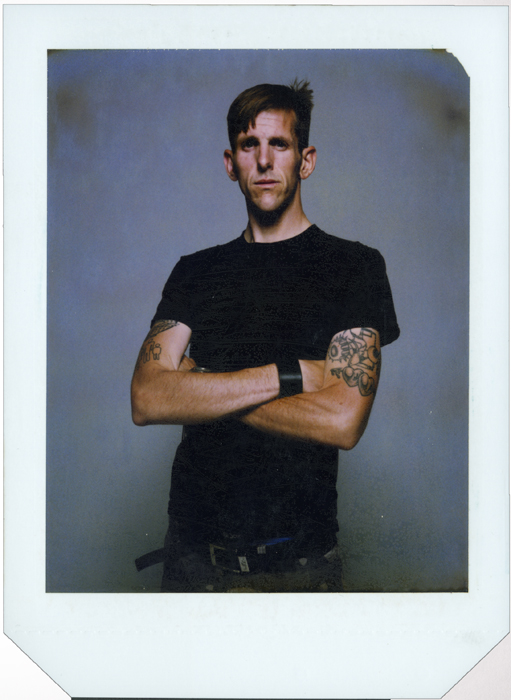 The overall response to my Polaroids has been really positive. Most often everyone is just really excited to see an interesting portrait of themselves. There’s usually someone who pays me what I can only interpret as the highest of complements by stealing a photo from the wall.  If catch them doing it, I am far less complementary.

The series has opened a lot of doors for me and has won me a lot of work.  It got me this interview.  Every once in a while someone will ask “… don’t you wish you had shot all this on film?”  I understand where they are coming from because you cannot look at a Polaroid without acknowledging that it is limited to that single piece of Polaroid film.  There’s no negative to print from, unless you are shooting types 55 or 665.  That makes the body of work much more valuable to me. 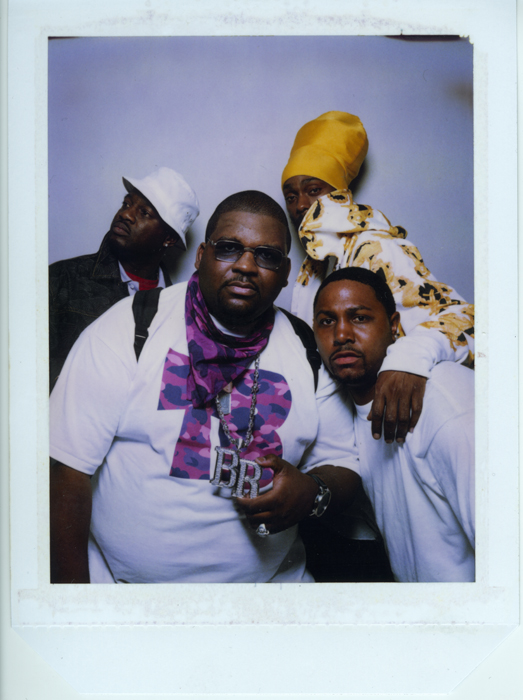