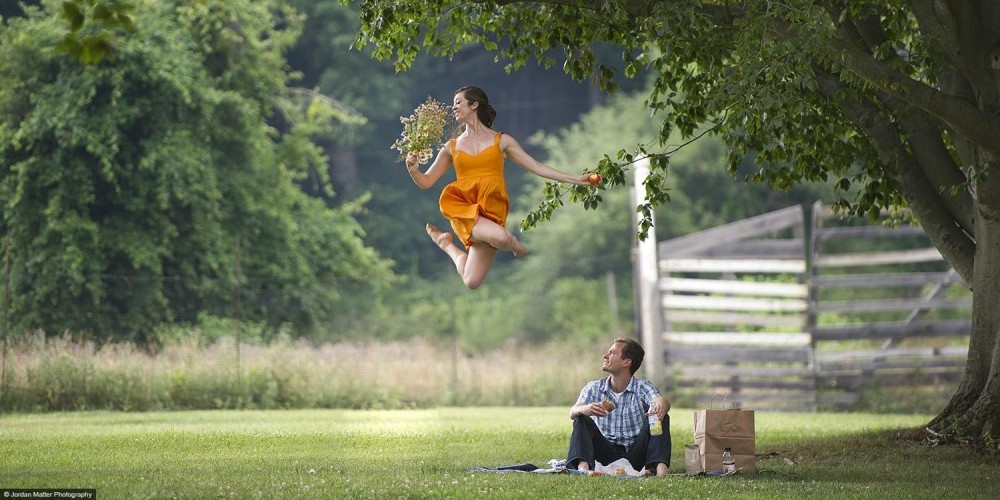 As photographers, dancers or artists, we’re faced with what seems like endless rejections. Sometimes it gets to the point where it becomes extremely discouraging to continue on with a passion in which you’ve committed so much of your life. Photographer Jordan Matter had witnessed the lights at the end of tunnel shut off plenty of times until one day they burned bright—his photography book “Dancers Among Us” got published and eventually made The New York Times bestseller’s list!

The photo book, contrary to what people may perceive after a first glance of the title and cover, is not about dancers. It’s about finding the beauty in the day-to-day regimens of our lives. These exquisite photos of dancers, used to tell stories of various situations—whether it be taking the trash out or running to catch the subway to work—strive to capture the exuberance of life that lies in every single detail of our daily routines, no matter how big or small. 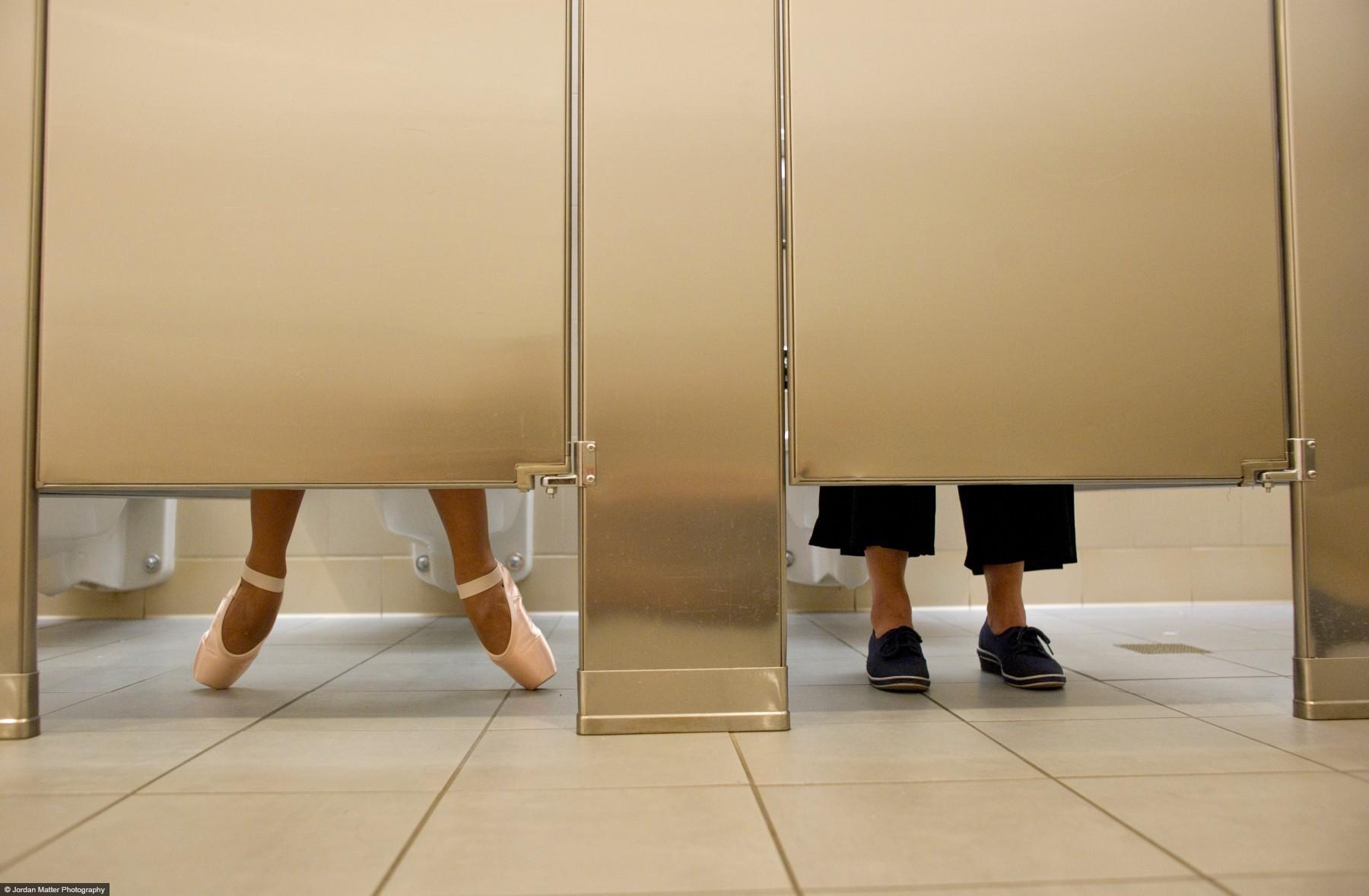 “I think that life is made up of a lot of individual moments, and the more moments we can celebrate the fuller our lives will be and the longer our lives will feel,” said Matter. “The idea of just going from one thing to the other and only looking toward the next thing and not really living the moment that you’re in really just leads to kind of like a whirlwind of experiences that you don’t remember and a life that feels too fast.”

Matter stumbled upon the inspiration for this book four years ago after observing his son’s imagination at work as he played with his toy bus. “His enthusiasm for his fantasy was inspiring because I realized as we grow into adulthood we lose that ability,” said Matter.

Over a span of three years, determined to see his vision come to life, Matter reached out to several dancers across the globe, who were willing to volunteer their time to be a part of his artistic endeavor. Each time he planned to travel to a new area he would tweet and Facebook where he was going and dancers would get in touch with him to have their photos taken. He spent an entire two years just shooting in New York City and then ventured to about fifteen additional locations. He’s still continuing the project, recently having taken photographs in Seoul, Korea, and Italy. Next month he’s traveling to Paris. 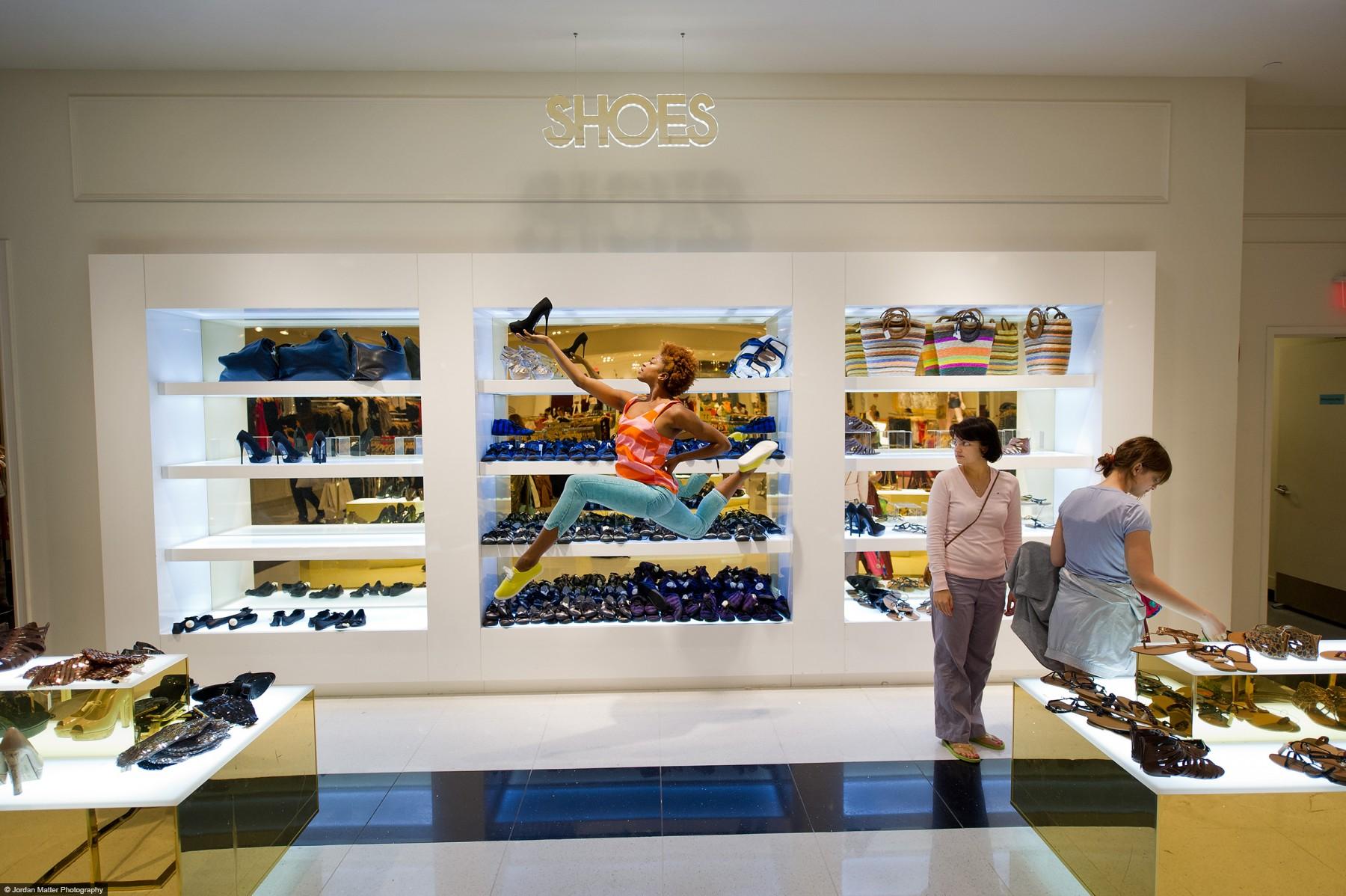 The majority of the dancers he photographed were professionals, usually specializing in either classical ballet or modern dance, although not all of them were. For Matter it wasn’t about how precise the dancer’s technique was, what style they trained in or how famous they were—his goal was to find dancers who could embody the euphoria for life he was looking to bring to these photos.

“I ended up using all kinds of dancers,” said Matter. “But this isn’t really a book about all the different types of dance out there. It’s about using dancers because of their athleticism to tell a story and to make the ordinary extraordinary.”

He specifically chose dancers because of their familiarity with sacrificing crucial things in their lives to pursue their passion. These photographs portray the theme of living life to its fullest, chasing your dreams and finding pleasure in everyday activities, no matter how commonplace they may be.

“It’s about celebrating ourselves,” said Matter. “If somebody takes a train to work everyday and they see the photograph of Jeffrey Smith running to catch the train in a split jump for Times Square, and they know that spot and they know that routine, then that photograph is going to speak to them.” 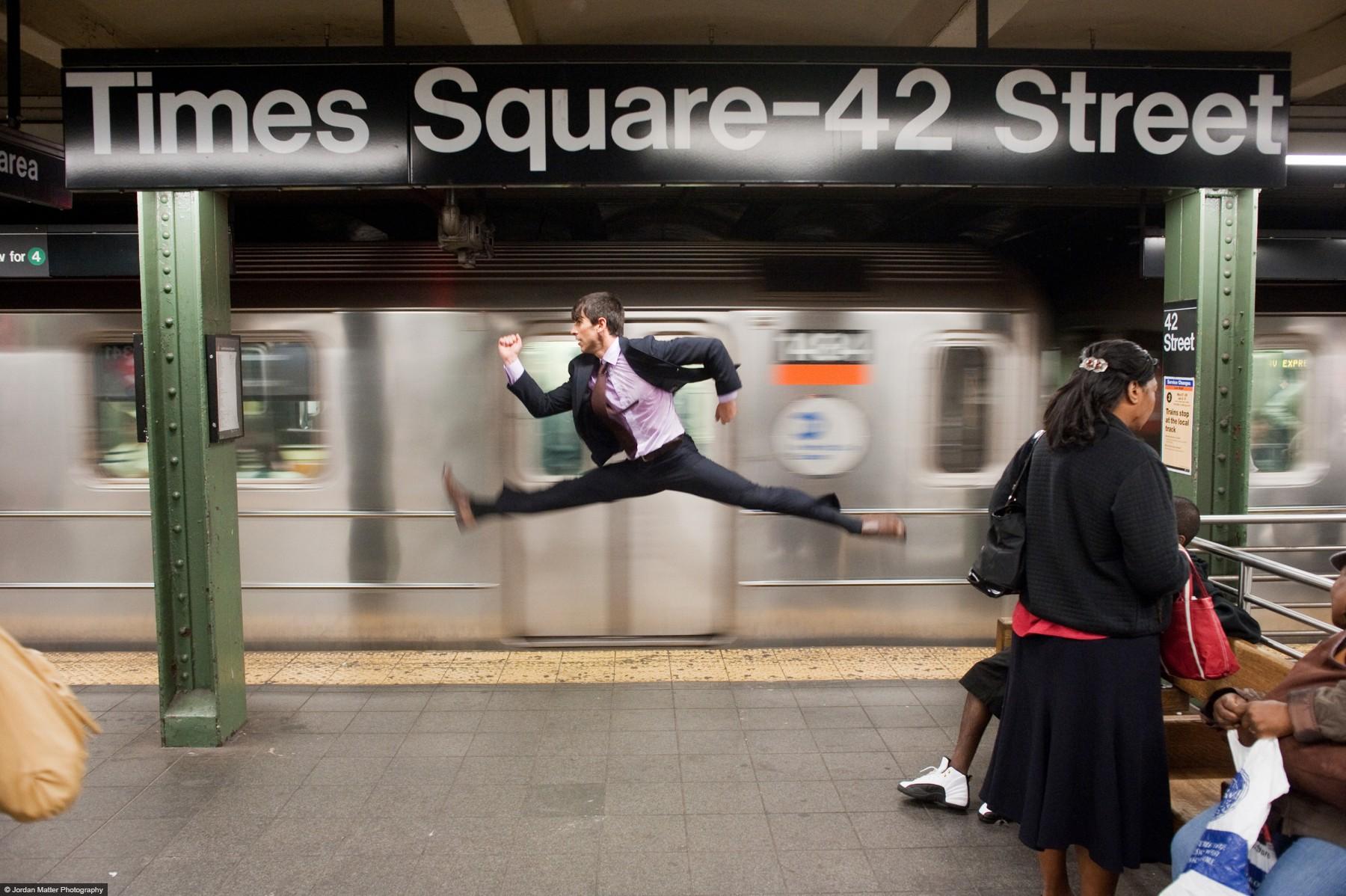 In determining the scenario of each shot, most of the time Matter does not have a plan. Once he arrives in an area with a dancer, they take a walk or drive around until they discover an appealing spot, and from there they figure out what the story will be.

“All the shots are very spontaneous,” said Matter. “I rely a lot on serendipity to guide me and I trust if I keep my eyes open I’m going to find a cool shot.”

Through the whole process of shooting “Dancers Among Us,” Matter says he was filled with constant joy and enthusiasm for life, which is what he wants and hopes for everyone who picks up his book. For him seeing these dancers reminds him to never get discouraged in achieving his goals, even if his ideas occasionally get shot down.

“Everybody said ‘no’ because they thought it was about dance and New York City and nobody cared and nobody was going to buy it,” said Matter. “When it made the bestseller’s list it was kind of a vindication for all those people who had doubted the possibilities of it.” 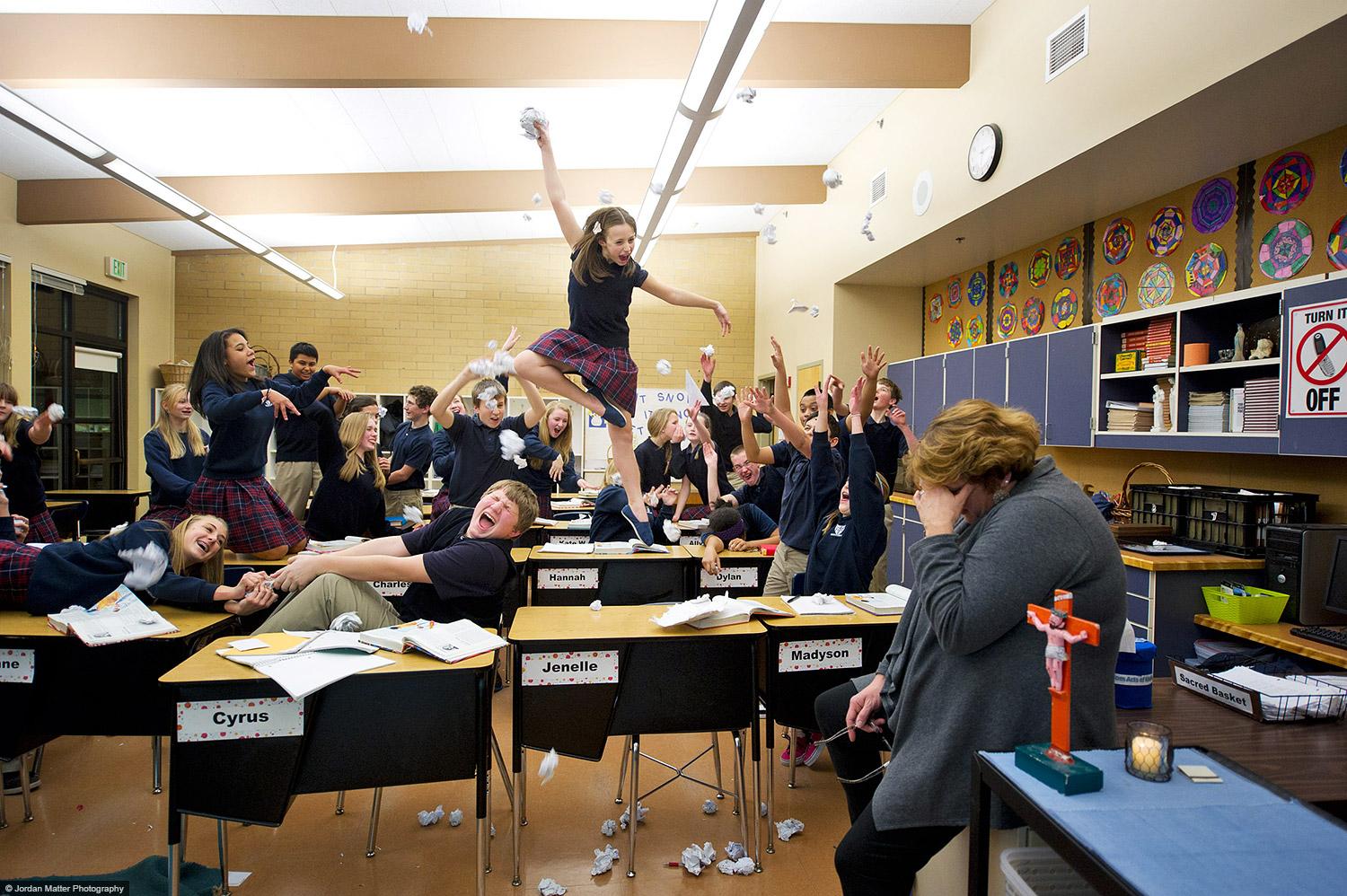 Several times while he was shooting the series, he went through moments of despair when publishers turned him down. He thought he would never be able to reach a wide range of people and spread his uplifting message. However, in the end a publisher came along in the final hour. “That’s why I’ve worked so hard in promoting it and continuing to shoot it—I wanted to get its full life because it was dead so many times.”

Matter’s current project is “Athletes Among Us,” which serves as a follow-up to “Dancers Among Us.” He got the idea to do the series after snapping photos of a NFL linebacker who said, “If you ever do athletes among us, I’ll do it.” So far he’s received a slew of responses from athletes interested and plans to start working on those now.

Photography was not at first what Matter pursued in life: he played baseball for the first two decades of his life; in college he pursued acting and then in 2000 he was bitten by the photography bug. “I had biked up to the top of a mountain with my wife and I was standing there, trying to figure out what sort of photograph to take with my Instamatic camera, but I didn’t know how to use it, so I decided I’d take a photography course,” said Matter. By becoming a photographer, he continues a family tradition: his grandfather, Herbert Matter, had commissioned projects for President Kennedy, Vogue, National Geographic and Harper’s Bazaar. His father, Alex Matter, being a film director and his mother, Paula Feiten, a Ford model, meant that young Matter was always around cameras.

While photography is now his career, it does not hold precedence over his family, the most important facet of his life. They constantly inspire him when it comes to his work and in life. “The entirety of the reason I did ‘Dancers Among Us’ is because of my son, so there would be no project without him. They always inspire me because of their joy for life. It’s addictive.” 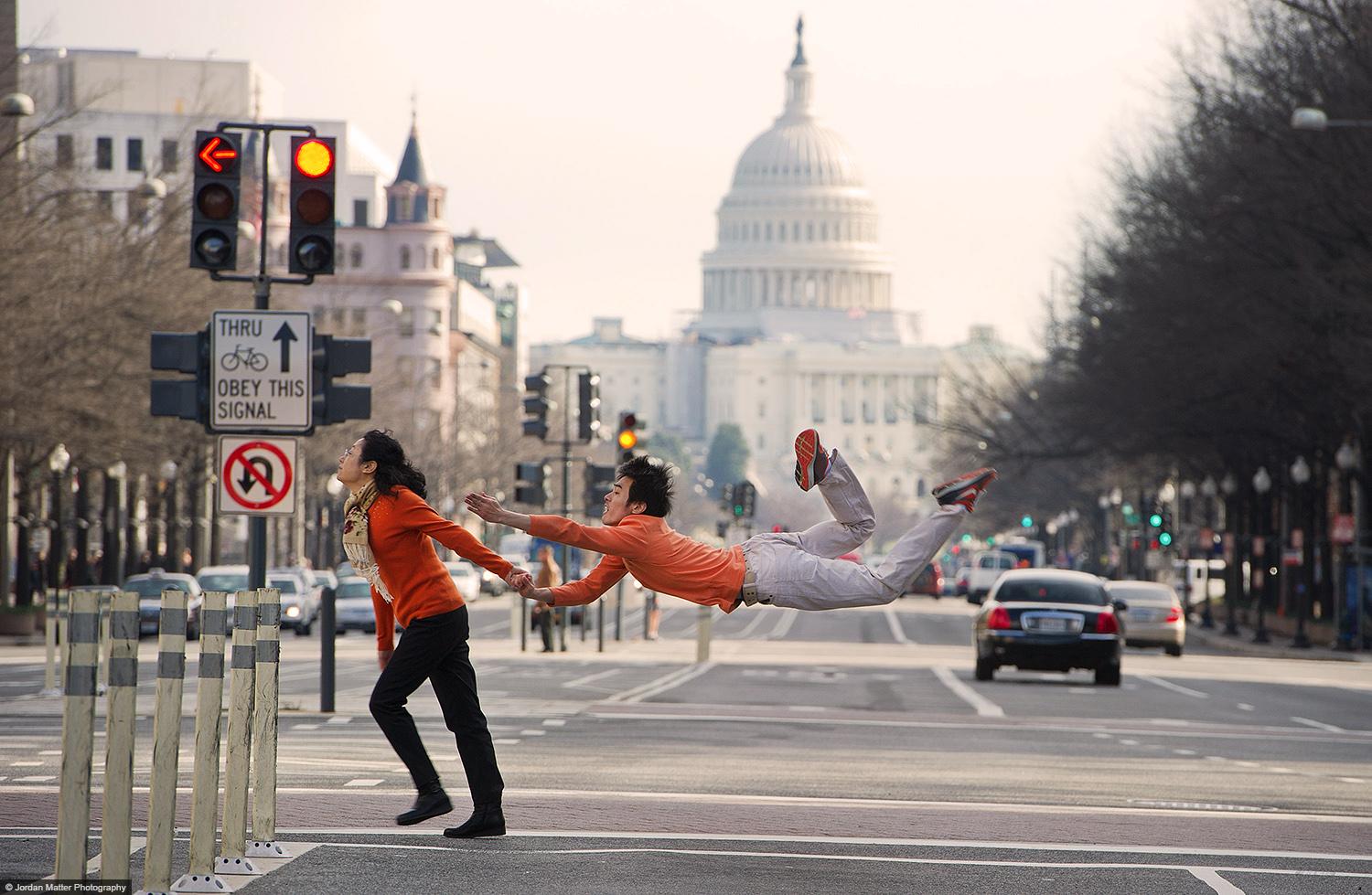