According to the guys at Pixelstick, humans have been playing with light and photographing it for a little over one hundred years. With the exception of a few genius examples, most people were restricted to using one light source. Pixelstick is out to revolutionize that process and make it so easy for the first time.

Here’s how it works: Pixelstick is a lighting rig constructed with 198 full color LEDs using eight AA batteries. Images are uploaded to Photoshop and synched to the device’s controller via SD cards. You already know the mechanics of light photography. It’s difficult to master, but a long exposure time allows for the continuous capture of light movement across the frame. With Pixelstick, you can walk in a straight line and create warp free images or abstract pieces by twirling and turning the Pixelstick around with its rotating foam grip handle . You are really only limited by your imagination when it comes to the possibilities this device. Not to mention, its matte black, so Pixelstick is completely invisible in the photos.

If you were questioning Pixelstick as a serious piece of hardware, I’m happy to tell you that this thing is no toy. The handbox is capable of changing brightness, tint, firing speed, and even contains a port for a remote camera triggers. Users can also manipulate things like vertical flip and left/right direction. Born out of circuit boards and trial and error, the Pixelstick is just waiting to be explored. 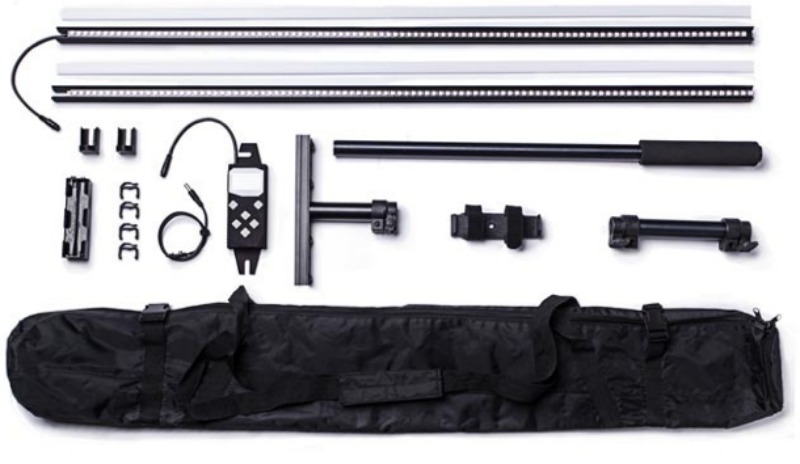 You can help make it happen too! This project is a kickstarter campaign that is still open for pledges ($1 minimum) all the way until December 13th. Bitbanger Labs have already doubled their 110,000 goal, making this project yet another Kickstarter smash hit for them. You can contribute to the Pixelstick cause here.