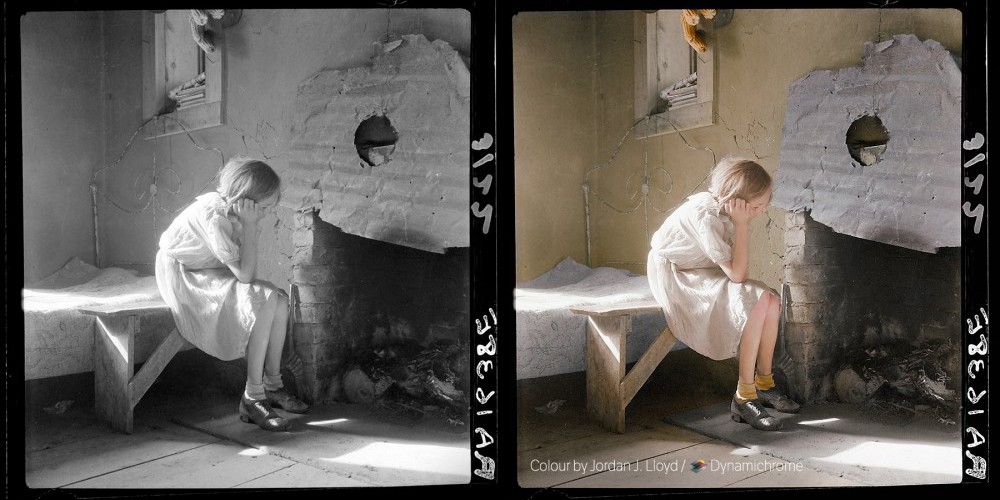 Dynamichrome: Bringing Color to the Past

Emily GriffinDecember 20, 2013
Jordan Lloyd, an image specialist at Dynamichrome, breathes life into black and white photos, bringing color to the past and making these moments seem as if they happened yesterday. Dynamichrome restores black and white images with the goal of trying to bridge “the gap between what we see and what the original photographer would have been looking at through the viewfinder of their camera.” Although the process is tedious, the outcome is amazing. Jordan Lloyd took some time out of his busy schedule to talk with Resource about the colourisation process, telling us how he creates magic from images of the past.
Feature Image: “Yellow Girl”
Colourisation from a black and white negative nitrate, courtesy of the Library of Congress
December 1935, New Mexico, USA by Dorothea Lange
How did Dynamichrome come about?
Dynamichrome is part business, part personal lifestyle experiment. A few things happened and the opportunity arose, so I took it and now I’m seeing where it leads. 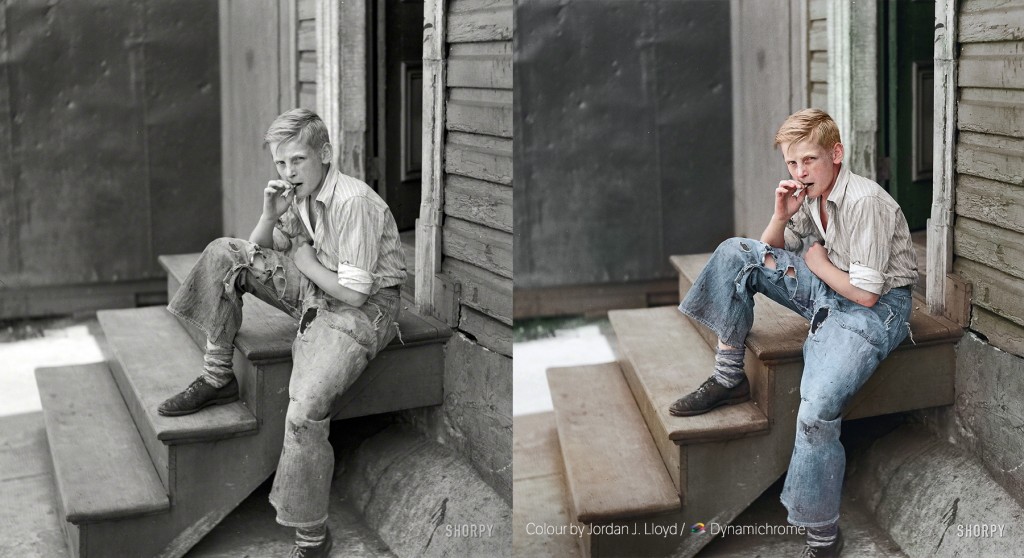 “The Smoking Kid”
Colourisation from a black and white photo, courtesy of Shorpy.com
July 1938, Baltimore USA by John Vachon
My background is in architecture, and before Dynamichrome I was half way through a PhD in architecture which is currently on hold. My research was looking at what architects were doing if they didn’t actually enter the profession and the kind of projects, strategies and skills they employ on the edge, or outside architecture. The thing about architectural education is that it is very comprehensive, and specialisms are really self driven when you can find time to delve into it. At the time, I was doing some teaching work which ended due to budget cuts, and I decided instead of teaching architecture, I would take all of that energy and put it into getting much better at programmes I was strong at – I picked Adobe Photoshop. Around the same time, I was looking at some of the stuff by Sanna Dullaway and other colourisers on Reddit, when my stepfather asked me to repair a family photo that had been badly sun bleached and it turned out the only way to fix it was through colourisation. So I got into it, and was fortunate to make the front page of Reddit, and my friends and family started taking notice. I was also reading Cal Newport’s ‘So Good They Can’t Ignore You’ and that was a huge inspiration to follow the opportunity as it presented itself. His general thrust is that following your passion is bad advice and to instead cultivate a passion by becoming very good at something that can generate career capital with a craftsman’s mindset. I agree with the approach and just decided to be very good at one thing, contrary to my architectural training. It’s a good situation to be in because I’ve seen how successful being good at one thing can be used to generate career capital – the reputation and revenue I generate is partly being used to fund some other design projects I’d never get the green light for. 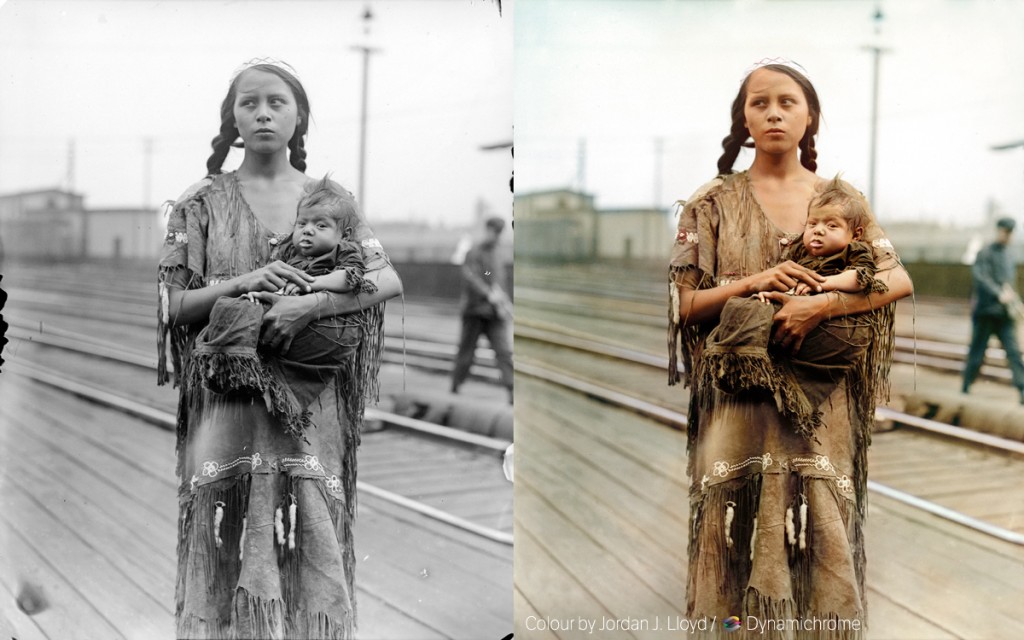 “Native American Mother & Child”
Colourisation from a black and white photo
c. 1930, America by Leslie Jones, owned by the Boston Public Library
What does the colourisation process entail?
Well it’s not really about getting the crayons out like some people believe. To do it seriously requires a lot of research, which is where I’m very pleased my previous training in architecture kicks in. The process itself is quite straightforward: colourisation is essentially adding colour digitally, like painting, to a monochrome plate. The illusion of realism is dependent on how many layers you choose to put in, and your awareness of colour physics, so you can perceive how light affects colour. Before that comes all the research which needs to be absolutely meticulous, and then in about 90% of cases some form of restoration is involved: blemish removal, scratch removal, reconstruction, tonal corrections and so forth all need to be considered. Once the colour is added, then depending on the colouriser, some form of post processing happens. I have a process that uses Lab colour space, Camera RAW and a couple of other little bits. 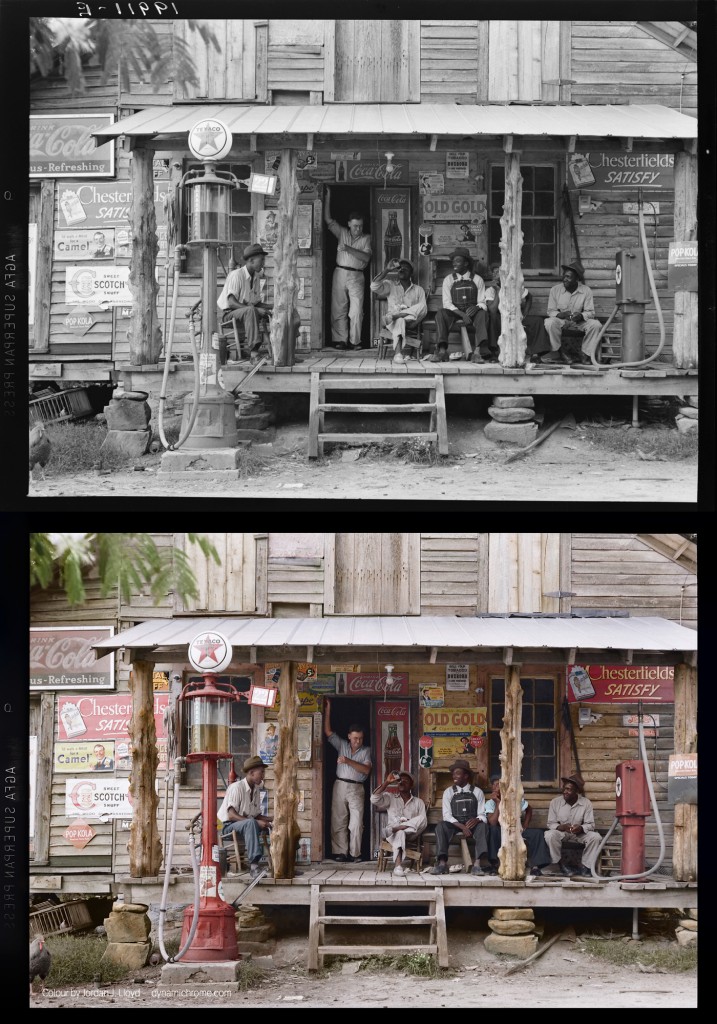 “Old Gold”
Colourisation from a black and white nitrate negative, courtesy of the Library of Congress
July 1939, Gordonton, North Carolina, USA by Dorothea Lange
Why do you think colorizing an image makes it seem more real to people?
Quite simply, it’s because we perceive the world in colour – even people with colour blindness see the world in black and white. The perception of reality is highly visual, which of course is determined by colour. I can see the appeal, as for many people seeing black and white images in colour makes it more visceral and relatable. The thing to note is that a colourisation is an interpretation of the original black and white image, not a substitute for it. 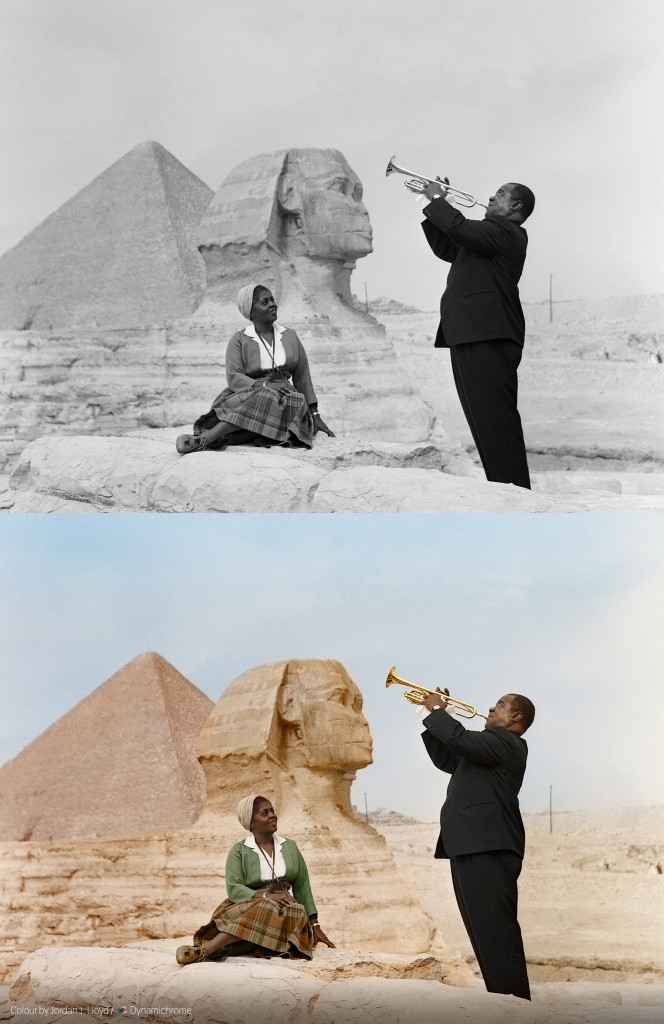 “The Sphinx”
Colourisation from a black and white photograph
January 28th 1961, Cairo, Egypt, photographer unknown, AP Press
Is it generally hard to research the images you colorize? What do you do if you can’t figure out what color something was?
This is highly dependent on the image. That being said, I am absolutely methodical in my research – it’s a case of following the rabbit hole and see where it takes you. I go the extra step every time and I will email specialists in every conceivable field in order to get an accurate colour reference. Case in point, I emailed a specialist museum on the Three Stooges to obtain a particular costume from a particular episode. Garment historians, soda retailers, gas station sign enthusiasts, civil war historians, auction sites – all of these represent the kind of organisations I’ll get in contact with. Research has one major function in the craft of colourisation which is to eliminate the guesswork. Sometimes however this isn’t possible, so I switch to greyscale tones and how they are relative to each other based on some known colour references; for example, an American flag. I then combine this with something that was of the same era, so it’s authentic, but I’d never guarantee 100% accuracy. 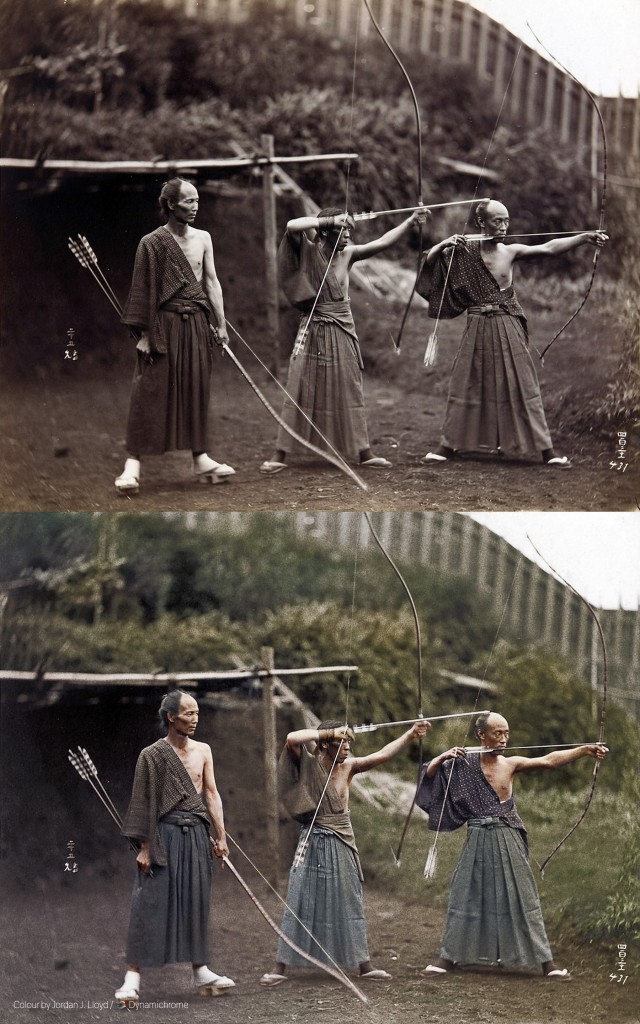 “Japanese Archers c.1860”
Colourisation from a black and white photo
c.1860-1900, Japan, photographer unknown
Are some images harder to colorize than others? For example I’d imagine the image of Martin Luther King Jr. standing in front of a huge crowd would be more difficult than the image of one man in overalls.
Patience is a colourisers biggest virtue. The visual complexity of an image adds to the time, but not necessarily the cognitive strain, though it’s tricky to make all the elements to work together convincingly. Crowd shots outdoors are indeed very difficult to do correctly. The March on Washington took… a while. Any indoor shot with lots of branding (like a general store for example) is *very* difficult to do well. 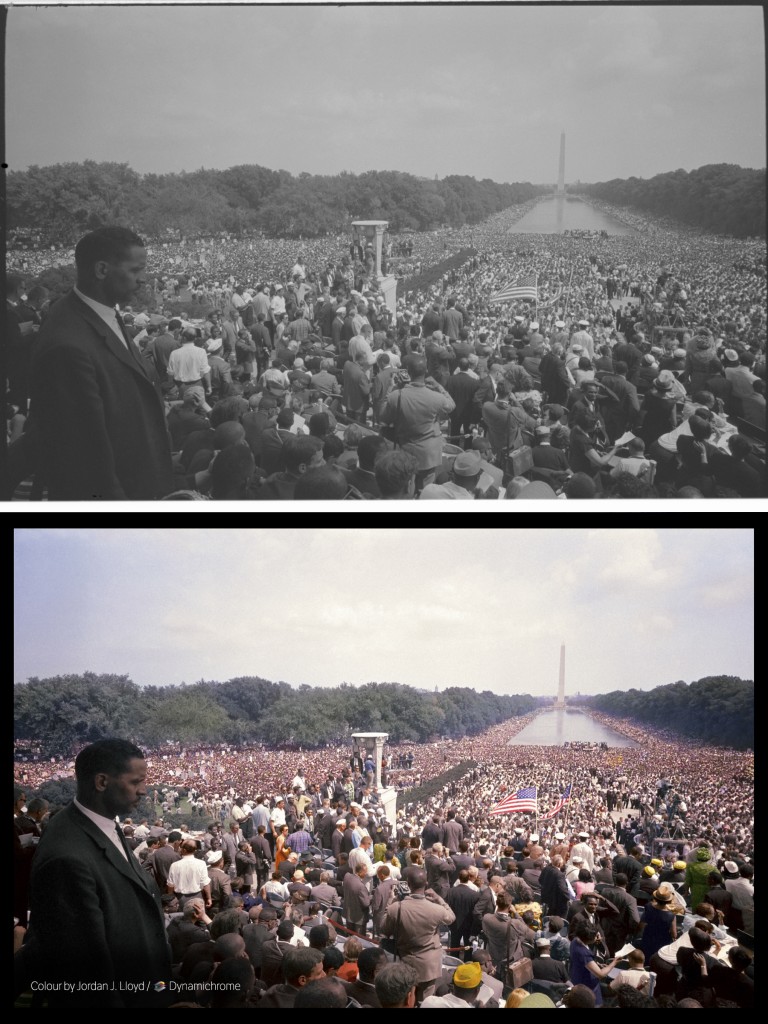 “The March on Washington”
Colourisation from a black and white 35mm Film Negative, courtesy of the Library of Congress
August 28th 1963, Washington D.C USA by Warren K. Leffler
What’s in the future for Dynamichrome?
There’s a few avenues worth exploring. My background with architectural visualisation is a complimentary fit and that work is picking up. Where I think it will get interesting is when the two can come together, like in serious reconstructions of images. We’re looking into getting into historical architectural visualisations for things like castles or other ruined or unbuilt projects. We’d like to do more work with museums, collections and press archives too, where I think Dynamichrome’s work would be of most benefit. 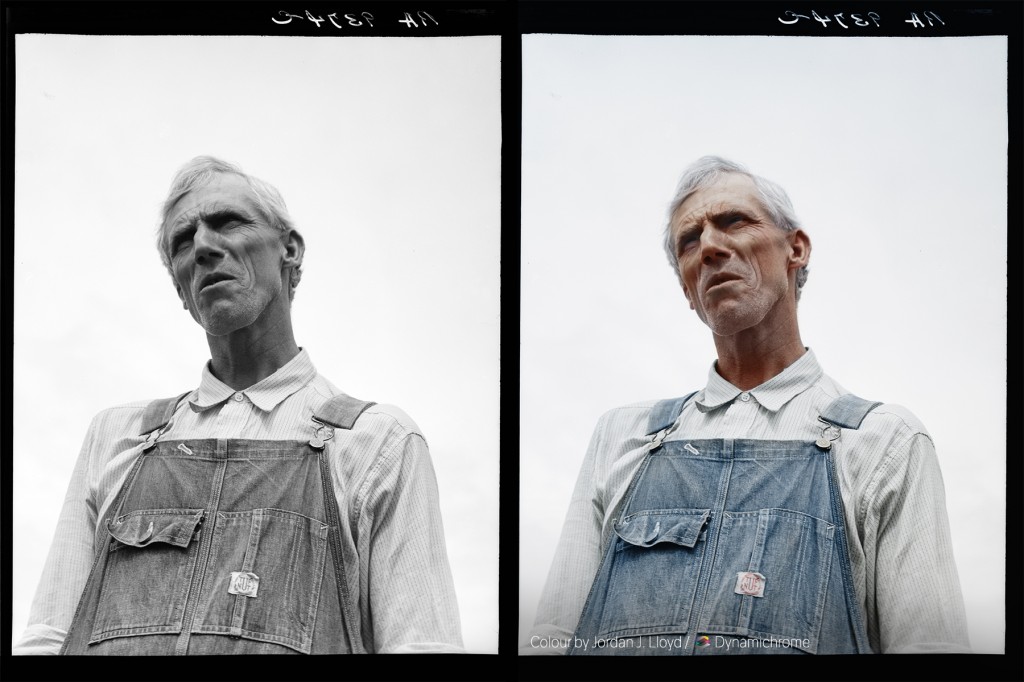