Jeff Friesen is leading a double life. For three quarters of the year, he is an award-winning fine art photographer, capturing stunning shots, often in the great outdoors of his native Canada, that have garnered worldwide acclaim and numerous awards. On summer afternoons, however, Jeff becomes “Ernie,” whimsical creator of humorous dioramas and Legoist extraordinaire.

The now viral 50 States of Lego started as a pet project for Friesen and his daughter, who would spend long afternoons building scenes with her Legos and other toys and then shooting them in a mini studio. The photographer dove head first into the project, first with a series satirizing the provinces of Canada and then with these United States, caricatured in little plastic blocks. The resulting vignettes are whimsical and smart, wittily captioned and rich in vibrant color and detail. Friesen talks to Resource this week about how it all started, and what a world-renowned photographer has to learn from a toddler. 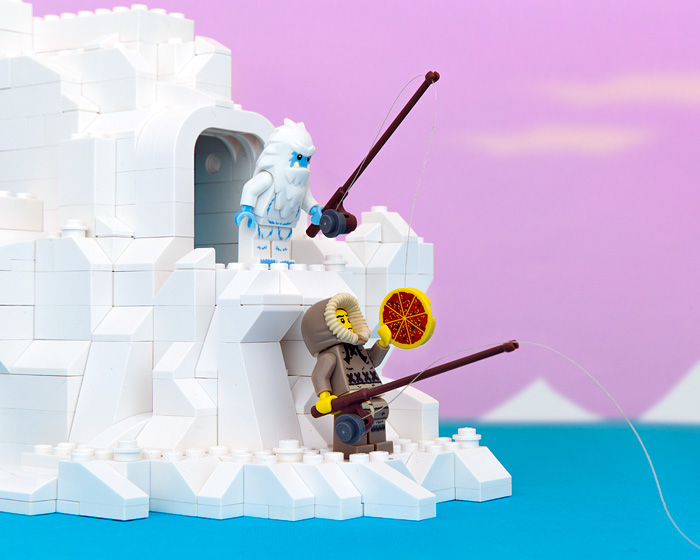 ALASKA
Give a man a fish and you feed him for a day. Fish for a man and he is food for a week. -From Abominable Quotes by Shaggy Bonespitter

How did this project start? Which came first, the Legos or the mini photo studio?

Every summer I look after my daughter in the afternoon. To keep us amused I set up a little tabletop studio (of the white tent variety) that we use to take pictures of her toys. This past summer she was into Lego so we made Lego dioramas. I started making Lego scenes of all the Canadian provinces as a joke for my friends. Because there are only ten provinces the fun ran out too soon, so I pondered whether it would be possible to make Lego scenes for all fifty States. It seemed almost impossible given the limits of my daughter’s Lego collection. 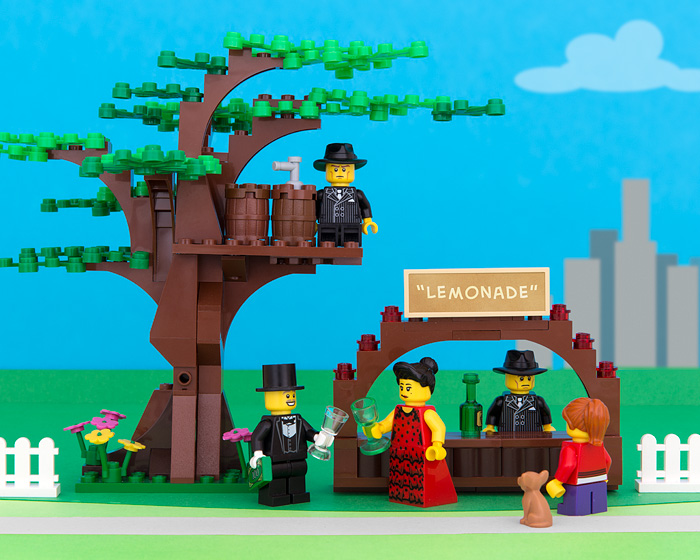 ILLINOIS
Bugsy’s mom is thrilled that he’s running his own lemonade stand this summer. He’s so busy he hasn’t rubbed out any of his associates since June.

How does your daughter inspire you?

Unlike many adult Lego builders, my daughter works with Lego free from dogma. She has even used a rubber band to hold pieces together. It inspires me not to get too rigid in my ways. 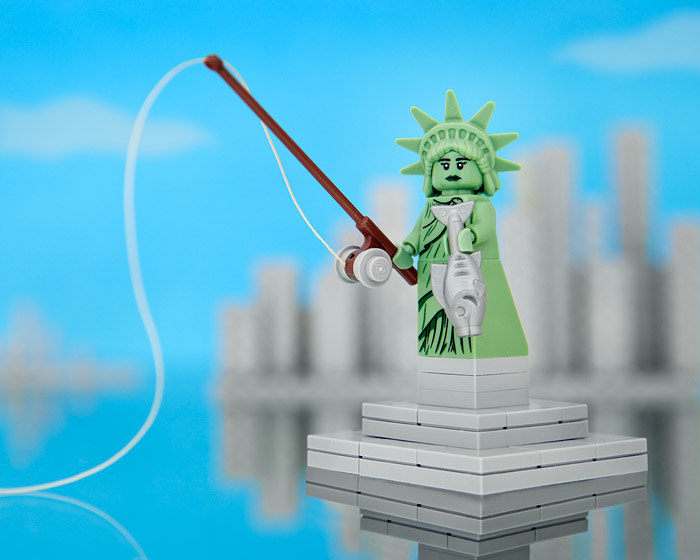 NEW YORK
Give me your tired, your poor, your creamy masses of tartar sauce.

As a Canadian, how much of this project came from knowledge you already had, and how much had to be researched?

I lived in the US for two years, and over the last twenty years I’ve visited most of the states. For states I’ve never been to I did research using Google. 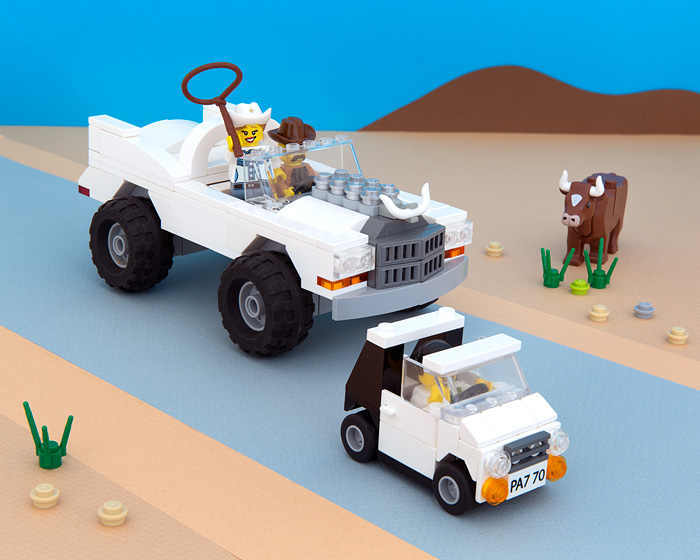 TEXAS
Rounding up little doggies who have lost their way.

How many of the states represented here have you been to? What do you think the residents would think of their Lego likenesses?

I’ve been to thirty-six states. Residents of states are overwhelmingly happy about their Lego likeness. It gives people a laugh, and that is the work’s goal. There are some people who think I didn’t capture every important aspect of their state, but that is of course impossible to do in one picture, Lego or not. NEW MEXICO
People tend to shy away from probing questions in the land of enchantment.

Do you have a favorite diorama? What do you think makes for a good Lego vignette, as it were?

I don’t have a favorite; in fact, they are designed to look nice as a complete set. Consistency is important to all of my work. Humor is an important element to Lego vignettes, and the ability to get a story across in one scene. 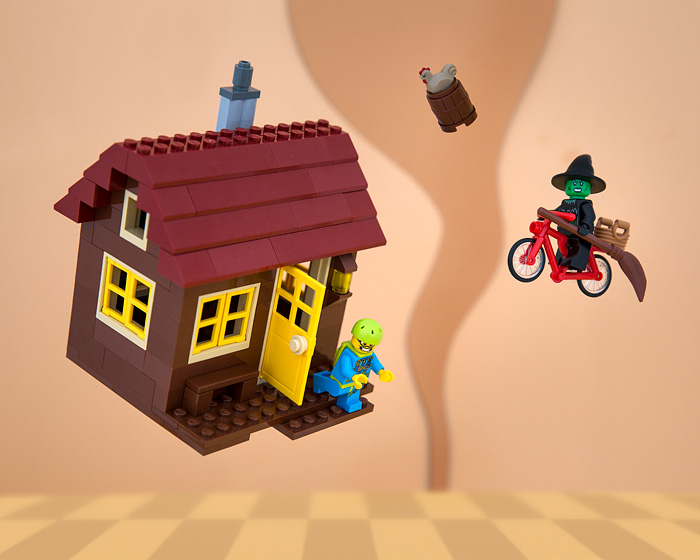 KANSAS
There’s no place like home, but if your home is frequently blown aloft it helps to wear a parachute indoors.

The only major Photoshop work is removing the strings that hold up flying objects, such as those in the Kansas scene. Other than that Photoshop is just used for standard image adjustments such as contrast and color balance. This project is a pretty big departure from your usual work. What does the Lego work allow you to do that your fine art photography does not?

The Lego work lets me have a laugh, which is a big part of my life even though most of my photography is serious in nature. In some ways it is the antidote for my other work. TENNESSEE
One can’t help falling in love with a quadruple layer club sandwich.

Is there anything (techniques, approach to a shoot, etc.) from your fine art work that translates to the Lego shoots, or are they completely separate?

The work ethic is the same for the Lego as it is for anything else I’m working on. 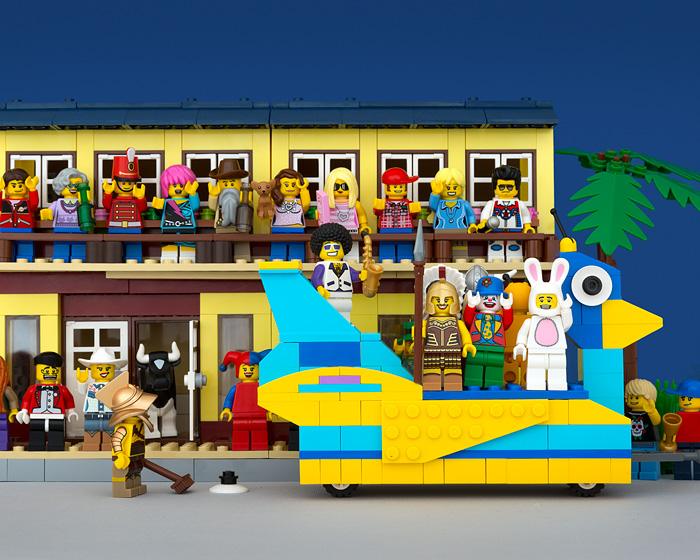 LOUISIANA
A Mardi Gras float is only as good as its clean-up crew.

So far, you’ve done the Lego Provinces of Canada and the Lego States of America. What’s next?

The next project is Lego World, and, though I’ve been trying not to go there, some fresh ideas involving Lego Star Wars have recently come to mind.