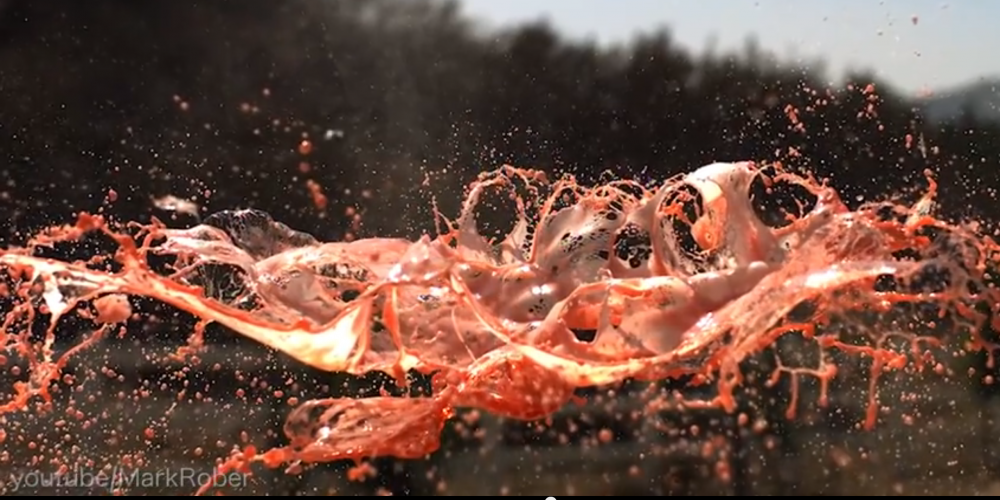 Freeze Time with Only One Camera

Former NASA engineer Mark Rober has eighteen million views on his Youtube videos. In his most recent video, posted only five days ago, Robles shows his viewers how he was able to freeze time with only one camera.  He calls it the “matrix effect,” and makes it happen with a rig, and help from his friend Destin from the youtube channel Smart Every Day, and his friend Ken, an engineer for NASA.

Believe it or not, his idea started with a GoPro camera and a ceiling fan. He attached his GoPro camera to a spinning ceiling fan, and was able to create a low quality “matrix effect.” The problem with the GoPro-ceiling fan rig was that the GoPro only shoots 240 frames per second, which isn’t enough to capture the image properly. Next, Aimed Research let him borrow their Phantom high speed camera that shoots a whopping 20,000 frames per second – quite a jump from 240 frames per second. Mark and the guys quickly realized there was a problem with the Phantom camera –  it was much too heavy and much too expensive to spin around.

This is where their rig comes in.  Ken, with the help of Mark and Destin, created a rig where the camera was covered in a protective enclosure below a spinning armeture that had two mirrors on it.  The light from the object that they were interested in filming bounced off of both mirrors and into the camera, which  spun at 200 RPM.  The camera was perfectly safe below the spinning rig, and was able to capture stunning, high speed footage like a water balloon breaking or glass shattering. Destin from Smart Every Day shows how the rig was built in his video, Bullet Time Fail. His video focuses on all of the failures they went through as they tried to create their rig. Destin talks about how all of those failures were important because they helped them to create a better machine.

To check out the awe-inspiring footage collected by Mark, Destin, and Ken, check out Mark’s Youtube video, here: