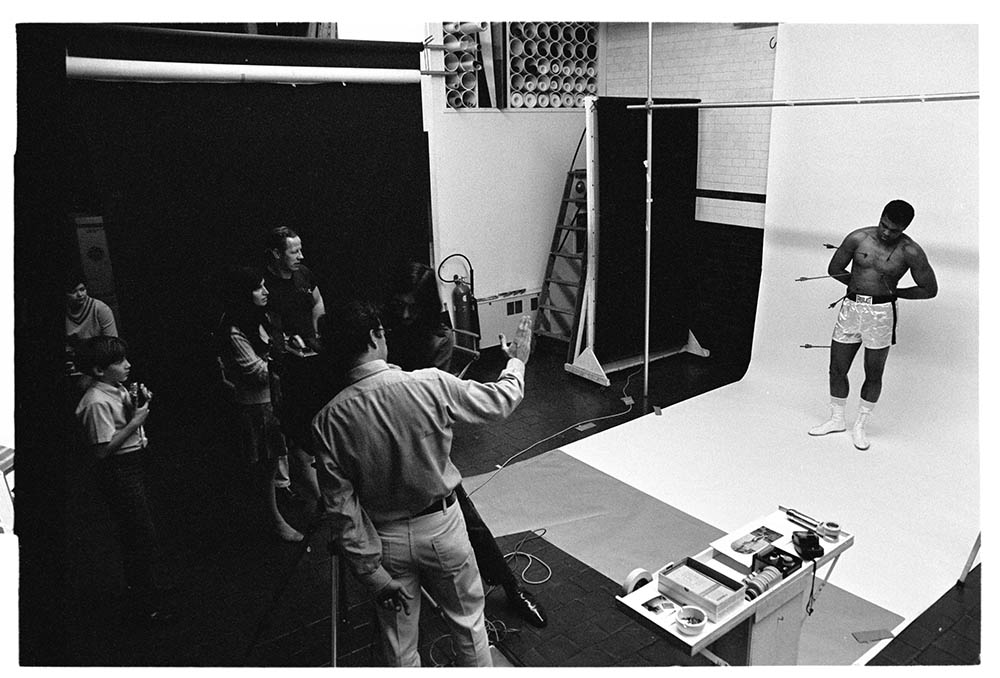 Thirty-seven years after Carl Fischer photographed (and George Lois art directed) Muhammad Ali posing as Saint Sebastian for the cover of Esquire magazine, Radar spoofed the infamous image by having a Photoshopped Tom Cruise bearing digitally inserted arrows. It was supposed to be a throwback to the days when magazine covers—and their thought-provoking features—caused uproars, public discourse and even cultural shifts.

Long gone are those days. Magazine covers now vie for your attention with oversized fonts describing the 616 summer tips for younger-looking skin, or how Transformers’ star Megan Fox is really pretty to look at, or the importance of knowing the recently-idle Idol alum’s sexuality, or even how the Disney Channel heartthrobs of today will someday rule the world.

But in 1968 things were very, very different. Magazine covers (the best of them, anyway) bore little-to-no verbiage at all and relied solely on the power of their visuals to stop newsstand passers-by dead in their tracks and solicit a very audible, “Oh my God!” 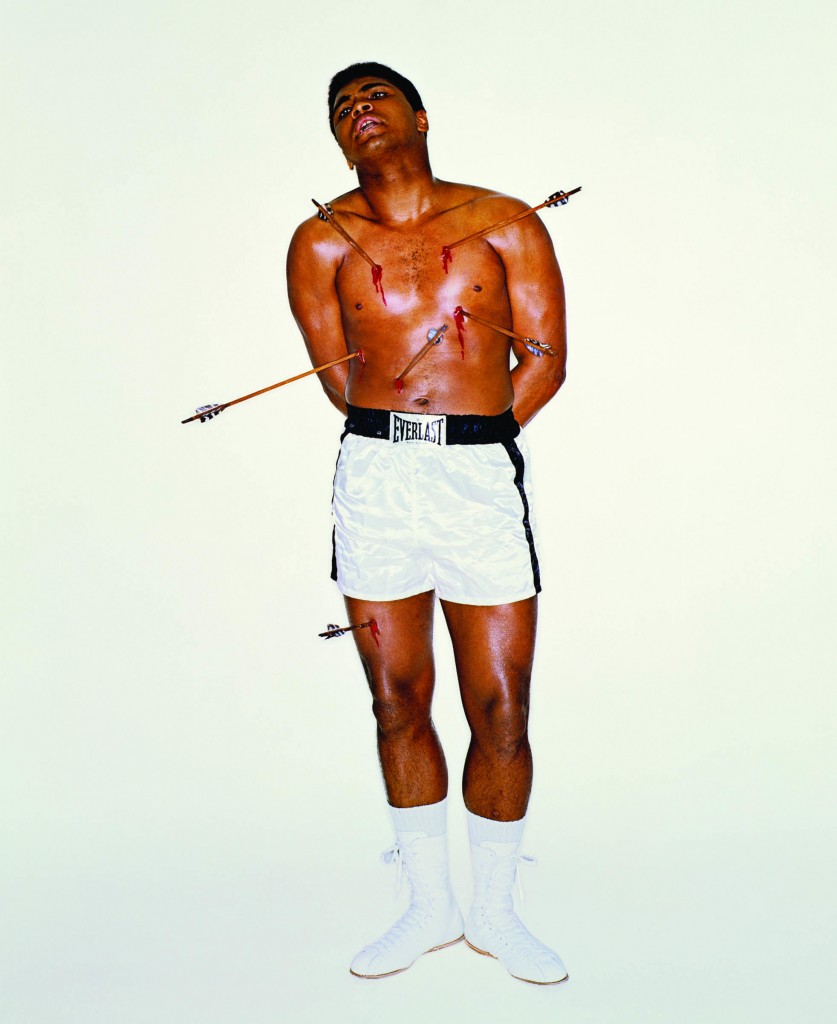 Take the Ali as Saint Sebastian image, for example. At the time, Ali (born Cassius Marcellus Clay Jr.) had been stripped of his title for refusing to be inducted into the U.S. Armed Forces. Ali, a recent convert to the Nation of Islam, was drafted to serve in the Vietnam War. Citing his religion’s belief that “War is against the teachings of the Holy Qur’an,” Ali attended his induction but refused to step forward when his name was called four times. He was arrested, tried, and convicted within two months. The resulting battle to reclaim his freedom and title led all the way to the Supreme Court.

Around the same time, Esquire had been featuring controversial covers dreamt up by George Lois, a former ad man. Lois has been widely credited for shaping a generational shift that reflected a turbulent era’s need for change, but he didn’t act alone. For fourteen years, starting in 1963, Carl Fischer consistently photographed the Esquire covers capturing the decade’s revolutionary changes during a time of an unwanted war, a sexual revolution, and a demand for civil rights.

Resource met with the legendary photographer to find out what it was like to direct “The Greatest,” why the FBI investigated him, and his experienced take on the future of the magazine industry.

On working with George Lois:

We worked over the telephone. Lois never made layouts, never made drawings for the covers. He just had the idea of what the cover should be and he would call up and say, “We have a story about Ali and the fact that he lost his title. Why don’t we do something with him as Saint Sebastian?” And that’s the way it worked on all the covers. I would work out the problems of how to do it and Lois would sometimes show up at the shoots if they were in New York, which was the case here.

It was in my downstairs studio. For this shoot I used an 8×10 camera—don’t ask me why. I mostly used Hasselblad for everything, or 35mm, but that day, I was experimenting with a new ring light. It was a very big light, and for some reason it seemed to work better on a big, clumsy 8×10 camera. But there was no reason for the format. I move from one format to another. We set up and shot the day before on a stand-in model to have the exposure and the lighting right—so when we got to the actual shooting we could concentrate just on the shoot, not on the mechanics of it. 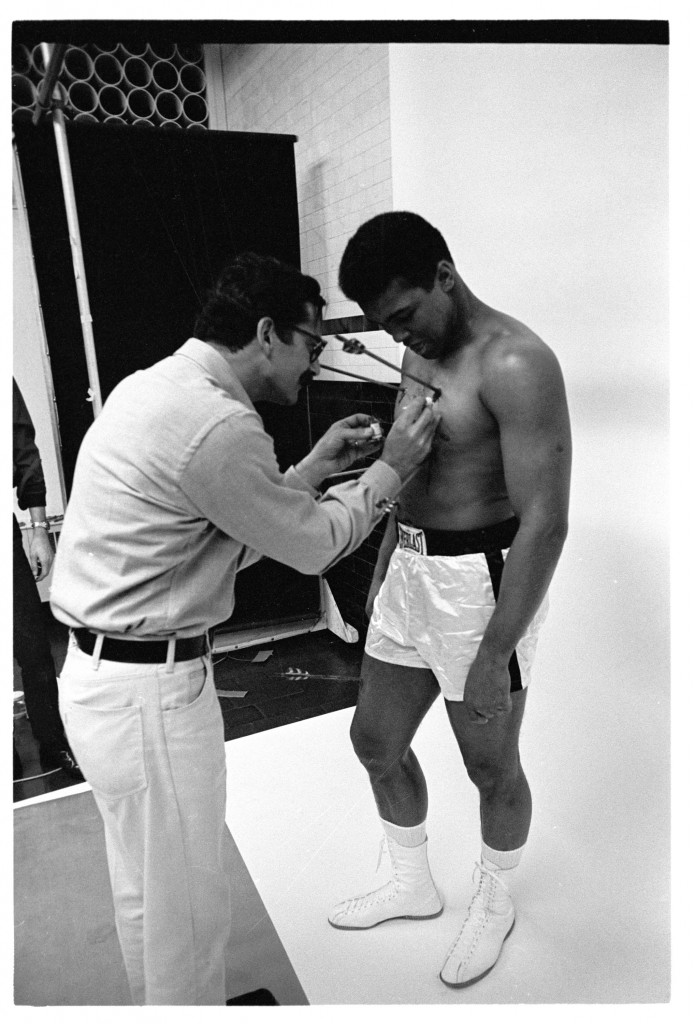 The arrows. Then vs. now:

I had the arrows made by a model-maker in New York. I assumed we’d paste them on and that would be the end of it. Unfortunately, when you pasted the arrows on, they hung down. They didn’t stay horizontally as they should. So we made an elaborate device; we put a pole above Ali and hung monofilament lines, little fishing lines, from each arrow up to the pole. You could see the lines, slightly, on the final print, and they were retouched out. But they were hard to see because they were thin and transparent.

Nowadays, we wouldn’t have had that problem; we would’ve put the arrows in [digitally]. But at the time, they had to be pasted on him physically. It was a long, boring process. Ali had to hold the position for an hour.

On today’s ‘retouch-and-go’ nature vs. yesteryear:

There [was] an article in the Times [recently] about makeup. Because of computers, models are being made up to look like figures out of wax. Magazines have always wanted things to be fanciful and unreal. Fashion magazine covers are not going to talk about the depression, inflation, and unemployment.

I’m in love with digital photography and computers. I’m not a Luddite. I think all of these technical advances are marvelous. Do we screw it up? Sure, we screw it up. But we screwed it up in the old days as well. Retouching, improving pictures with computers, is great. But there’s a big tendency to overdo it.

On retouching the Ali shot:

I’ve been going through my files and updating a lot of old pictures that I did. For example, as I had used an early form of a ring light—the first ring lights that ever came out—there was red eye. And it was originally printed that way. Lois didn’t know about red eye; he didn’t know how to correct that. But now when I reprint it, I take out the red eye. I’ve made a few little minor corrections—dust spots and other little things—which make [the image] better.

There are other covers and pictures that had run years ago with little errors in them. [Art Directors] are mostly interested in the design or the layout of the cover or the spread. They’re not so much interested in the photograph. And photographers see things that they don’t see.

Ali is true to his reputation: he’s funny, he’s relaxed. There are a lot of people who get so impressed with their position in life that you can hardly talk to them. But Ali was always a big kid. He enjoyed life, and he always enjoyed himself. He was no problem to work with. This shoot was a pain in the ass. Not everybody would stay for an hour in that same position. 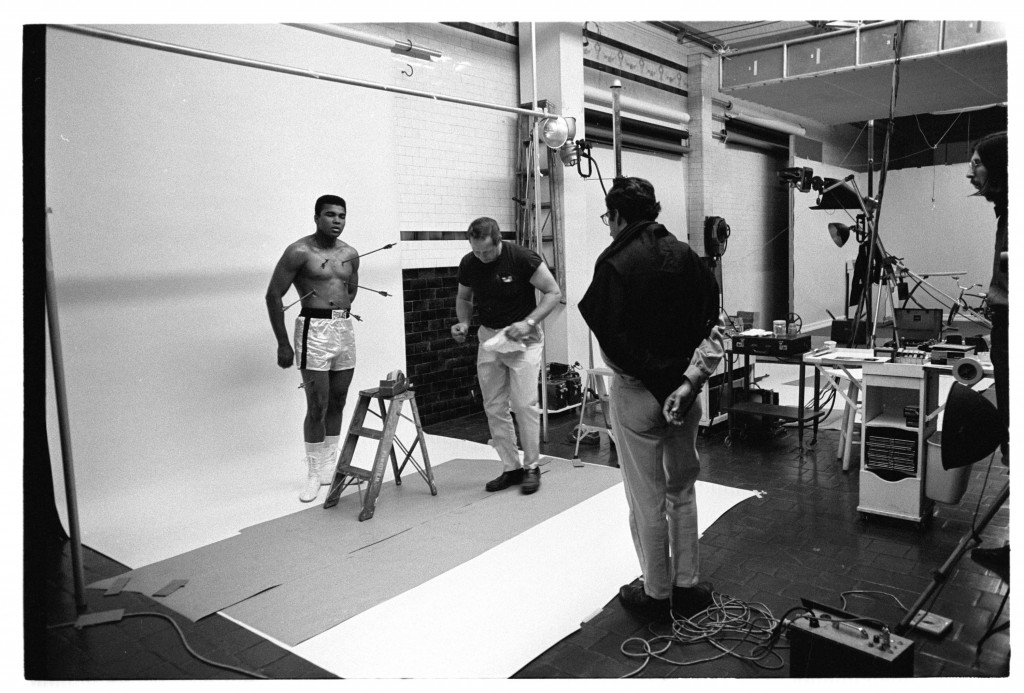 Taking a stand vs. ego:

Ali took a proper cultural stand on this and I have to give him credit for that. But he was also very self-centered. I spent a night with him when Frazier and Foreman—I think—fought for his title after he lost it. I went to Philadelphia to watch the fight with a writer and Ali. When the fight was over, he stood up on his chair and yelled, “I’m the champ! I’m the champ!” He started a virtual riot in the place! And once, I stayed overnight in his Cherry Hill home in New Jersey. As we were driving to New York in the morning, he was speeding and was stopped by a state trooper. He told him, “I’m the champ!”

On Parkinson’s having reduced “The Champ”:

“Reduced.” That’s the proper word, because he was always so free and easygoing. Now, he’s still free and easygoing, except that he moves and talks slowly. Physically he just can’t do what he did before. And because he was an athlete—and a very clever and graceful athlete—it’s kind of a shame. I don’t know how he feels about it, but I think everybody else feels kind of sad to see him that way.

On being investigated by the FBI:

I was against the Vietnam War myself. I was part of a lot of people in this country —maybe half of them—who hated the war and thought it was unnecessary, just like the current war is unnecessary. I marched in anti-war parades. I photographed people burning draft cards, and had to suffer through FBI investigations myself.

The editors of Ramparts magazine, a liberal magazine published in Los Angeles, wanted to burn their draft cards as a protest. Burning your draft card was illegal. They sent me their draft cards, and I photographed four hands holding [the burning] draft cards. Well, immediately the FBI came around. I called my lawyer and he asked, “You actually burned the draft cards?” And I said, “Well, how else are you going to do it and make it look real?” Besides, I didn’t burn them all. I saved what was left; I saved the pieces. So we went to the FBI office—which, coincidentally, was in the telephone company building, surprise. We sat in a little Kafka-esque room with just a little desk and a couple of wooden chairs, and you couldn’t even see the microphones.

There are not so many anymore, but there are some. A few years ago Esquire ran a picture of President Clinton sitting down with his legs apart. That was a very powerful image. It wasn’t an idea cover, the way they were in the early days, but it was an arresting cover.

It’s part of our conservative culture. It’s amazing how much culture has to do with the art that we do every single day. Especially we who are involved in publication art. Fine artists and painters may lag a couple of years. But I think that the new administration is going to make a difference in the way we do our artwork.

On the future of magazines:

This article originally appeared in the Summer 2009 edition of Resource, which is available for purchase here.