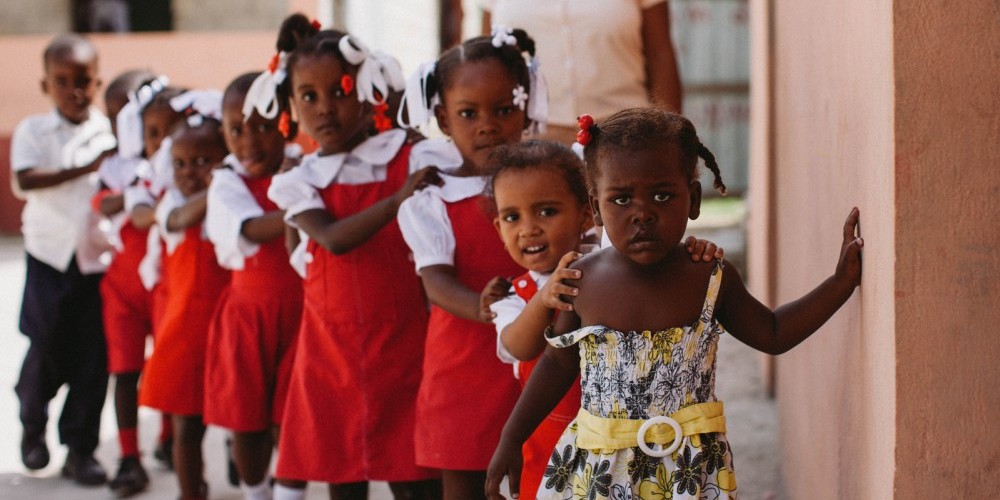 Nick Glimenakis is a storyteller at heart, dabbling in different genres of photography, from landscapes of New York City to portraits depicting all walks of life. Glimenakis’s series, Portraits of Haiti, tells a story of the struggles Haitians are going through, but also show the hope, pride and beauty that exist in Haiti. Nick traveled with a team of eight medical providers and support staff to Haiti in October with a camera. His goal has always been to create a story with his images, and his Portraits of Haiti series does just that, showing a hopeful view of a country stricken with poverty and tragedy.

How and when did you get started with photography?
I started shooting about four years ago while I was a student in Colorado. At the time, I was an outdoor education major preparing to be a ski bum in the winters and a white water raft guide during the summers. I bought a camera to take along on all the back country trips needed for class credit and was just returning with tons and tons of stuff. The more I learned about art and photography, the less I cared about which river we were running or which mountain we were tackling and was just excited to be outside shooting. This ignited a passion for travel and documentary photography and I moved to New York City to pursue it further. I now work as a freelance portrait photographer, trying to squeeze in as many adventures as I can in between sessions. 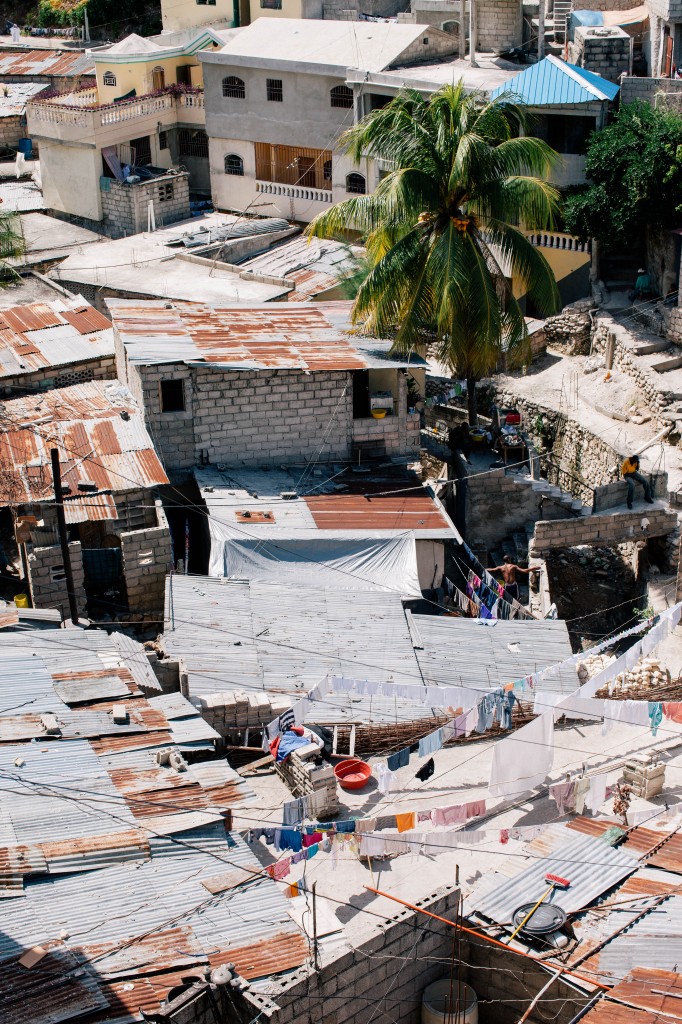 How did you find out about the trip to Haiti? Did your sister Kara tell you about it?
My sister and many of the team members who partook on this most recent relief trip traveled to Haiti two years ago for similar efforts after the earthquake. Our team leader has been going to Haiti every year for the last ten years. When my sister returned to the States the first time, she spoke of a wonderfully fulfilling and positive experience and I loved flipping through her snapshots. I was just a hobbyist photographer then with an interest in documentary storytelling and said that if she ever had the chance to go back, I would love to contribute. Last December, she called me with an invite for a mission trip this fall. 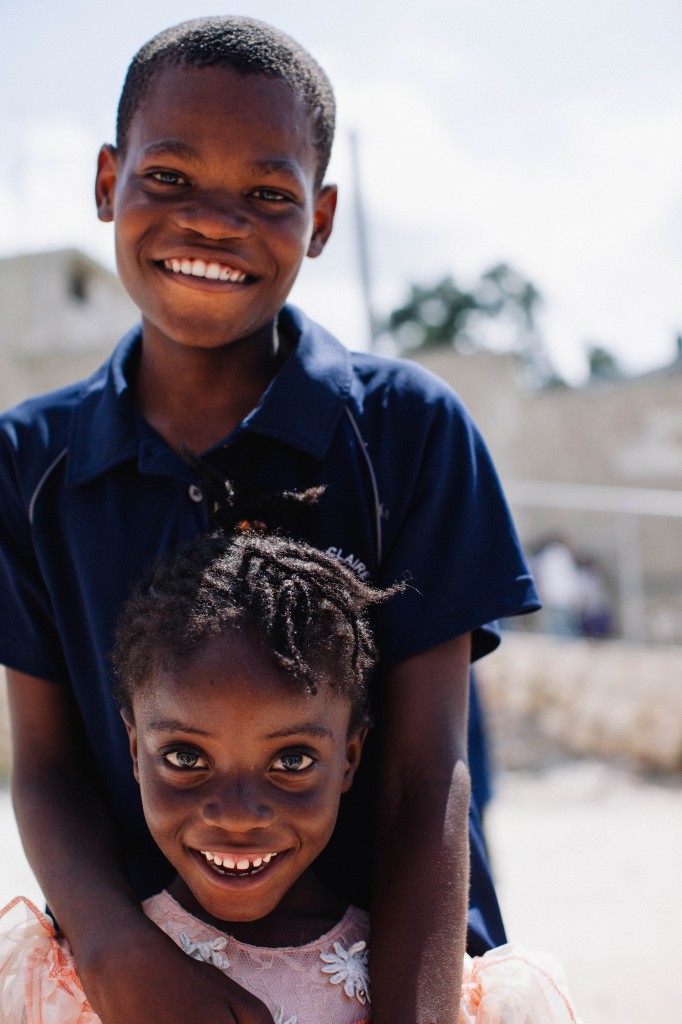 Before you went to Haiti how did you imagine it to be? Was it what you had in mind or was it different?
I traveled to Haiti with an open mind, anticipating exactly what previous media coverage had represented. In a country still recovering from a traumatic earthquake, I expected wreckage, displaced citizens and a poverty-stricken culture. I saw that. I was volunteering to be a part of medical relief and expected to see the sick and weak. I saw that, too. But what I didn’t expect to see was the beauty, pride and gratitude of a people so connected and rooted to a rich history of beliefs, landscape and customs. You can only read and research so much about a place, I think. A lot of what I hoped to take back with me was just in observing, taking in my surroundings and helping those in most need. 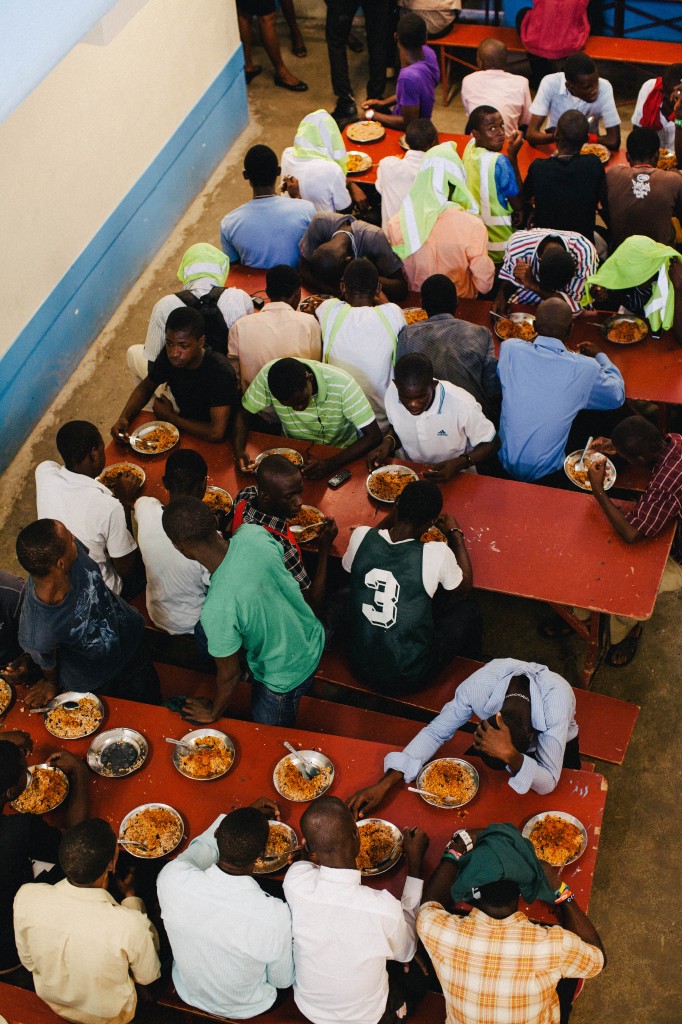 What kind of Equipment did you bring with you?
I shot entirely on a 5D Mark II with a 50mm f/1.2 lens. I stood out enough as a six-foot-three white guy–I didn’t want a huge rig at my hip. I also didn’t want to invade people’s personal space. The 50mm allowed me to photograph at an approachable distance; it let me test the comfort of those having their portrait taken without being too overbearing. I had read a lot about the often negative experiences of bringing expensive equipment to third-world countries and my sister warned me that everyone, especially the children, would often crowd around and want to see the images on the LCD screen immediately after. Some even wanted to take my picture so I wasn’t nervous or apprehensive about handing the camera over on occasion! I even befriended a boy who mimicked the action of putting the camera to my face with a toilet paper roll and, like a game of peek-a-boo, we’d exchange pictures. 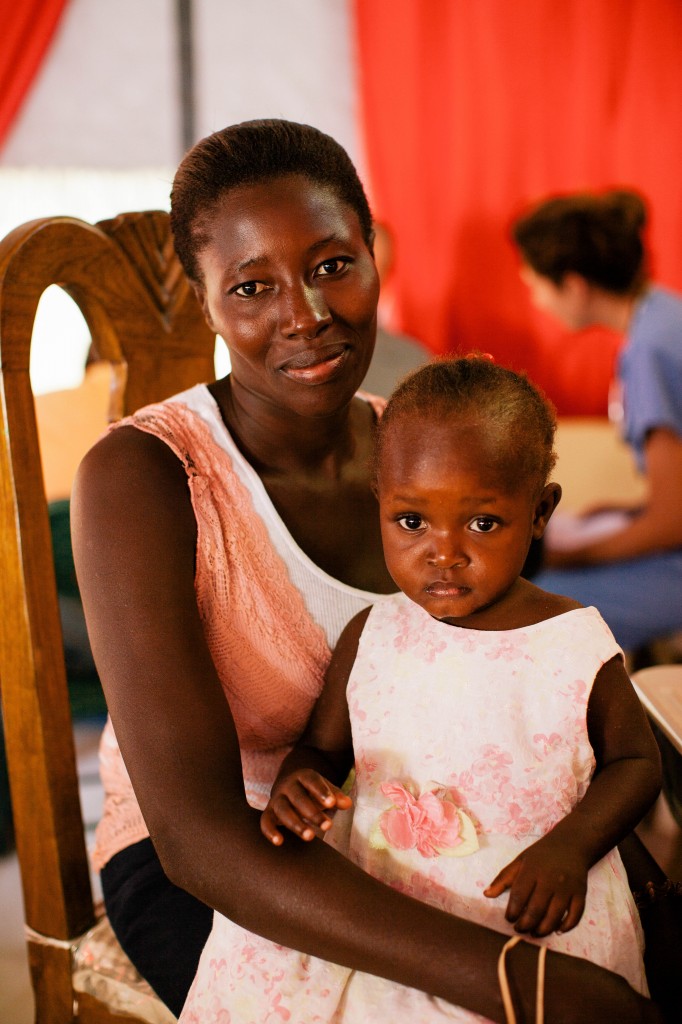 What was an average (I use the term average loosely) day like for you in Haiti? Did you wander the streets or stick with the medical team?

Each day, we set out to a chosen church, village, or site in Port-au-Prince and set up a mobile clinic: a registration table, three or four provider stations, and a pharmacy. Several times, we had the tools and space for dental and minor surgical sections. I mostly worked in registration beside hired translators who helped record names, ages, blood pressures, weight and heart rates on brown paper bags for each person to be seen that day. I met infants, children, teenagers, adults and the elderly. Each person who sat across from me complained of a multitude of ailments–anything from stomach pain and itchy skin to joint pain and trouble breathing. I jotted each condition down and directed patients to the providers who took over and finished the examination, prescribing various medications to help relieve or cure pain. When the line stalled, I would photograph. 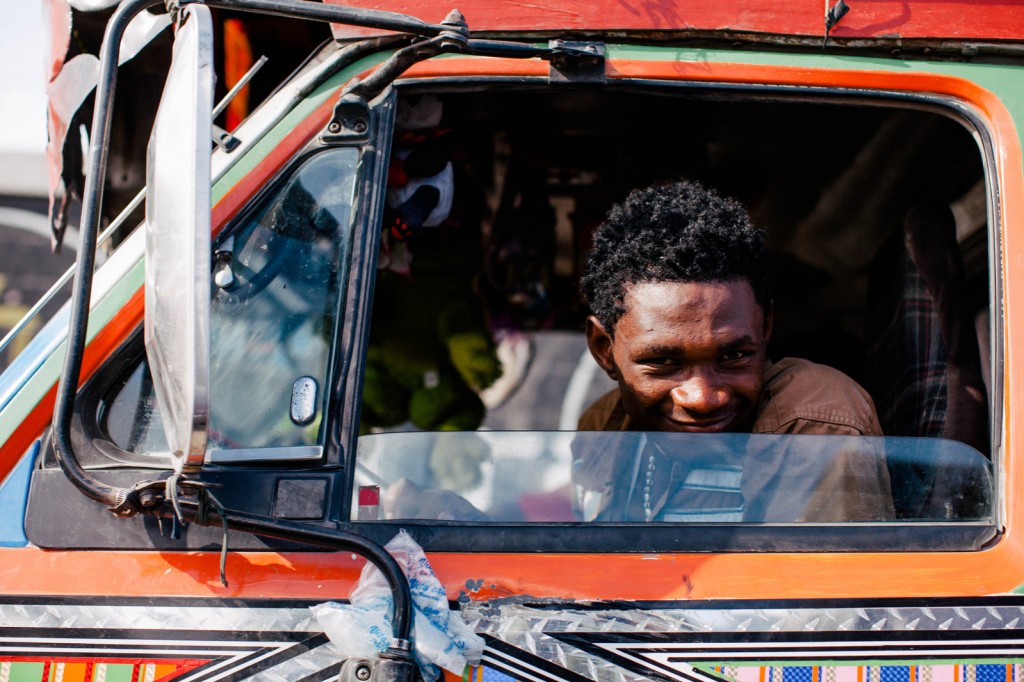 There wasn’t much downtime, either. Even though we worked a pretty regular nine-to-five day, our evenings were filled with preparing and separating medications, sanitizing any tools and equipment we used and absorbing what we could of Haitian culture, visiting “Tin City,” restaurants, and orphanages. Our days were also emotionally tolling. I did take to the streets one time but that adventure was frowned upon by some as meandering the streets of Haiti alone isn’t necessarily the safest idea. 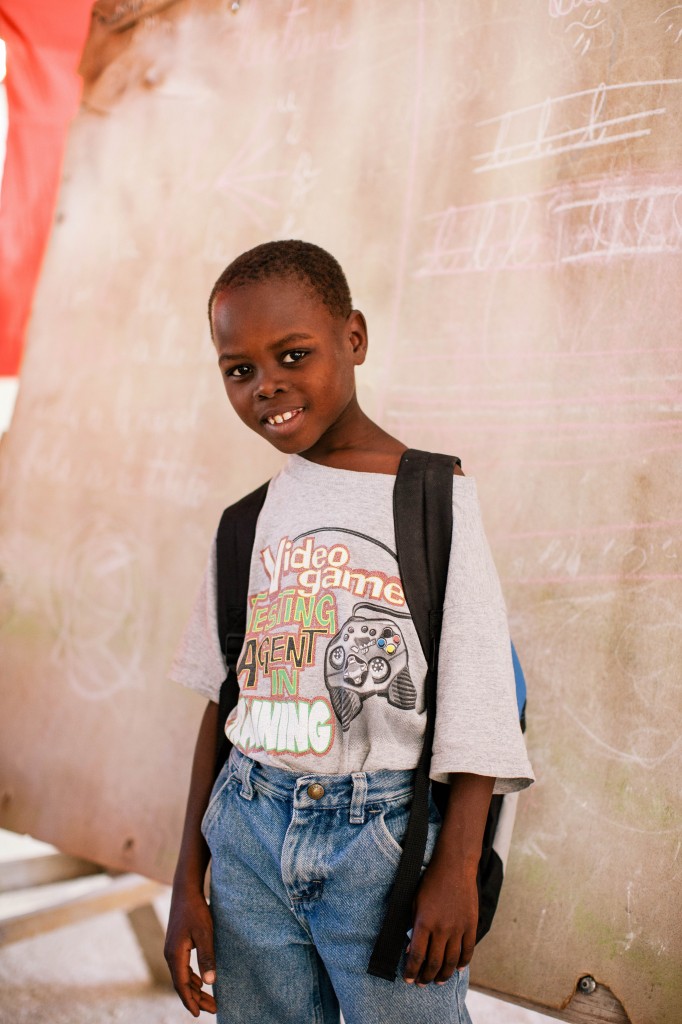 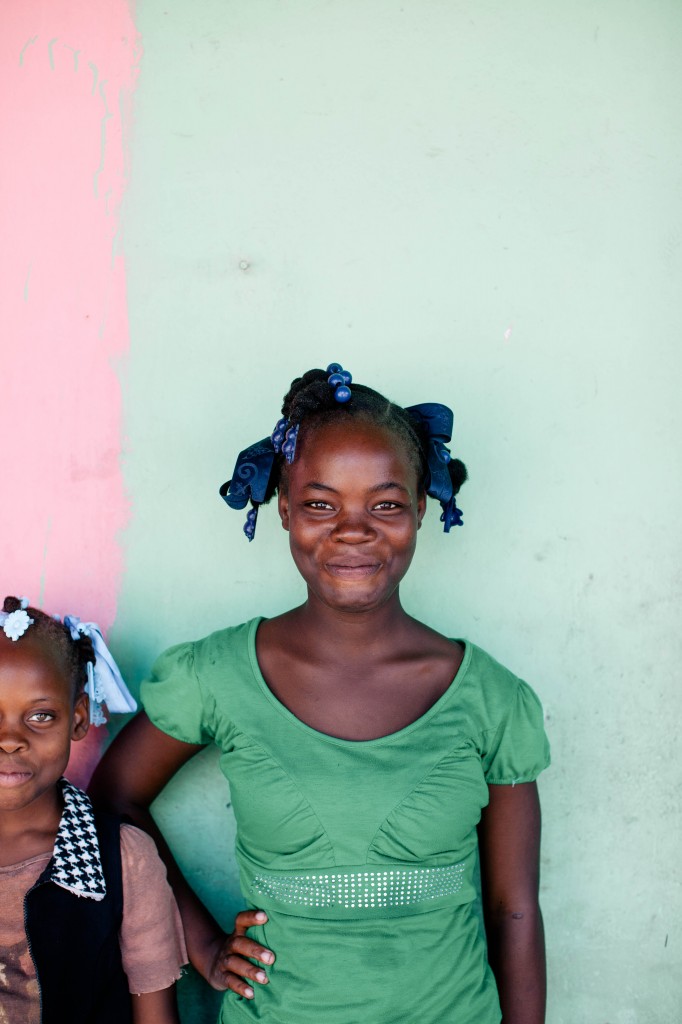 I hear you gained the nickname “White Rice” after the trip, can you talk about that experience a little bit?
On our first day, after attending a small church service, we traveled to a feeding center for children. Our host took me to the second floor to get a bird’s eye view of the cafeteria, thinking it would be a great photo opportunity. As I was looking through the viewfinder and framing my shot, a teenage boy used his spoon to slingshot rice at me. This was a very expressive introduction to my presence as a “blanc” with a camera. I never wanted to be a trigger-happy tourist with my camera glued to my face, so from that moment forward, I was very cautious and selective with whom I’d photograph, always asking for permission first. 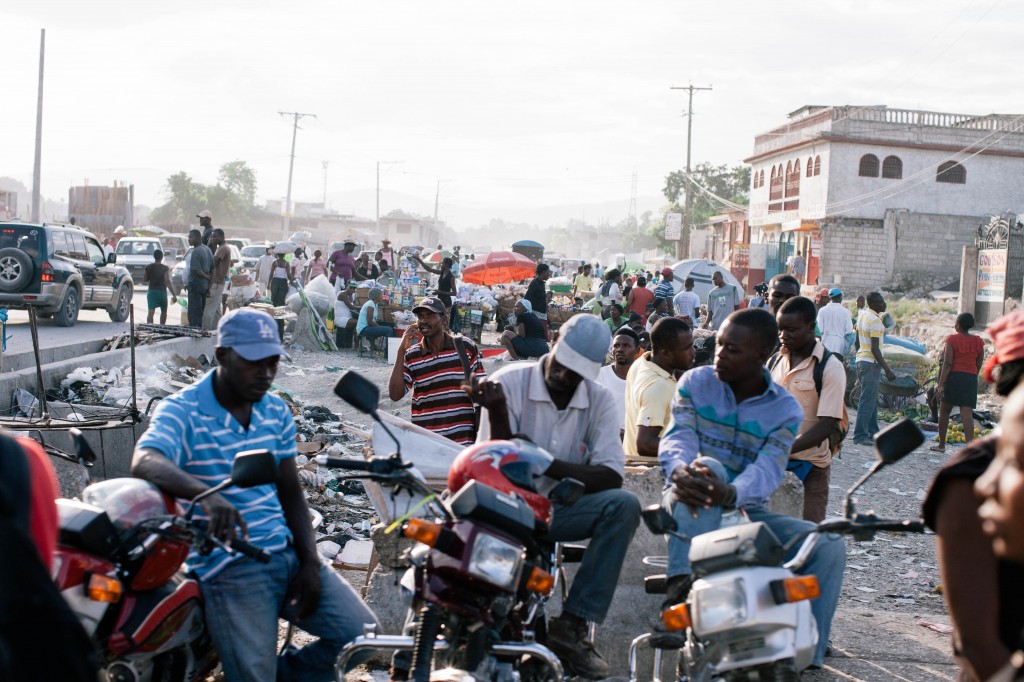 Steve Gilbert said in his article on Sentinel Source that some Haitians feel that white people “are tourist voyeurs snapping souvenir photos of their poverty.” How would you respond to that allegation? What was the purpose behind your Portraits of Haiti series?
Medical relief was always the first priority of this trip, photography second. While I had some idea as to what I’d witness, I had no sense as to what I’d actually photograph. I’m a portrait photographer in New York with experience shooting landscapes out west and wanted to carry those same principles and experiences with me. I can absolutely empathize with the irritation of a foreigner coming to your home and snapping photos. It certainly wasn’t always welcome. I couldn’t help but think this was the first time the Haitians had seen themselves displayed on a camera’s LCD screen, but I was not naïve to the probable slew of photographers who had passed through before me and did the exact same thing. My intention was never to present a compare and contrast body of work. I simply photographed what I saw. There were times during our trip where photography was not permitted for various reasons–including personal. I always wanted to respect their privacy as well as acknowledge that I was a visitor. 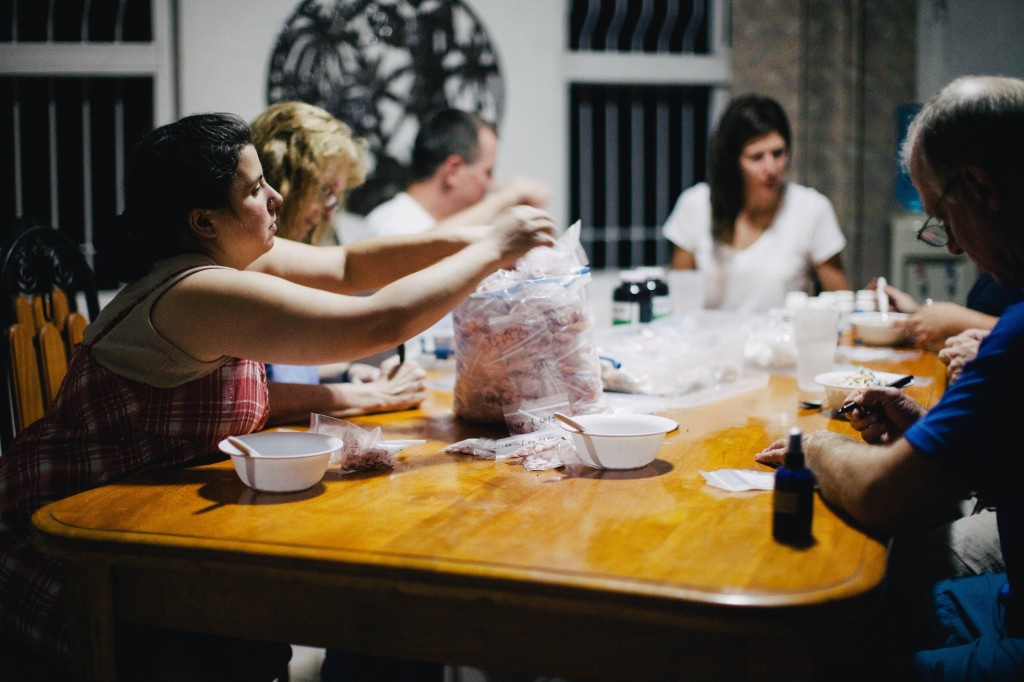 What was the most uplifting moment you had while you were in Haiti? What was the most heart wrenching?
Every night at dinner, we would go around the table and each share our highs and lows of the day. I always loved these storie–you’d get so caught up in what you were doing, not really ever having a chance to check in with the other team members, so it was always interesting to hear about others’ experiences.
I would say the most heart wrenching for me was listening to and writing each patient’s list of ailments. At times, I would fill the entire front side of the brown paper bag. Some Haitians would just say, “Everything hurts.” This was very sad to me.
The most uplifting was always the looks of relief and gratitude from the Haitians after seeing the providers, filling their bags at the pharmacy, or, my favorite, the sheer excitement in getting an adjustment from our team’s chiropractor. 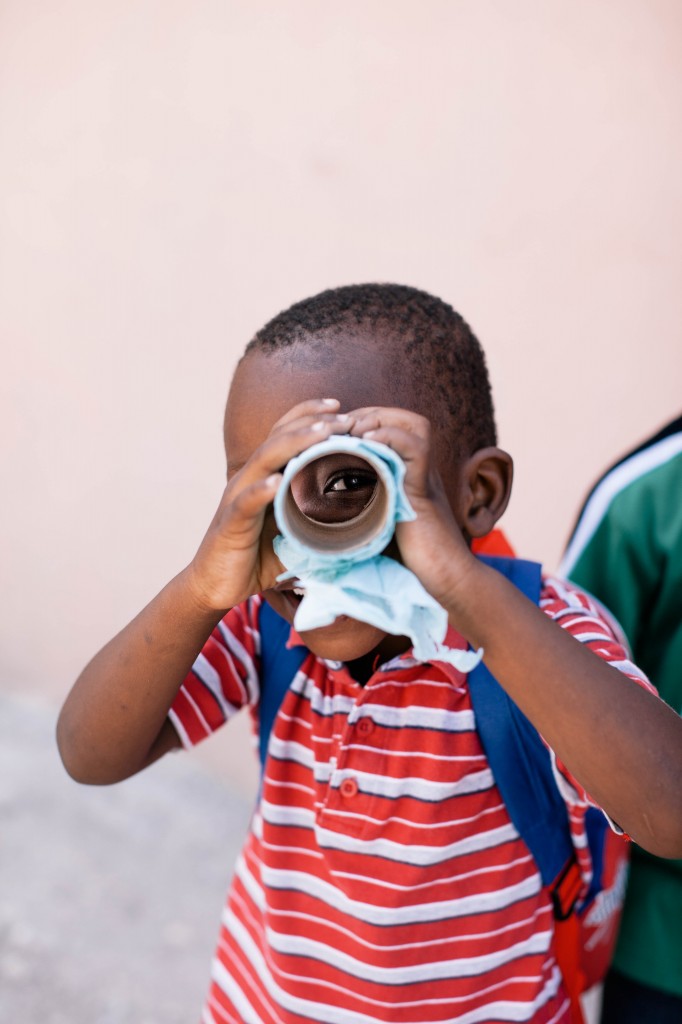 What do you like about street photography?
The energy and rush I get when photographing, essentially, moving targets. When not in the clinics, I typically photographed out of the passenger side window or through the cage enclosure atop the bed of our host’s truck. The time to react was minimal and fairly jarring but the results were raw, un-staged, and deliberate. Most people I photographed in this capacity were entirely unaware I was taking their picture and that’s a favorable element of street photography for me. I did, however, pull up to a driver in a “tap tap” who acknowledged my request for a portrait, and that image ended up being one of my favorites. Plus, the driving habits in Haiti are like no other–New York City included, if you can believe it! 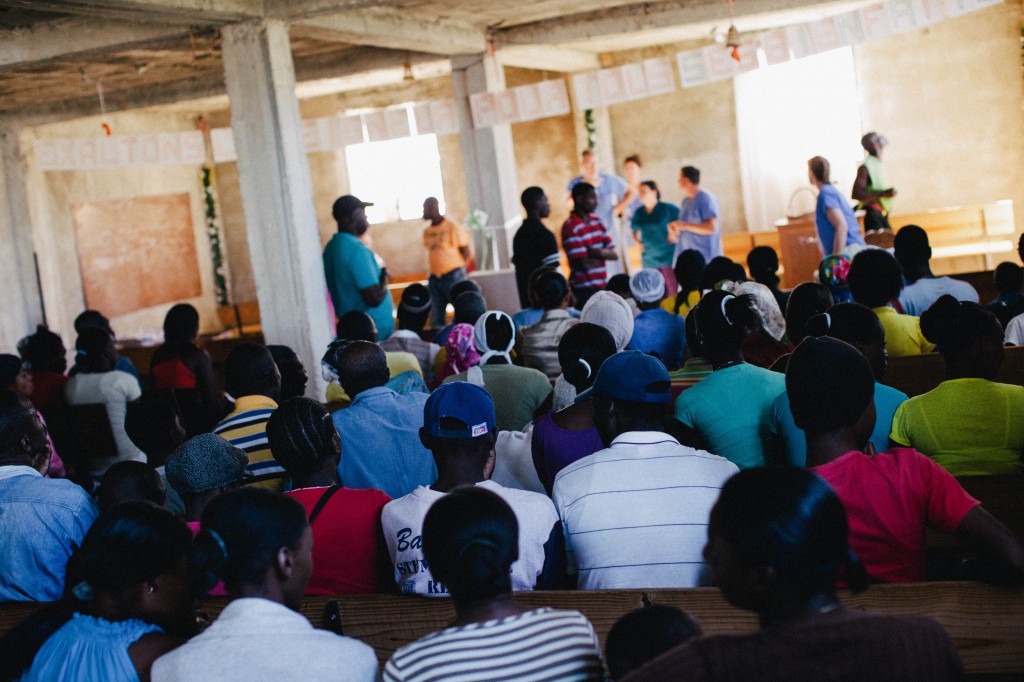 Which image or images in your series sums up the atmosphere of Haiti?
I don’t think one image could do this, really. I saw many facets of Haiti, all very different from one another. Obviously, the urban landscapes and street perspectives showcase the lively, vibrant life of Haitian culture. But I think a lot of the portraits represent a certain pride, curiosity, innocence, beauty and joy that are all such indicative features of Haiti. 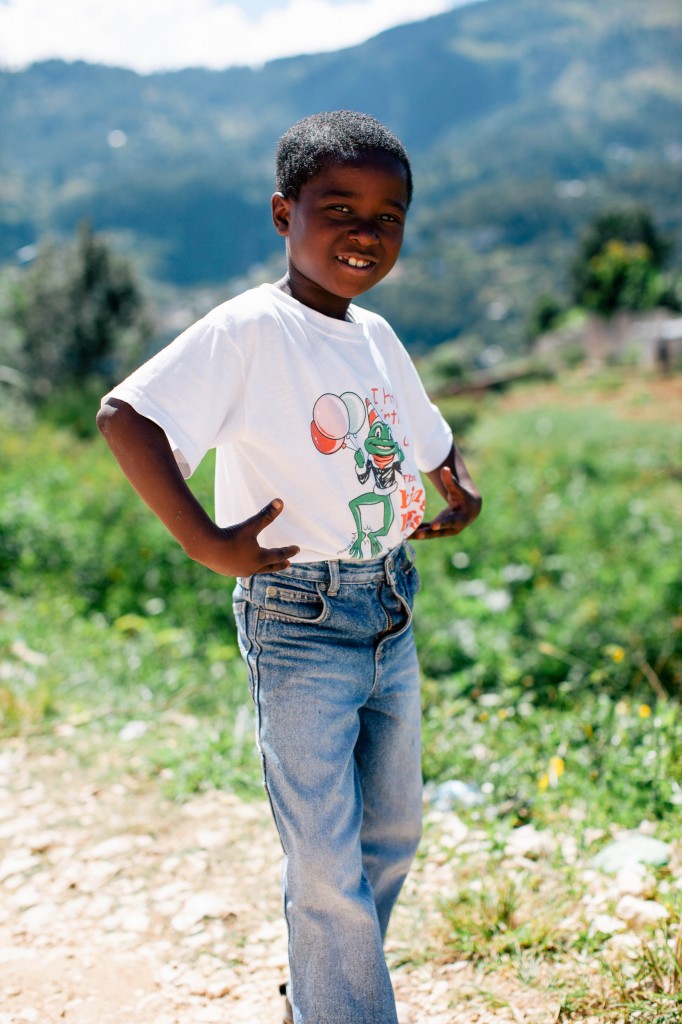 Steve Gilbert talks about Haiti being a paradox, a mixture of horrible tragedy and pure kindness; do you think your series captures this paradox?
As a team, we discussed our experience a lot and how to try to effectively communicate it to friends and family back home. Revisiting images and writing about my time in Haiti has been taxing but finding the words to tie the context, emotion and stories of the images together is becoming less straining. Of the over 2,500 images I made, more than half are portraits. I connected with people so unlike me and that was absolutely riveting. But a second glance proves that a connection only existed because these people are exactly like me. With each passing day, my outlook on the presentation of these images changed. 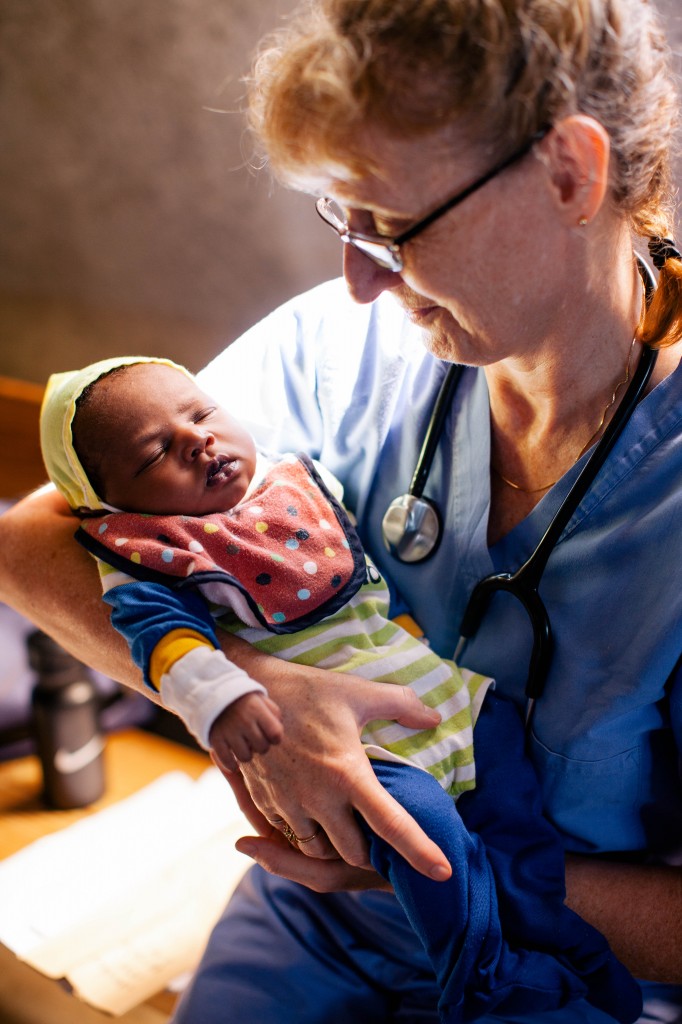 I distinctly remember a conversation on our last night together regarding this topic. Our host had accommodated photojournalists in the past–more so shortly after the earthquake–who only focused on the devastation of the Haitian villages, targeting a broken people and sharing visuals of chaos, sadness and upheaval. He also said it’s ineffective to focus solely on happy children excited to see something new in you, the “blanc.” While my series absolutely weighs more heavily on the latter, I didn’t feel searching for more disheartening scenes and landscapes was time-worthy. My wish for the series is to illustrate a hopeful perspective of Haiti, a country in constant recovery and progress–one portrait at a time. 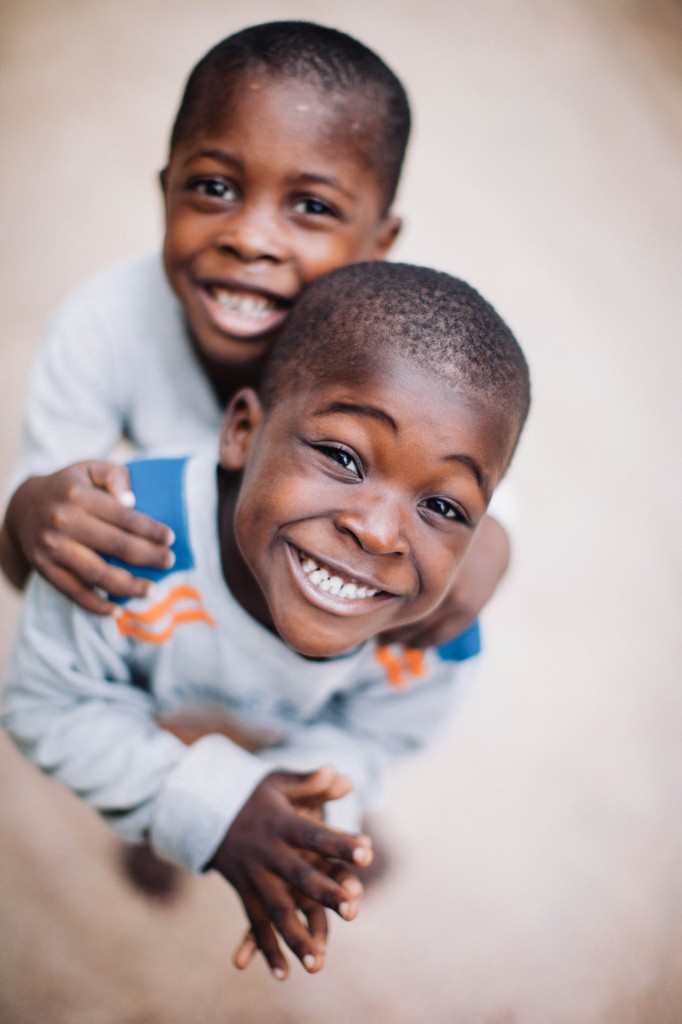