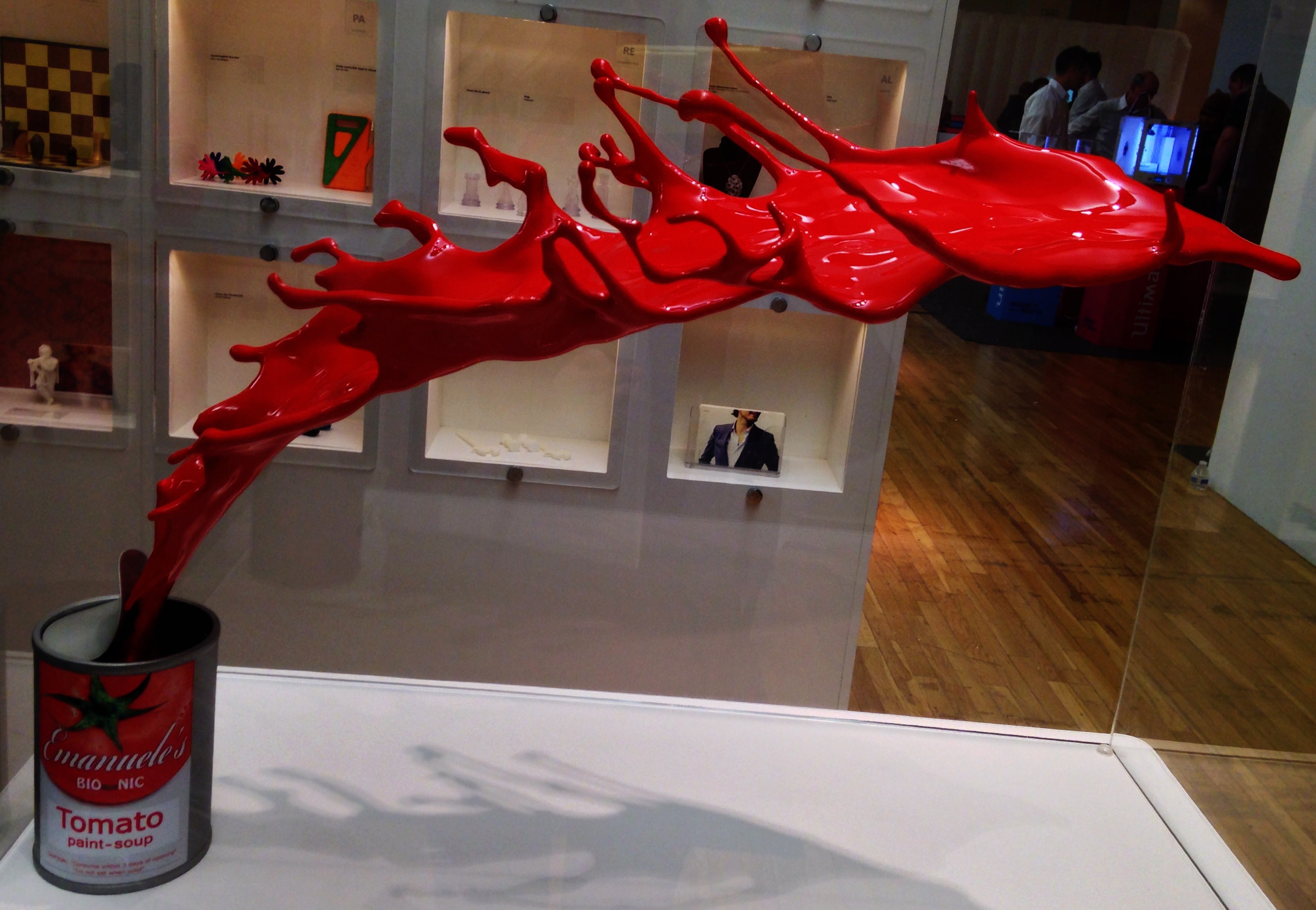 Last week, the traveling 3D Printshow stopped by the Metropolitan Pavilion in Manhattan’s Chelsea, an area buzzing with art and technology. Hosted by the esteemed Adobe brand and the pioneers at Shapeways, it’s the biggest showcase of 3D artwork ever put together. Last year, the show in Paris attracted 19,000 attendees! Resource Magazine‘s co-founder Alexandra Niki and Tech Editor Adam Sherwin secured their tickets – I happily tagged along, snapping photos and interviewing the people involved. Before this experience, there wasn’t much I knew about 3D printing. It was a term I encountered a few times but never truly invested thought in, like gadgets from a science fiction movie. But in only a matter of years, the craft has improved in exponential measures. From machine parts and movie set pieces to bionic ears, the potential of 3D printers is astounding. It is also very promising for environmental reasons, because the ever-growing variety of materials 3D printers are able to work with can be recycled over and over again to create fully functional items. So as I found myself standing in the middle of the vast Pavilion gallery, surrounded by some of the most intricate sculptures I had ever laid eyes on, it became time to face the facts: The 3D Printshow slogan is this: “The internet changed the world in the 1990s. The world is about to change again.” And change it will! In fact, I’m sure that by the time 2015 rolls around, 3D Printshow exhibits will be a completely different breed. Therefore, since each show displays the pinnacle of 3D production at the time, knowing how things have changed from one show to the next is a pretty good way to measure the speed by which this technology advances. The 3D Printshow was founded by Kerry Hogarth and originated in London. It is one of the few conferences that focuses on 3D content and art, and not just the technology. This year, it opened in NYC from February 12 to 15, with ticket costs ranging from $10 to $200. The event Resource Magazine attended was divided into three segments: an art gallery, a fashion show and an exhibit of the machines themselves. It started at the top floor and worked its way down with some careful timing and great planning. If you missed it, there’s always next year (after it has revisited London and Paris). In the meantime, take an imaginary walk through this year’s event with me via the words of some of the amazing artists and companies involved. And of course, enjoy some pictures! One of the event’s co-hosts, Shapeways is one of the world’s largest 3D printing service providers. Most of the artwork commissioned for the 3D Printshow was printed by Shapeways. The website offers every type of service, such as connecting people with designers who can make their ideas come to life, providing access to printers for 3D artists, as well as an online marketplace for anyone to show and sell original 3D items. A peek at Shapeways’ website shows us all sorts of designs, from pop culture symbols and hilarious pieces to meaningful works of art. Adobe has featured 3D capabilities in Acrobat Photoshop products for years. In January, the company announced that Adobe Photoshop will begin providing 3D printing to mainstream creatives. Right now there is a small community using these expensive and complicated tools, but the folks at Adobe plan to bring it to the millions of people that use Photoshop. The way it’s being done is by positioning Photoshop as a finishing tool, although some people do create content from scratch in Photoshop. Ultimately, the goal is to make 3D printing as easy as possible. To attain that goal, Adobe has recently teamed up with two companies, Sketchfab and MCOR Technologies. 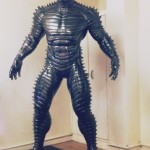 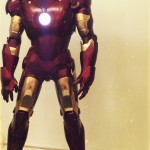 A 3D artist and designer community, Sketchfab provides a platform for anyone to showcase their 3D work and interact with other creatives. Best of all, there is no need for downloading – everything is supported on the website if you have a WebGL-compatible browser. A number of exporters are available for easy and efficient publishing. In a new development, Photoshop now has the ability to upload content onto Sketchfab. MCOR Tech was in production by 2010 and won 3D Printshow Global Awards’ brand of the year in 2013. Photoshop users can also now send their designs directly to MCOR. According to Deirdre MacCormack, MCOR’s Chief Marketing Officer: “We’re the only paper-based 3D printer in the world and we can do full color. We use regular sheets of office paper and create beautiful 3D models. Normally we take sheets of paper and process them one at a time using a Tungsten Carbide Profile Cutting blade to cut a 2D profile on each layer. Then they’re stuck together using a water-based adhesive between every layer until the structure is formed. It’s readily-available material and it’s not propriety like our other competitors’. So it’s a very inexpensive way to print. You can also use pre-used paper, so it’s a great way to recycle!” Fuel3D launched on Kickstarter in August last year and hit the target in just 36 hours. The company offers the world’s first handheld camera to provide stereometric and photometric technology to produce 3D scans. It works very much like a camera: you just point and shoot. To create a 360-degree model, simply take a number of shots and Fuel3D’s software stitches it all together. Fuel3D has worked really hard to bring the price level around consumer level. “We believe strongly that as 3D printing grows, people will want to do some impressive and customized designs,” says Stuart Mead, Fuel3D’s CEO. “Like a mug with a person’s face on it, which makes a great and hilarious gift, most of our orders have been for individuals.” 
“Voice is invisible, and like other sounds, have forms in space that our eyes can’t see. I created an algorithm to transform the sound of one of Obama’s speeches into a voice print, a three-dimensional materialization. He was actually talking about 3D printing and it happened exactly one year ago today. A voice is like a fingerprint. It’s unique. If Barack Obama said the same speech at a different time, it would look different. So this can’t be recreated.” “I started back in ’97. At that point in time, I was working with PowerAnimator until I moved to MAYA, which is pretty much an industry standard in 3D animation software. I wanted to design party favors for my wedding because my wife wanted custom party favors. Shortly thereafter I googled 3D printing and that was my introduction to the craft. My major inspiration was the Japanese Samurai. Particularly, if the Samurai had continued onto modern times, how the look of their armor would have evolved. They may have picked up aesthetics from the West and other influences.” “These sculptures cannot be built in any way other than 3D printing. The idea started out years ago as a drawing series I did as a surrealist. As a sculptor I wanted to make them three-dimensional. I tried everything. Wax, putty, stone and metal – from the composition to the symmetry to the internal intensity – nothing held up. It would collapse under its own weight or wouldn’t work for other reasons. Then I was introduced to 3D printing in the early 90’s and started working with it over the years. Even with the vision I had, it just wasn’t happening at that time. Then it started developing. Technology caught up and so did the materials that were compatible with my design. This is the result.” 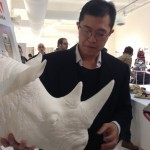 “I’m from Adobe and they said to just go crazy and make something cool. So I had a small sculpture of a rhino, and thought it would be cool to make it big – like a wall mount of a hunting trophy. This way you can enjoy the beauty of it without killing an actual rhino. But that’s easier said than done. The head has a lot of detail, over 7 million polygons worth. So, there were millions and millions of little squares that had to be described. Now you can’t just go and make something like that and it figures itself out. There’s a lot of steps involved and it’s all manual. The computer isn’t that smart. I had to come up with the structure that would not compress or twist because of the size. The sculpt took me three days, but the inside took me weeks. The best thing about Photoshop, though, is the proofreading. It finds the weak parts of the structure and helps strengthen them.”

The show began with a line of dancers performing gymnastics-style moves and wearing 3D printed body accessories. Amidst the pumping and energetic music of the world’s first 3D band, designers such as Madeline Gannon, Kay Kwok and Pia Hinze unveiled their innovations. 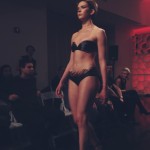 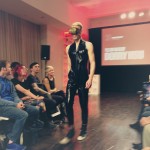 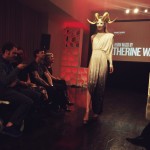 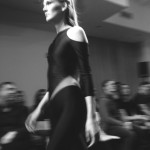 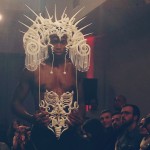 All in all, the 3D Printshow was an event to remember. It was the perfect showcase of the relationship between art and technology that exists nowadays. Since there were so many artists and companies involved, it is truly unfortunate not to be able to include them all here! However, next time the 3D Printshow comes to town, get yourself a ticket and see it for yourself. We promise: you won’t be disappointed.