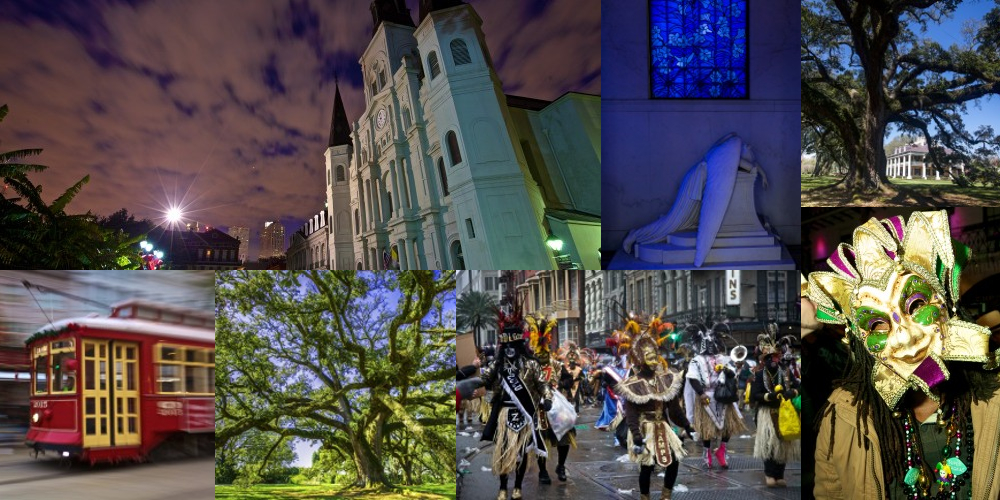 On the Road with Luke Ballard: Photography Workshops (Part 5)

This week’s installment starts and ends with being miserable in rural Alabama. This is quite an achievement when you consider that this week was spent in New Orleans, photographing Mardi Gras and teaching workshops in one of my favorite cities in the world.

When I left you last week we were journeying from Savannah to New Orleans racing to get there in time for Fat Tuesday, the last day of Mardi Gras. Unfortunately for us, and our busy schedule, we weren’t going to see or experience most of Mardi Gras, which has essentially been going for two weeks by the time we got there.

We broke our journey to New Orleans at a Flying J in rural Alabama. Flying J are basically gas stations pretending to be RV parks, with no electricity, water or sewerage hook ups and a lot more noise – they are however convenient for situations like this where we drove as far as we were able and needed to stop for a few hours before keeping driving. 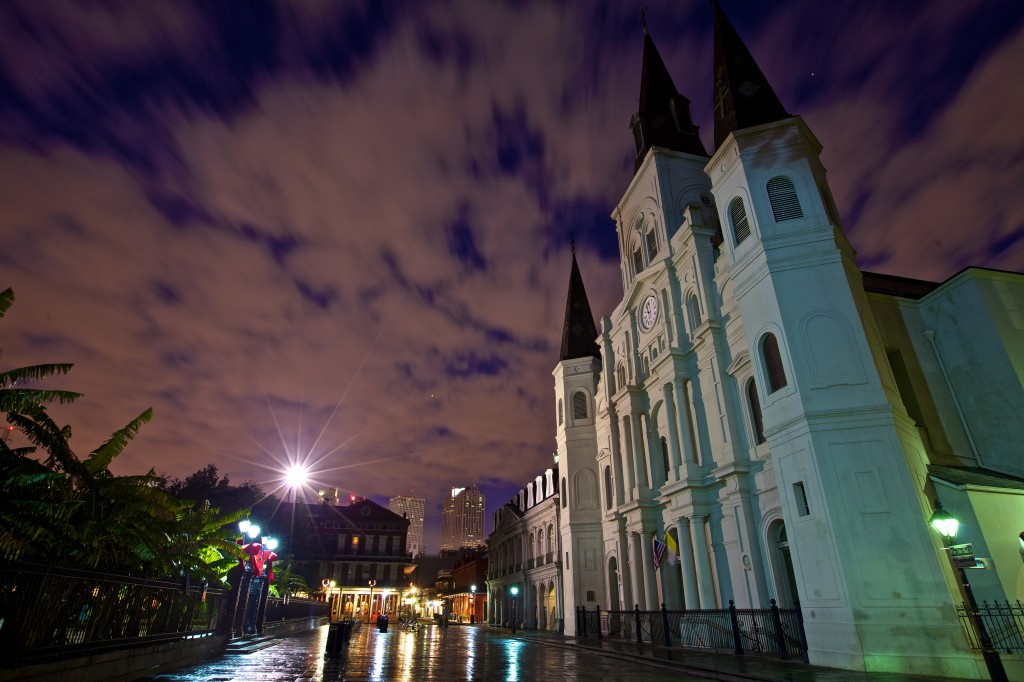 The Denny’s attached to the Flying J was probably the worst I had ever been to. After leaving us for 15 minutes to study the menu, the waitress came over and gave us a run-through of what they were out of. That turned out to be 80% of the menu. Really. I placed my order and asked for the New Special Bourbon Sauce when the waitress looked at me and said they were out of bourbon sauce as well. Having had enough, we got up and left and eventually found a quaint little Mexican place that was better in terms of service, they had everything on the menu in stock and were also liquor-licensed!

After driving through the day we finally arrived in New Orleans and got settled in to a RV park. Fat Tuesday in New Orleans was wet and cold, despite having been beautiful and warm for the previous two weeks. Nicole now insists that I stop telling people I control the weather.

The parade was amazing, though we were waterlogged within moments. Our favorite was the marching band singing “God it’s Cold – Can we Stop Now – Let us Go Inside!” Maybe you had to be there but they were in tune and rhythmic and everything. 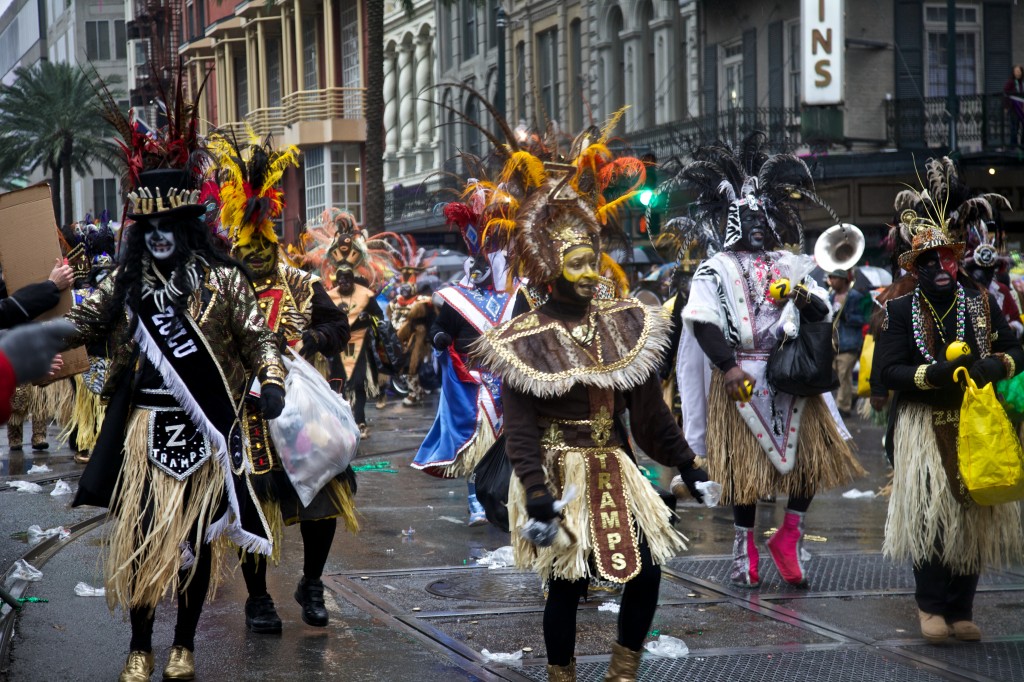 Unfortunately at this point, we suffered a devastating loss on our journey. The 5D Mk II that I have been using for years – the camera that realistically launched Remember Forever passed away on Tuesday afternoon. It doesn’t look like being moisture from the rain (my first thought) as he had been poncho’d in plastic for the day out in the wet. It just looks like age and use. He had a good life, traveled everywhere and was taking photos until the end. He will be missed.

So armed with a Canon 1000D (attached to an L series lens) we went back in to Bourbon Street to cover the actual party. In mourning for my camera and friend, I may have consumed a little too much alcohol and much of the night remains a blur. I’ve been looking at photos I took from the night and trying to piece together what happened a la The Hangover. Feel free to send me an email if you remember us.

New Orleans is not just about Mardi Gras – as I said earlier it is one of my favorite cities in the world, and when Remember Forever is ready to open another city on a permanent basis, New Orleans will be next. 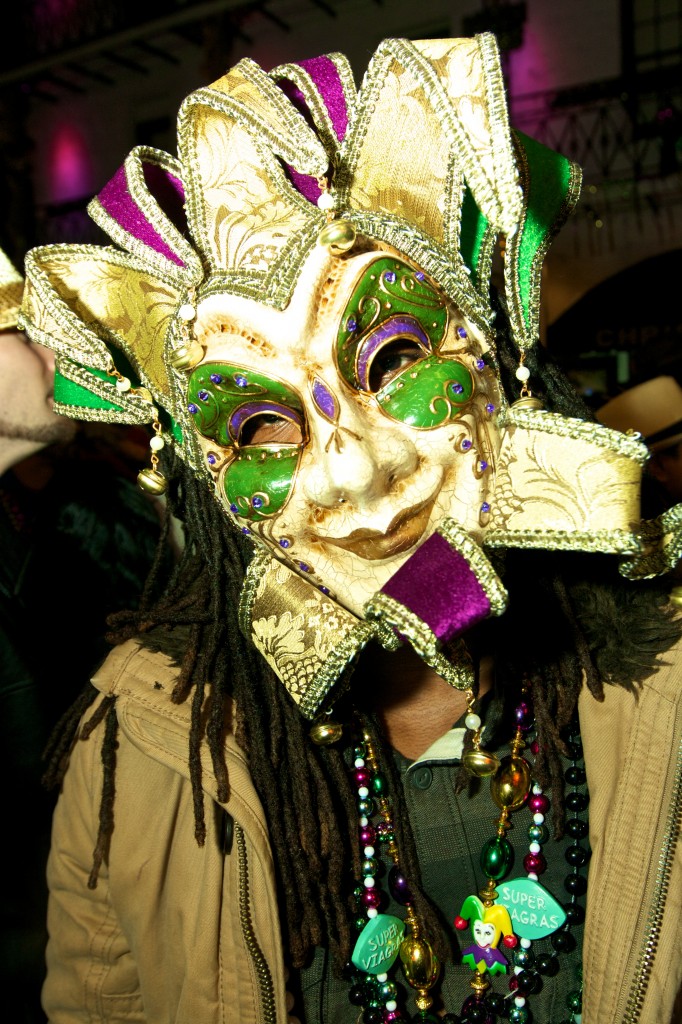 The only things I don’t like about Louisiana are Louisiana drivers. I though New Jersey was bad but let me tell you … enter roadways in New Orleans with your affairs in order! On no other occasion that I’ve visited New Orleans have I driven myself – the streetcars and buses are so good, but with the RV we had to brave the streets. If you’ve seen Mad Max you kind of get the picture.

After purchasing a new camera (Canon 5D Mk III) we set out to teach workshops and photograph the city. For me photographing the French Quarter is always a treat, along with St Louis Cathedral, Jackson Square (especially in the hour before sunrise) and the Streetcars. New Orleans has such a vibrant culture that really shows itself on camera. Streetcars are always fun to photograph, especially if you can get your panning technique down. Let’s talk about that a little bit. 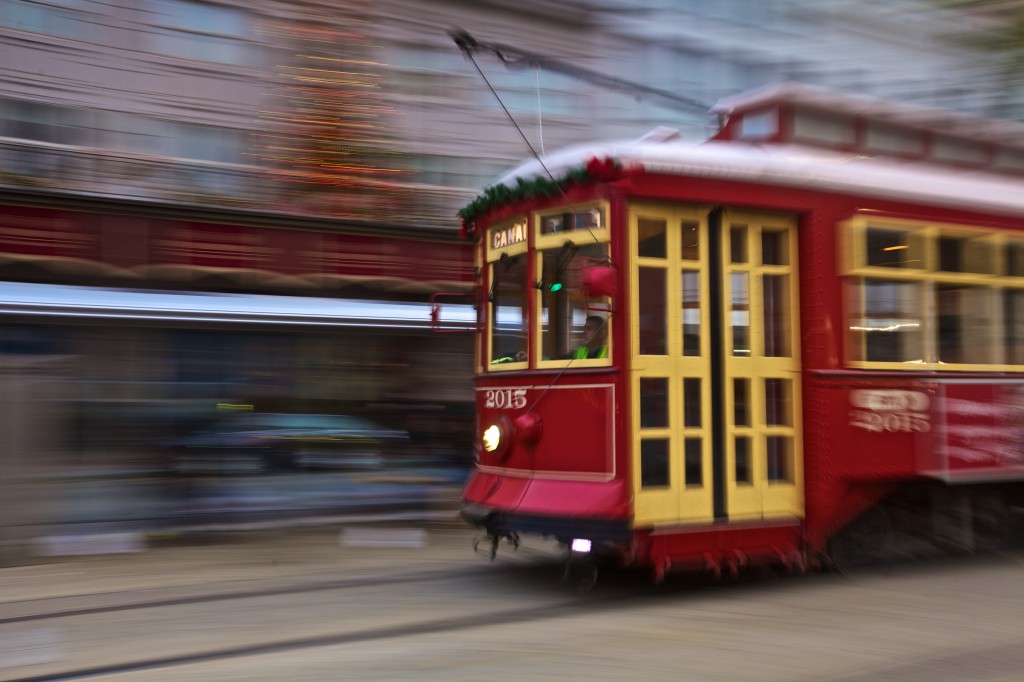 This works best as you’re approaching sunset as you will have a little more control over light. ISO 100, and F8-16. You’re trying to get your shutter speed to about half a second but still want the widest aperture possible. So with a half a second exposure you now need to practice being a human tripod. You also need to practice panning at the same speed as your moving object. There is a lot of debate about whether you change to Servo or AF-C for this; I prefer being on one-shot or AF-S. Wait for it to come into your frame, press your shutter focused on the part that is important and pan along with the movement at the EXACT same speed as the moving object.

If you are going to leave the French Quarter, then the two destinations for photography are cemeteries and plantations. On this visit to New Orleans I selected Metairie Cemetery and Houmas House Plantation. Both of these choices turned out to be amazing.

Metairie Cemetery is home to what has become known as the Weeping Angel in the Chambers Hyam tomb. This statue of a angel mourning has become rather popular with New Orleans photographers. It is also extremely hard to find as no photographer wants to give you directions, in order to limit the number of people with photos of the statue, as they want to sell you theirs. 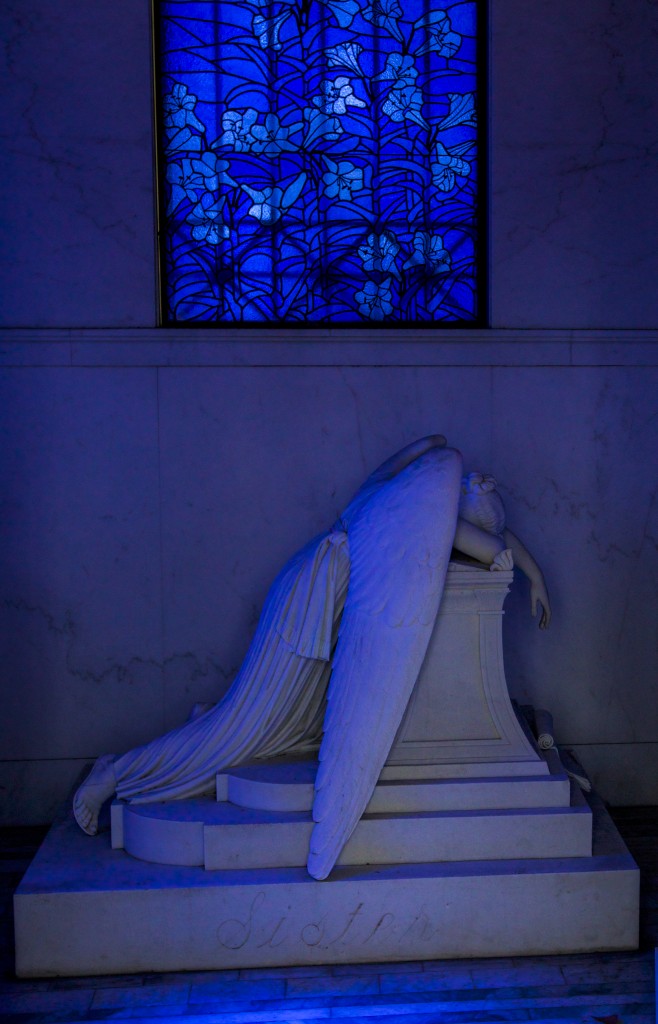 If you are going to New Orleans and you want to photograph the Weeping Angel here is where you go. Enter the main gates of Metairie Cemetery and immediately work your way around to the left. The tomb with Chambers Hyam and the weeping angel is located along the fence line to the left of the main entrance (or right if you’re in the cemetery and looking outside) and looks like a Greek Temple. It has blue stained glass windows; if you know what you’re looking for, you can’t miss it.

Houmas House Plantation is home to one of the most spectacular live oak trees I have ever seen. I have taken hundreds of photographs of this tree and obviously haven’t had time to process them all. I usually thoroughly avoid HDR photography but the shadow and story on this tree compelled me to try it here also. Let me know what you think. 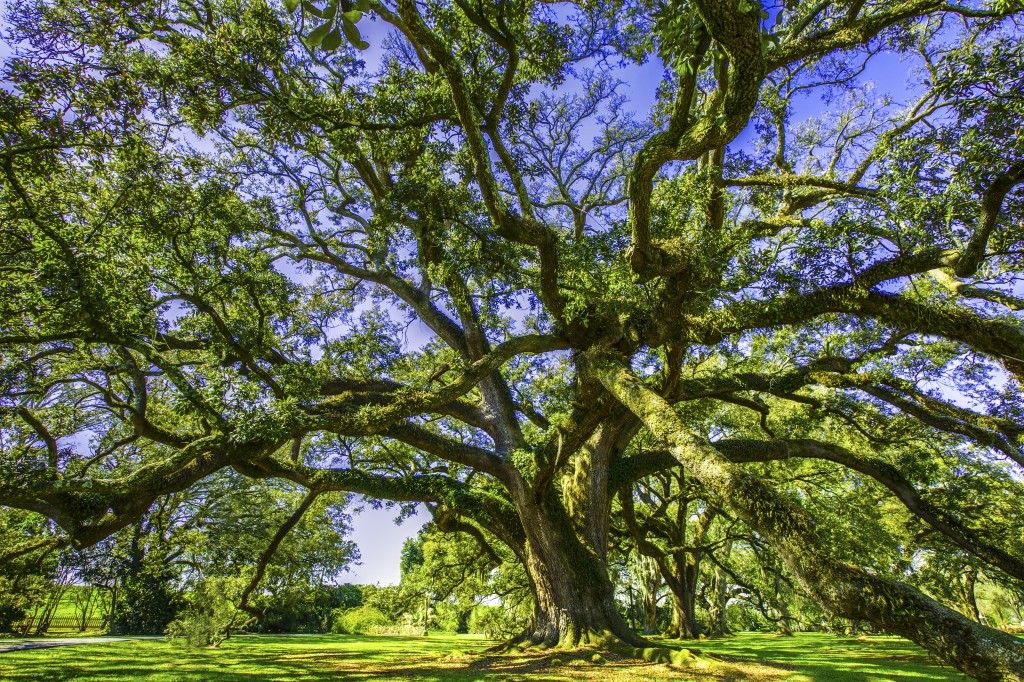 Houmas House is also home to a Japanese Garden, beautiful B&B cottages and of course the mansion. Not having as much time as we would have liked, we didn’t visit the mansion on this trip but will definitely do so next time.

It’s a big drive to Jacksonville, Florida so we’ve decided to break the journey in Lillian, Alabama – what is often referred to as Pensacola West, though not in Florida. We’re maybe 15 minutes from the border, losing another hour of our lives and hopefully some sunshine.

Right now, the mood is somber. For those of you – and there are many – who think Nicole and I are essentially on holiday for 10 months driving around the country and having a wonderful time, I really need you to reevaluate that. Running a tour like this is hard work, it’s expensive and it’s stressful.

Especially when our RV provider will not release information about the service history of our vehicle. All those concerns from a few weeks ago are reaching a boiling point and we’ve decided to break from our RV provider and find an alternate RV company to work with.

Also, please keep in mind the tour can only run if people attend our workshops.

Trust me, they WANT to come to our workshops. Even other photographers and workshop instructors love our workshops. If you are interested in photography or just want to take better photographs and we haven’t visited your city yet, join us for a workshop! You can even join us if we have been to your city and you just want to see us again. If you have friends in other cities, please tell them about us. Remember the code WEEKEND60 gets you 60% off – this week we’re in Jacksonville, FL, next week is Atlanta, GA, then we’re in Birmingham, AL and Jackson, MISS before heading west to Texas!

Also, feel free to contact us if you have a possible solution to our RV dilemma. We’ll let you know how Florida goes – it can only get better, right? 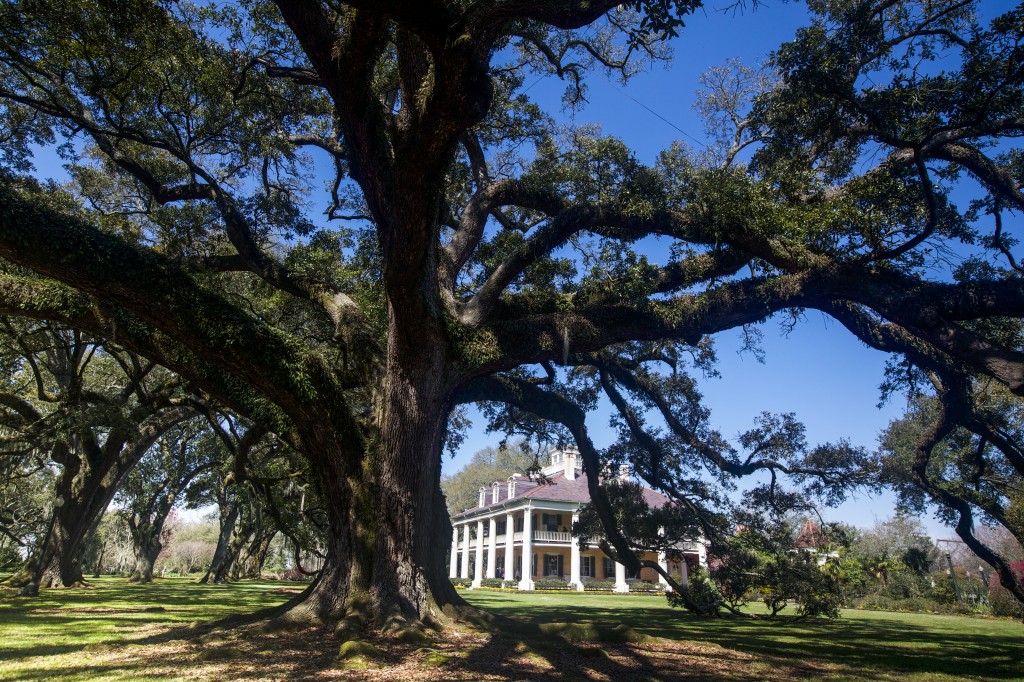 ABOUT THE AUTHOR: Luke Ballard is the owner and managing photographer at Remember Forever. A travel and portrait photographer for over twenty years, Ballard developed a curriculum of modules to help people become better photographers which later evolved into the Remember Forever system, now available in ten cities around the United States and Australia.
In 2014, Luke and his wife Nicole are exploring America in an RV stopping only to stock up on snacks, take photographs and teach some photography workshops around the country. He will send us regular updates on his cross-country trip. Stay tuned for more of his adventures and photo tips from the road!