The Nevada portion of US Route 50 has been coined “the loneliest road in America” by Life magazine back in the mid 80’s. This stretch was the original route for the Pony Express before it was named State Route 2 before finally becoming part of the US highway system.

With the 50 Faces on US 50 project, my intention is to travel and photograph the Nevada portion of US 50 in its entirety during one of the coldest times of the year. The Nevada section of this highway is roughly 450 miles long and encompasses widely diverse terrain ranging from historical sites, alpine forests, desert valleys, ghost towns, and The Great Basin National Park.

I will capture 50 Faces on US 50. This project will aim to get a closer look and feel for the people who inhabit the small towns that scarcely populate this long and vast route. The images will tell a visual tale of the residents who live hundreds of miles apart from one another and the vast landscape that envelopes these small towns and communities. This series will be my take on small town life within the vastness and greatness of Northern Nevada.

It was a snowy and cold departure from Ely, Nevada this morning as I trekked further due west on US 50.

As I traversed through two major mountain passes, the weather fluctuated accordingly changing from blizzard-like snowy conditions to blue skies and dry earth. However drastic and sudden the changes, I welcomed them as they made me appreciate the brief moments of sunshine and clarity. Once I arrived in Eureka, I settled in and immediately resumed my focus in meeting new and interesting subjects at the Owl Club Bar and Steakhouse. David likes the San Fransisco 49ers. He also enjoys dressing as a woman and taking selfies. David had quite as archive of imagery supporting this on his phone. He considers cross dressing a hobby. LaErin is a waitress at the Owl Club. She was born and raised in Eureka and has been working here for the last 9 years. 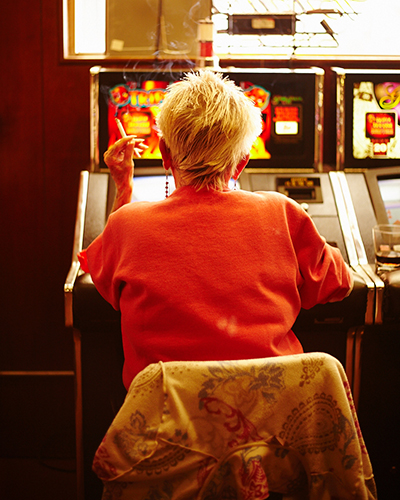 Carol sat in this chair over the course of several hours. She alternated between smoking and using her oxygen tank all the while playing poker on the slot machine.

Words and Photos by Yvonne Albinowski. Used with permission from the artist. See Episode One here.