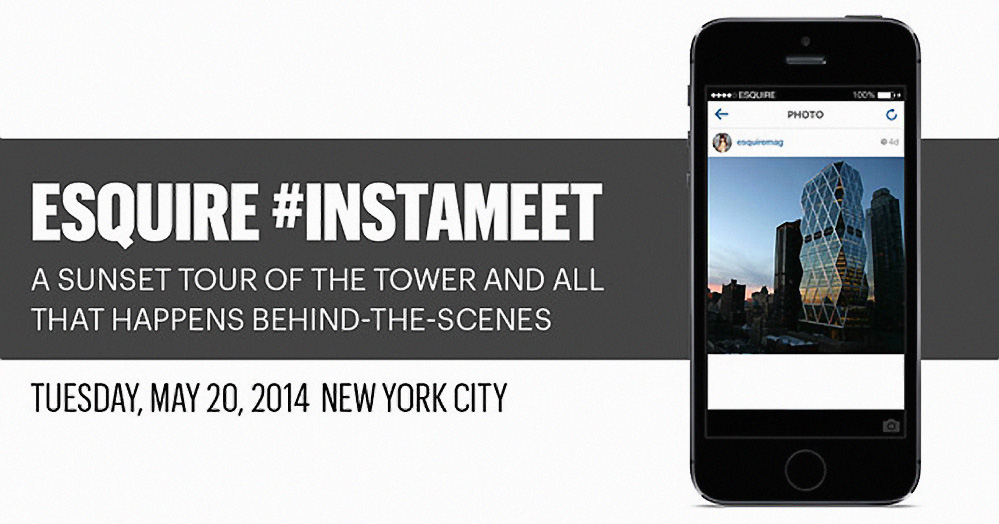 #ESQInstaMeet – Esquire Invites Instagrammers To Hearst HQ For A Shootout

Esquire held its first-ever #ESQInstaMeet on May 20, an invitational event for Instagram users chosen by Director of Photography Michael Norseng and Esquire.com Photo Editor Elizabeth Griffin. The event—which featured about fifteen users snapping photos, exchanging handles and sharing their viewpoints on cat photos and food porn—included an exclusive tour of the iconic Hearst Tower, from the Marie Claire photo studios to the skyline view from the forty-fourth floor.

The purpose of the #ESQInstaMeet is for users to connect in person, helping to build both one’s personal following and create a sense of community in the Instagram world. But for Esquire, the event also gave its employees the chance to meet with potential photographers while giving the Instagramers the opportunity to photograph a unique area. Although some would argue that the digital age has tarnished the photography industry (because anyone can do it now, right?), Esquire is attempting to embrace this technological evolution in a way that’s beneficial to both the publication and the platform users.

The tour began with a look into Esquire’s fashion closet, followed by a behind the scenes view of the Marie Claire studio where @kat_in_nyc was captured posing elegantly in the company’s largest make-up room. After a brief stop in Hearst’s television control center, the tour trickled down to the third floor lobby where the attendees we’re able to photograph anything they pleased.

The lobby, which is home to two art galleries, a theatre and a waterfall filled with recycled rainwater used to heat the building, provided space for some fantastic photos, from group rides down the escalator to shots of the pillars that support the forty-four story tower. While attendees were snapping away, former CNN editor and Instagram Communications Manager Tyson Wheatley, who has over half a million followers as @twheat, revealed the ideas behind his brand new Instagram-based company to Resource.

“There’s a lot of brands who are using [Instagram] well and there’s others who want to know how to be successful on [this platform],” he said. “So what I want to do is help these brands have success in variety of ways: how to grow their Instagram followers, how to get connected to influences and amazing photographers and videographers, and how to run a successful advertising campaign.”

Wheatley is essentially creating an advertising agency that focuses on building companies’ Instagram influence while depleting the gap between unpaid photographers, content creators and brands. It would create a “happy marriage” in a “Wild Wild West” market, according to the self-described mobile photographer, as he believes billboard and Instagram content should work synonymously. To him, this is the ultimate win-win strategy for both parties, however he was not the only one of the crowd that has found Instagram beneficial from a business angle.

Eric Petschek, an attendee of the InstaMeet known as @CB and a young Manhattan-based designer, has recently started his brand called City Boy Country Girl, which is an aspiring guide for designed experience in New York and abroad. While he is strictly an “Iphoneographer” as he puts it, Instagram functions as his main platform for his company. Although his brand has not yet caught up the some six thousand followers linked to his personal account, even Elizabeth Griffin told Resource that, “[Petschek] is one of [her] personal favorite Instagramers.”

Toward the end of the tour, the attendees were brought to the Good Housekeeping Research Institute and greeted with champagne, before relocating to Hearst’s personal art collection that includes artwork from the likes of Robert Rauschenberg and Helen Levitt. Finally, the Instagramers moved to the final stop of the tour, where they photographed the evening skyline from the top floor of the building.

“Thank you all again for coming, you’re all free to come back anytime you want,” said Griffin with smile,  as everyone gathered around a table for one final toast.