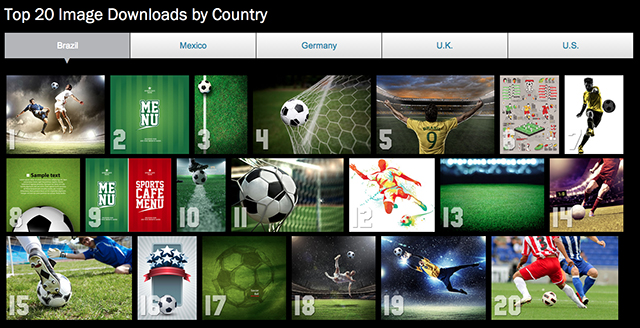 Since June 12, the world has succumbed to World Cup fever; the United States alone has seen record number of viewers, with 24.7 million people tuning into USA’s game against Portugal. And that number is only likely to rise as the tournament builds towards its inevitable conclusion on July 13. It is safe to say that soccer, which was already the world’s biggest sport, has grown considerably since 2010; it was estimated that nearly half the world’s population, 3.2 billion people, watched the last world cup. While the public will not know if 2014s event will match 2010s milestone, early indications show that it could surpass that number.

And this soccer fever has bled over into different mediums; Shutterstock, the stock photography agency that was founded in 2003, are reporting an increase in soccer photography, as well as, purchases. In the year leading up to the World Cup, Shutterstock claims that their collection of soccer clips grew by ninety-two percent, with 53,903 images added in the last year: which reveals an astounding average of 148 images per day.

Furthermore, the amount of total downloads has risen an astounding ninety-one percent from 2013 to 2014: the first two months of 2014 alone saw over 156,000 photos downloaded and this is not even the most interesting number. Shutterstock broke down the amount of downloads by country and according to their numbers, Brazil averages an unprecedented over nineteen licensed soccer images per customer: even the United States averages over four images per customer.

Shutterstock’s numbers clearly indicate that the already gargantuan soccer influence continues to expand and it does not show any indication of stopping: which means as the influence of this sport grows, the demand for soccer photography and related content will grow. And with 2014s record breaking numbers, only time will tell how big soccer could get by 2018, which is set to take place in Russia.