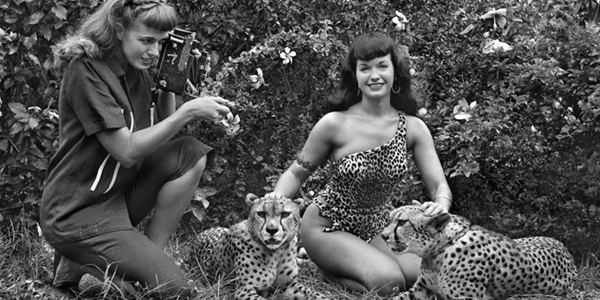 Bunny Yeager: The Photographer Who Immortalized a ’50s Sex Goddess

Buried in the era of lustrous pinup centerfolds and the birth of Playboy Magazine in the 1950’s, was an endearing and fascinating partnership between two women: Bunny and Bettie. Transcending outside the glossy pages of the magazines where the radiant moments of Bettie Page was immortalized by Bunny Yeager, their working relationship exalted a 50’s sex goddess who up to this day remains relevant.

Bunny Yeager, who died of congestive heart failure on May 25, 2014 started her career in front of the camera as a bosomy and long legged blonde model. Glowing with her trademark smile and long cascading golden locks of hair, she found a lot of work as a cheesecake model in the late 1940’s in Miami. She personified the kind of aura Marilyn Monroe would later introduce to a wider audience.

Being a model however was not the one that embodied her passion. Working behind the camera allowed Bunny to express her creativity; she found her calling taking photographs of other women, most of them in their birthday suit. After she finished a night time photography course in 1953, the photography world became abuzz when a dashing young man from Chicago named Hugh Hefner started presenting the artistic depiction of naked women to mainstream America. He started Playboy’s first issue with a Marilyn Monroe centerfold. To Bunny’s career shift, the timing cannot be more perfect, because at around the same time, a young unemployed actress named Bettie Page was ready for her own glamour feature.

The art of erotic photography was still at its infancy stages when Bunny and Bettie took it upon themselves to popularize it from being a taboo and stamping an art label to it, which spread to the consciousness of the mainstream crowd. Though the names of Bunny and Bettie became associated with each other throughout their careers, Bunny found other photography gigs that further advanced her career. “They all wanted to model for me because they knew that I wouldn’t take advantage of them,” Bunny told The Associated Press during a 2013 interview. “And I wouldn’t push them to do nude if they didn’t want to do nudes. It wasn’t a day when nude photography was prevalent.” Another famous photograph of Yeager was that of Ursula Andress, the Swedish actress who appeared alongside Sean Connery in the 1962 James Bond film “Dr. No”, wearing a white bikini with a wrapped knife at her side.

Bond girl Ursula Andress from the set of Dr. No 1962 © Bunny Yeager

For Bettie Page, the peak of her career intersected with her association with Bunny Yeager. In 1957, Bettie was invited by the FBI to give “expert guidance” regarding the agency’s investigation in the production of “flagellation and bondage pictures” in a raided apartment in Harlem, New York. A few years after, Bettie completely disappeared from the modelling world, leaving only a mystery as to why. Some people close to her explains her conversion to Christianity was the main reason why she chose to live a quiet life and eventually settled in Key West, Florida starting in 1959. In the 1960’s she married, divorced, re-married and divorced Billy Neal, worked full time for Reverend Billy Graham before marrying her second husband Harry Lear in 1967, whom she divorced in 1972.

In a 1998 Playboy interview, Bettie remarked on her career “I never thought it was shameful. I felt normal. It’s just that it was much better than pounding a typewriter eight hours a day, which gets monotonous”. Bettie Page, the “Queen of Pinups” died of complications from Pneumonia in December 11, 2008.

Toward the later life of Bunny Yeager, she remained active in the art scene but barely producing the kind of work that catapulted both her and Bettie in the 1950’s. The most time she went back to the spotlight was in 2010 when the Warhol Museum held a photo exhibition based on Yeager’s book “How I Photographed Myself” which was first published in 1964.