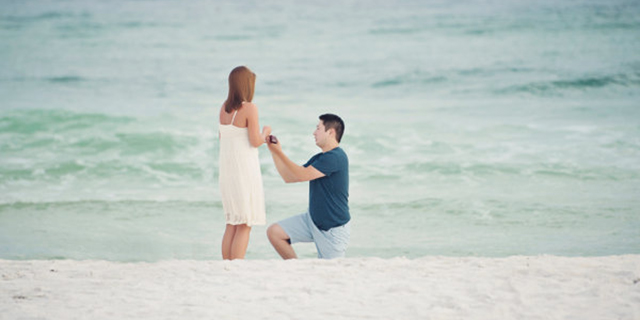 “So, as I was shooting my last session on the beach, we noticed the sweetest couple getting engaged just down the beach from where we were shooting. I shot a few pictures of them but then realized that they had family hiding behind the dunes with cameras, so I moved on and finished my shoot quickly before it started raining. Now, as I am going through the proofs, I wish I’d gotten their contact info so that I could send them the pictures. If you happen to know this couple (they got engaged in Seaside, FL last Friday night), please pass my info along to them so that I can send them their pictures!” – Photographer Heather Swanner’s Facebook Post.

And, after that Swanner did find out the mystery couple whose marriage proposal on a Florida beach she stumbled over.  Having realized that the images were so beautiful and the much in love couple’s proposal in such an amazing setting could only do justice to the moment if it were to reach those that really made the photographs so special. With a quest that was tough but not impossible, the ace photographer posted these images on Facebook and asked her followers to help find them. What followed was that the post got 548 likes and 380 shares to finally reach the couple in Knoxville, Tennessee within two days of the pictures getting posted.

Swanner loved the pictures and wished to get in contact with those she photographed. It was in a sudden hurry that she forgot to get their contact information so that she could send these images to them. But, that mystery took some hours to get resolved as Swanner found out who the cute couple were. It was on May 30 when she saw (now known) Tae Chao 28, drop to one knee and propose to his 23-year-old girlfriend Lindsey Couch. The couples’ family was hiding nearby, but no one could get close enough to click a proper picture as they did not want to ruin the surprise.

The couple was ecstatic when a friend on the social network found out these pictures and told them that they existed. The couple had seen Swanner take those pictures but was unable to talk to her in all the excitement of the moment. “I can’t believe you captured this!! My family was hiding but was too far away to get good pictures!!!!!!” Crouch wrote on Swanner’s post. “I am literally in tears seeing the most beautiful and special moment of my life caught so beautifully on camera!!!!!!!! Thank you thank you thank you!!!!!!!! I am so blessed!!!!!!!”

“When we realized we didn’t get any good pictures we were bummed, but at that point there is not much you can do,”

Swanner was happy to find that the couple was thrilled to get such good pictures and couldn’t believe that they actually got these great images when they were disappointed not to have a better click.

“Thank you all so, so much for your help with this! The power of social media never ceases to amaze me,” Swanner posted on her Facebook page.