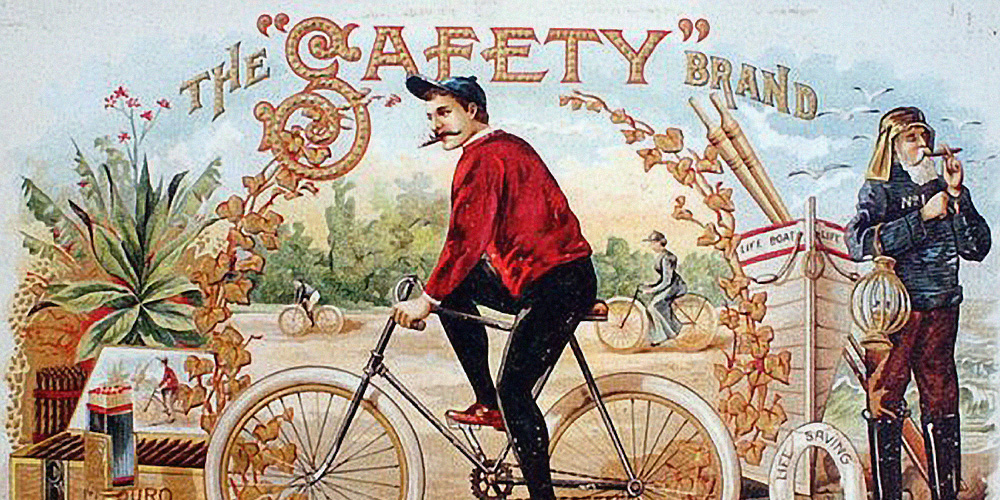 A Photographic History of Bicycles

Staying in theme with our Spring 2014 issue we decided to give you a little background on that 2-wheeled contraption you ride around on day-to-day we scoured the internet to find some classic images and give a brief photographic history of bicycles. Although the wheel has been around since the 4th millennium BC, the invention of the bicycle didn’t occur until 1817, when a man named Baron von Drais created what he called a “Walking Machine.” The device was used mainly for speedier transportation through parks and gardens, but failed to be useful in any other venue.

Almost fifty years later, a new development of the bicycle came in the form of the “Velocipede,” meaning “fast foot.” This model featured a set of pedals on the front wheel, an addition that made bicycle travel much faster than before. This version was also popularly known as the “Bone Crusher” because it was so uncomfortable to ride.

A newer, smoother ride came soon after with the introduction of the “High Wheel” bicycle. Made entirely from a light metal, the High Wheel provided the rider with a much more comfortable experience. Unfortunately the new model also came with a higher price tag, and only the wealthier gentlemen could afford to ride it.

In the late 1800s there weren’t many biking options for women because they were restricted to the long, heavy skirts of the time. As a result, ladies rode something called a “High Wheel Tricycle,” which consisted of two large back wheels and one smaller front wheel. The structural difference of the High Wheel Tricycle compared to the regular High Wheel provided a much safer ride because of it’s closer proximity to the ground.

Because the High Wheel had so many safety issues, a new model called the “High Wheel Safety” was developed in an attempt to eliminate frequent bicycle injuries. By simply removing the small wheel from the back of the bike and placing it in the front, manufacturers eliminated the problem of bikers falling over the front of the bicycle if something got in the way of their wheel.

Before the end of the nineteenth century bicyclists saw the popular High Wheel model exchanged for a new but familiar looking model. Reminiscent of the Velocipede, the “Hard Tired Safety” is built on two of the same sized wheels and comes equipped with a chain and the option to regulate speed through gears.

Although then the most practical, the Hard Tired Safety was not the most comfortable bicycle. Before the end of the 1890s people saw a greater improvement in the design of bicycles with the “Pneumatic-Tired Safety.” By increasing the width of the tires, manufacturers made riding much smoother and more balanced.

After the introduction of the Pneumatic-Tired Safety, the “look” of bicycles has remained about the same, despite some small structural tweaks. Different kinds of specialty bikes have been created, like the mountain bike, BMX bikes, and motorized bikes, but the basic form has persisted since the start of the twentieth century.