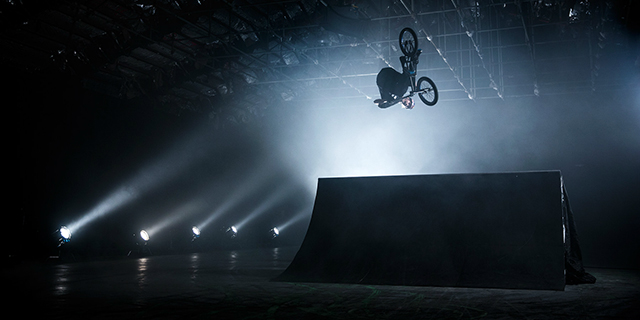 The world of BMX photography is a nitty and gritty one and demands photographers with sharp eyes, quick reflexes and the cameras to match. Events, like the ones sponsored by Red Bull, are the perfect platform for these talented togs to capture the high flying sport. Those who specialize in photographing this extreme sport have their own perspectives and insight, and of course, they all have unique stories to tell about their experiences.

Graeme Murray and Rutger Pauw are two of the top names in BMX photography and have extensive experience in the “trenches.” Resource reached out to them to find out a little more about what they do, how they do it and how shooting extreme sports has made them into the photographers they are today.

Describe the environment that you work in when you are on a BMX shoot. What is it like? Are there other photographers and, if so, does it become a competition?

Graeme Murray: If a BMX shoot is just with one or two riders, it’s a great relaxed time. I also look for the optimum moment and the best style. I talk with the riders about how they want to be shown in a photo. The riders know the sport better than photographers–they know the feeling of doing the tricks and jumps so I want to hear about that to put it into the images. If I have to shoot when other photographers are around, I just do my own thing. If you worry about what other people are doing, it means you are not putting all your thought and energy it to your own imagery.

Rutger Pauw: There are roughly two kinds of BMX photography: first there is contest photography where the venue is set, and then there are individual shoots. These often take place in the streets, and as time went by and the level of riding went up, so did the photography. We are now in search of never-before-seen locations that might be suitable for bike riding, and it makes photographers venture all over the Earth. Sometimes the shooting conditions can be harsh, like on a trip to Argentina where the air was so thin because of the altitude, which made it hard to breathe and the sun almost blinding to the eyes. However, places like that make for great images.

BMX is not that big a sport, so usually I’ll know the other photographers if I’m at a contest, and the atmosphere couldn’t really be any better. We share knowledge about photography among each other and help out where needed. Most trips that are to specific destinations will only have one photographer, because of the exclusive element. Finding a location and keeping it a secret until a magazine goes to print are all part of it.
Is there a specific style of BMX riding that you tend to gravitate toward or specialize in (i.e. Downhill, Freeride, Urban etc)?
GM: To be honest I like shooting all types of sports. I like see the dynamics in sport, the lifestyles… It’s fascinating.
RP: I have to say I like to take photos of all disciplines, but with my background in BMX street I’d say that sport will always be fun. It also allows for creative photography, as I can alter background more easily than with other disciplines.

What kind of equipment do you use for BMX shoots?

GM: I mainly use a DSLR camera, and if I am using lighting I use Elinchrom flash lighting gear. I trigger the flashes with Pocket wizards. I still have my Hasselblad Medium Format film gear that I like to use every now and then. You could make a cool shot with an iPhone if you really wanted to.

RP: I use the Leica S-System with central shutter lenses. They synchronize with flash up to a 1000th of a second, so that helps me freez the action during the day. I use a Broncolor Move to light everything. It accepts all the light-shaping tools you’d use in the studio, but it’s still very portable. I don’t work with assistants, so I like things to be somewhat light.

When did you decide to pursue this type of photography? How has it shaped your craft?

GM:  I shoot all sorts or sport and do commercial work also not just BMX. I love shooting sports with wheels a lot as I have always been on a bike myself, having raced mountain bikes for a long time–I still spend many hours riding on the trails in my hometown.

RP: Basically it chose me. I’ve been riding BMX for fifteen years, so it came naturally. Though I love doing the occasional BMX shoot, most of my shoots are with other sports, and I’m happy about that, as I enjoy that variety–it pushes me out of my comfort zone. After art school I assisted a good photographer for a few years and then decided to just go for it. That’s seven years ago now. It’s been a fun ride so far.


What is your favorite part about BMX photography? And your least favorite?

GM: Seeing amazing things happen on a bike is very cool, like new tricks. I like seeing people do rad things. Sometimes cool moments happen that you would have never even planned on. Least favorite? Shooting someone who gives up quickly but still wants to get cool imagery is tough. You spend money going to try get cool shots and come away with not much. I suppose that’s all part of it though with sport: sometimes its does not always go as planned.

RP: My favorite part is the travelling, the friends, the laughs, the fear of a crash and the creativity. Pretty much everything about it. Because I don’t get to shoot BMX all that often, there is no boredom with it, which is the only possible negative I can think of. Luckily I’m avoiding that; it’s a party every time I get to go out with some talented people.

Is there any kind of relationship between photographer and rider?  If so, describe what it is like.

GM: You need to get on with the rider. They need to trust you. They want to see that you are getting amazing pics. It takes a lot of effort from them to do what they do. They want to see results from you too. Once you have their trust, the athletes will push themselves so you can get cool pics.

RP: In freestyle sports we work pretty close with the athletes. Style (or body position) is an important aspect of the photo; sometimes a shot will be perfectly timed, but the athlete has an awkward body position. I always look at the photo together with the athlete and we’ll keep shooting until they are happy with the result. So aesthetics matter a great deal. Often athletes prefer to work with photographers they feel comfortable with, especially if it’s for projects that have a high risk of injury–in that case they don’t want a photographer who’ll ask for “one more time please.”

Do you have any anecdotes from past photo shoots?

GM: The biggest phrase photographers tend to say is “Just one more.” You tell yourself not to say it, because sometimes when you do something bad happens to the rider attempting the trick, like a crash. I had that happen a few months ago. Before I had realized, I said “just one mor”’ to the rider. He went huge on a wall ride , I got the shot but he ended up hurting his ankle a lot, which put him out of action for a couple of months. I felt bad, but I always ask the athlete to tell me when they have had enough or don’t want to do something.


RP: One of my most noticeable shoots was probably a skateboard project on Sealand. It’s a fortress built 6 miles off the coast of Harwhich, UK, during the battle of Britain, and it was deserted afterward. During the days of radio piracy it got taken over by Roy Bates and his merry men and he crowned himself prince. Sealand is now a principality, and has seen a hostile takeover by a dutch/German crew, only to be taken back on Christmas eve by Prince Bates in a helicopter. The crew still holds the fortress with all means available to defend it, so it was an adventure going there. We built ramps on Sealand that blended in with the environment and shot from a helicopter the first day.

The second day we went out on a rib and were told that with a flat sea the travel time to the fortress could be under ten minutes. Needless to say, it wasn’t flat at all–five foot waves were all over the place–and because we were driving out, it meant shooting up the wave, get airborne and land flat behind it. My camera bag was in the front of the boat on the floor and after every wave it went up in the air a little bit, only to get smashed into the floor on every landing. There was no way I could secure it, because we were hanging on to the boat with all fours. After an hour and a half we arrived, got hoisted up with the entire rib boat, and I fully expected my equipment to be destroyed. To my surprise, it was absolutely unscathed and I could get to work. Because of an upcoming storm that could have us stranded there for a week we had to cut that shoot short to just two hours, so we were running around on a 54-foot platform, trying to shoot everything we had in mind. The photos came out nice and it was definitely an adventure I’ll never forget.
What are some of the most important things to keep in mind when taking photos at BMX events?
GM: It’s important to deliver the correct images to clients if that is what you are there to do. It’s not always about shooting one jump all day: there is a lot to do–portraits , lifestyle, action, wide venue shots, crowds shots… the list goes on. Action is still very important–getting the best moments, the best tricks–but you also need to show how awesome the event is. It becomes a busy day.
RP: Watch very carefully where you walk or stand. It’s very easy to get hurt if you stand in the wrong place. It’s better to ask than lose a camera or even get hurt. Most of all, have fun–people pick up on that and will want to work with you.

GM: Just shoot a lot. Get out and practice, meet athletes and get their trust. Push the limits of creativity. Refine your skill, just like athletes refine theirs. Have fun, then results will follow.

RP: Don’t shoot in burst mode. Learn to recognize the correct timing of a shot and be conscious about what moment you want to show in a photo. Of course, assisting a good photographer helps with learning about light and the practicalities of the job too. Furthermore, I find that if you are genuinely having fun at the job, then that’ll get noticed and people will want to work with you.