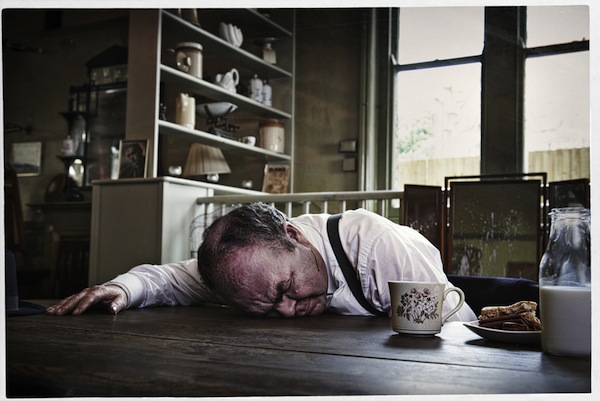 A Quest for Weegee: Scott Grummett’s Scene Of The Crime

Scott Grummett, a London-based photographer, has made a career out of beautifully photographing food and various inanimate objects. But recently the artist has decided to pursue a personal project: recreating seemingly grotesque crime scenes from the 1920s through the 1940s. These old crime scene photos of yesteryear always found a way to force the viewer to feel empathy for the victims.

The Scene of the Crime project originally aimed to recreate this empathetic feeling, but it also attempted to convey that beauty exists even in the darkest corners of human existence. Resource Magazine sat down with Grummett to find out more about him and his latest project.

For our readers who do not know, give them a little insight to your photography experience, including how long you have been in the industry?

I am a food and still life photographer and director, mostly. I have been shooting in London for about four years, mainly doing food, blowing things up and putting things into fire and ice for people like Wired Magazine. There are worst ways to earn a living.

Can you please explain the idea behind Scene of the Crime? Where did it come from? What artists served as inspiration for your project?

It basically comes from crime scene photography. From people like Weegee, who used to work for the police—going into crime scenes like robberies, murders and so on—to document them, or people like Weegee who had police radios and got to the scene first so they could sell prints to newspapers. Loads of these images came out through New York’s archive; I decided to do this project—not as homage, but taking inspiration from it and re-creating those types of scenes.

Did you go to the NYPD Municipal Archive with an idea of what you wanted to do? Or did it manifest itself throughout searching the files?

It manifested from the research. It is quite rare that you see an image that suddenly gives you a bit of a buzz. To find images, which are quite horrible, yet kind of beautiful, really excited me for some reason—it got the cogs working in my mind.

Did some of the photos you observe contain case files too? If so, did that affect your recreations or did you only do visual research?

Some have bits of story, while some had markings on the negatives: times and date or short description, like ‘hammer blow to the head,’ or something like that. There were small descriptions, but largely you got left to put the pieces together in your own mind.

Not many people would use crime scenes for creative expression: why choose what some people would deem to be morbid? Was it for the shock value or did these photos express more?

I do not really like shock value at all; I do not really like horror films or anything that is gratuitously disgusting. I always liked thrillers or things that get your mind going, rather than the gore and so on. To see these images and realize that they were kind of horrifying, yet moving in a way, as opposed to just disgusting, I guess is what inspired me and what got me excited.

I do have to say that these older crime photos always contained a feeling that they were staged: but did you feel this look manipulates the viewer into feeling empathy for the victim? Or is this emotion just innate to viewing another human in a vulnerable state?

As soon as you point a camera at something it becomes contrived. Even if you are going into a real crime scene, by framing certain things in and out of the shot, you’re changing a perspective of how it should be perceived… I purposely tried to put things in there that made you feel empathy and made you feel like it was someone that you could associate with in your daily life.

These photos were designed to capture every detail about a specific crime, but every person’s observations are subjective; while some of the crimes are more obvious than others, did you intend for people to have their own interpretation of your photos?

It was always for someone to kind of put what they think happened together. I did not want to lead anyone too much, but I wanted them to be like, ‘what if someone was behind there or came through here?’ The ‘couple shot’ has little clues; there is a ring in there that you do not know if it is their ring and they had an argument, or if someone has come in. It is more about someone asking that question, than me telling them what it is.

Why did you choose to shoot in color, rather than black and white?

The photos were all in black and white originally. I put things in black and white and cropped it in an attempt to make it feel like old movies, but the colored photos seemed to have something extra. I always wanted black and white, but I actually painted color back in—in a picture postcard way. I don’t know why I went for color, but it seemed to make it less obviously trying to be of the period: I do not like anything that is retro or vintage. Being in color meant you can more associate it with your life: it could be now or it could be a hundred years ago.

How were you able to create sets that were very reminiscent of your intended time frame?

I shot in an amazing pub in South London called the Balham Bowls Club, which is a group of pubs. There is one I go to near where I live, which is an old conservative club—it has an old picture of the Queen and that type of thing. The Bowls Club was reopened with a lot of the same furnishing that it had when it was closed down forty years ago. It’s just kind of left, instead of someone styling it, to be of the time so it was perfect. All the sets were in different parts of the pub—there is a dance hall and a bar—it’s all in that one place. It was just the perfect location to set up house and do it all in one day.

What does the future have in store for Scott Grummett?

It terms of personal projects, I am going to do something on cosplayers and larpers. Just something really nice about these middle aged guys who dress up in suits of armor on their weekend. As a Brit we love that kind of quirkiness.

All photos © Scott Grummett and used with permission from the artist.