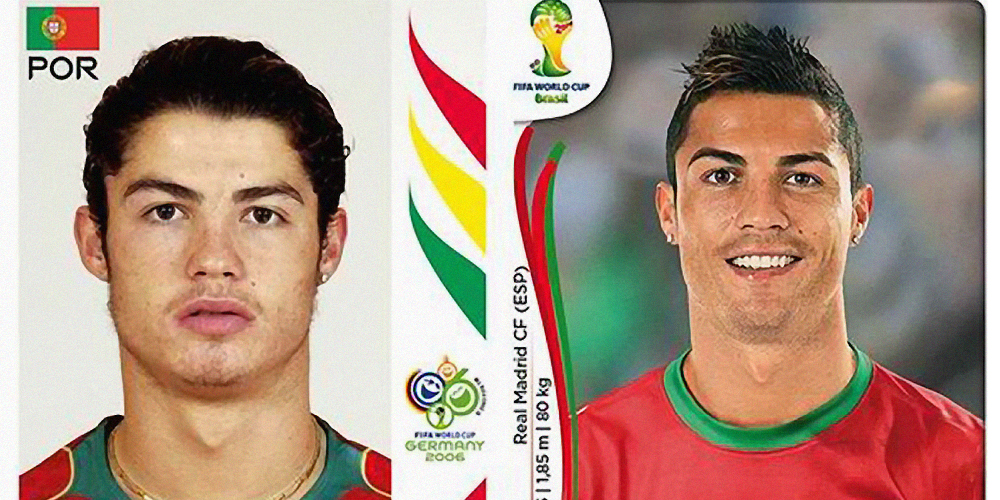 World Cup Stars – Then and Now

World Cup fever is back in high gear and with stadiums across Brazil being filled with jubilant crowd, the hype reaches ultimate heights as billions of people from all over the world watches their countrymen and World Cup stars slug it out on the field. The center of attention shifts to the talented individuals who have made it big in both professional and international competitions, most of whom have become prominent fixtures in advertising and are the current face of the world’s most popular game.

From Cristiano Ronaldo’s amazing transformation to the reverse aging of Samuel Eto’o to Wayne Rooney’s pre hair transplants, we take a look back at how our favorite football players have aged gracefully and not so gracefully over the years.

Let’s kick it off with one of the fiercest strikers in the history of the game, a daredevil on the field but a gentleman outside of it.

Wayne Rooney‘s career goals is not a representation of his declining hairline from his younger days. He remains still as one of the game’s best scorers to this day.

World Cup defending champs Spain boasts of a whirlwind spike-haired midfielder Xavi Hernandez, who retains his youthful look but with a thicker and scruffier facial hair.

Italy’s Andrea Pirlo represent a younger and bearded version of Alan Rickman’s Professor Severus Snape in the Harry Potter film series.  No wonder he can dish out some magical plays on the field.

When he was younger, USA’s Clint Dempsey sported a Foo Fighter’s Dave Grohl long locks until years of grinding out on the football field morphed his features into a neater look with a Barrack Obama-hairdo.

Samuel Eto’o of Cameroon seems to embrace the pressure packed nature of competitive football as he doesn’t show any aging. In fact, he seems to look younger as he gets more playing experience.

Cristiano Ronaldo of Portugal have reached Beckham-like popularity especially for the women fans of football. A younger version of Ronaldo might have a little difficulty wooing current girlfriend Irina Shayk.

Frank Lampard of England looks like any other rookie early in his career. A hundred or so matches later, he now jolts with an angry Liam Neeson’s swagger from Taken.

Philip Lahm maybe one of the most exciting players on the Germans roster, but his transformation was steady at best. GQ cover image mode on.

Michael Essien of Ghana exemplifies another reverse-aging personality. A more intense in his earlier career, a more relax but still competitive player of today.

Landon Donovan of USA looks like a boy next door character from a teen movie genre like American Pie but lately he has morphed into a more serious role of a leader of his country’s national team.

Uruguay’s Diego Forlan still sports that disheveled hair with a viking like persona which is the kind of attitude he brings to the game.  Today, Diego possess a  less menacing Game of Thrones “I’m watching you” kind of look.

Before he became one of the most feared goal-scorers in the sport, Argentina’s Lionel Messi embodies a young Luke Skywalker learning the ropes of being a football superstar, which he eventually become not long after.

France’s Patrice Evra carried on his serious demeanor from his rookie year. It definitely shows with his attitude towards each match he’s played in.

From a rugged, mopped hair to clean cut intense look is what Italy’s Gianluigi Buffon‘s lengthy and colorful football career have taken him.

Côte d’Ivoire always stays in close competition with other nations so long as they get their opponents locked up under the watchful eyes of Didier Drogba who has exhibited such intense in-match attitude from the get-go. There’s no truth to the rumor he is being cast in the next season of GOT.

Gone maybe the wavy hair, clean cut Arjen Robben of Netherlands still retains that friendly smile that often fools opponents into thinking he is soft in the field.

A little forgetfulness in the shaving department is what brought the only change in Spain’s Andres Iniesta‘s appearance through the years.

Look closely and if you see any hints of aging at Argentina’s Javier Zanetti‘s face, then you end up with a mighty pat on the back from us.

Netherland’s Robin Van Persie still carries that youthful promise into his tenured international career and as a key player of Manchester United.

Saving up hundreds of goals from the vicious kick and head strikes of opponents have made Spain’s Iker Casillas look the part of a veteran savvy footballer compared to his fresh-out-of-school look he had when he came into professional play.

Here are just some of your favorite footballers then and now. They may have changed looks through the years but one thing is certain, they all have carved an illustrious career playing for big clubs all over the world at the same time raising their country’s flags and pride in every World Cup event.

All Photos courtesy of Panini Stickers