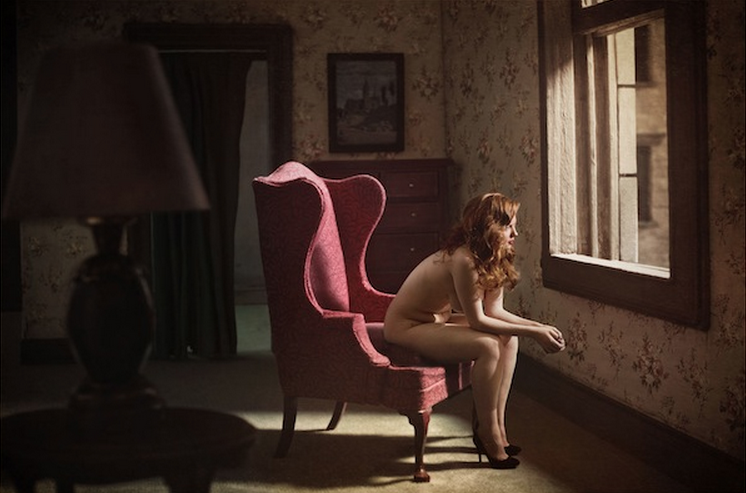 Richard Tuschman’s latest series, entitled Hopper Meditations, is reminiscent of Edward Hopper’s paintings. He built and photographed mini-sets then shot the models separately. Tuschman then used Photoshop to manipulate the images and create montages of models and the mini-sets to generate the final images. We sat down with Tuschman as he discussed his origins in photography, his inspiration behind Hopper Meditations and the process behind these amazing works of art.

First, can you tell us where your background in photography started? What initially piqued your interest and how did you take off from there? Any specific projects you worked on?

I suppose it started as a child looking at my parents’ and grandparents’ family photo albums. I have always been drawn to photographic images (who isn’t?), but I have never had traditional photographic training, and I do not possess traditional darkroom skills. Until relatively recently, I would refer to myself as “an artist who uses photography” rather than “photographer”, though now I am happy to use the label, “photographer”. When I went to art school at the University of Michigan back in the 1970’s, I studied mostly printmaking, though I did a lot of photo etching and photo lithography. I only took one darkroom course, and I was not very good at it. But I always incorporated photography into my work, through photo printmaking or collage. It was not until Photoshop was introduced in the 1990’s that I had a “darkroom” that I felt comfortable with. I had been using a Macintosh for several years at my graphic design job, so Photoshop came naturally to me, and seemed much more analogous to painting and printmaking (which was good for me) than a traditional darkroom. After that, my career in photo-illustration took off. I began seriously photographing live models several years ago for my book cover assignments.

In respect towards your newest series “Hopper Meditations”, what inspired you to use Edward Hopper as your main idea behind the series? What is it in Hopper and his work that you’re so creatively attracted to?

I have always been attracted to Hopper’s paintings for their use of light, humble settings and psychological resonance. Hopper was a master at using light to expressively illuminate his subject. I like the fact that almost all of his human subjects are contemplative. There is, for the most part, no action. This sense of quietude contributes to the open-ended quality of the narratives, and leaves room for significant emotional depth. The characters’ emotional states can seem to waver paradoxically between reverie and alienation, or perhaps between longing and resignation. I also liked that many of them seem to be set in New York City, which is my favorite city, and where I live.

I wanted to create a series of open-ended staged narrative photographs. I also wanted to create the sets myself in miniature form, and insert live human figures in Photoshop. I had done this previously for several commercial assignments and the possibilities intrigued me. I like the control this technique gives me over every aspect of the process, and I can do it all in my small studio. Hopper seemed like a good fit for this kind of work—a way to create a cohesive body of work inspired by an artist whose work strikes an emotional chord with me.

With each new series you’ve worked on, the more experimental you’ve gotten, such as your “Still Life” series, where you used natural tools and technological ones to blur the line of what an image could be. What inspired you to start experimenting? Which specific programs have you used and what kinds of techniques are your favorite to play around with?

Since I can remember I have wanted my works to be a marriage of painting and photography. I love the improvisational freedom, and the physical and tactile presence of paintings. On the other hand, I think photography is unsurpassed at describing and emphasizing the visual richness of our physical world. I think this is especially true where the image is expressively dependent on very delicate shadings of light. When I was in art school, as I had mentioned before, I blended the two media as best I could through photo etching and photo lithography. After art school, when I no longer had access to a print studio, I made a lot of painted collages, which directly mixed painting and photographs. But when Photoshop was introduced in 1990, it exponentially increased the possibilities. I started experimenting with version 1.0, and I have never looked back. It was, in many ways, an answer to my creative prayers, and literally transformed my life.

Right away, I loved that I could seamlessly blend scanned painted textures, personal photographs, and all manner of found scraps and printed materials, with complete control over opacity, contrast, and color.

For a long time I had been drawn to organic materials such as wood and oil paint for their primal physical presence. I had been working with these materials for many years before digital technology came along, so it felt only natural to incorporate them into my digital work. This is especially true in the “Still Life” series.

For the past twenty some years, I have had an ever expanding library of hand painted textures on my hard drive that I incorporate into my images. When I am compositing the scanned textures and photographs on the computer, the process in analogous to painting. Instead of applying layer upon layer of paint, I am continually re-working layers of images and textures, trying different opacities and blending strategies, dodging and burning, blurring, etc. I go back and forth a lot between Photoshop and Bridge, looking for the right texture. I make constant use of various blending modes, and I discovered early on that a touch sensitive stylus and tablet are essential to my process.

“Hopper Meditations” is so much more about than just the image itself – from the technical properties to the more creative tools, such as the painted dollhouse size dioramas, it’s truly fascinating how you blur the lines between photographer and designer. Could you tell us about the process behind this series, perhaps starting with the dollhouses and how you incorporated them into the series? Where did this entire idea come from?

When I first moved to New York after art school around 1980, one of my first jobs was working in an architectural supply store. The model building materials there inspired me to make a series of miniature painted stage set like box constructions. In these first dioramas, the tone of these was surreal, and a human presence was often suggested by collage or painted shadows, or sometimes an actual painted clay figure. I worked this way for most of the 1980’s.

The introduction of Photoshop in 1990 launched my (ongoing) career as a digital photo-
illustrator. Much of the earlier work made use of still life and table top photography. As I mentioned, I began seriously photographing live models several years ago for my book cover assignments. I think the idea of combining live models with the dioramas first occurred to me for a commercial assignment for the New York Times about five years ago. It was the only way I could think to pull off the image they were asking me to create. Fortunately, Photoshop gave the control I needed to convincingly blend the two worlds. There is simply no way I could have achieved the intricate masking and color/tonal matching without it. I have been using this method ever since.

Hopper places his figures in quiet, intimate settings and he seems to typically be portraying alienation and longing. Are you drawn to photography with psychologically compelling narratives and is that something you want to evoke with your own images?

Absolutely. While I like a “Hollywood ending” as much as the next person, real life is much more emotionally complicated, and I want my pictures to reflect that. Also, I do personally identify with the pensive, melancholy moods of Hopper’s images. In a way, they are very private pictures, and I think this is an especially relevant counterbalance given today’s environment of public personas in social media.

You’re work has been featured for clients such as The New York Times, Newsweek, and Sony. Was this a project that the media immediately picked up on? If so, why do you think people are attracted to this series?

First, let me clarify. My previous commercial work has been featured in projects for The New York Times, Newsweek, and Sony. The Hopper series has been widely covered on many culture and photography websites, but not in connection with any of those companies.

I do think the series struck a popular chord, primarily for the following reasons. As I hinted at in the answer to the previous question, I think the quiet mood of the pictures is a welcome respite from much of the verbal and visual chatter so prevalent in the electronic media today. It also helps that the main subjects are attractive women, but attractive in a more “human” light than they are often portrayed on the web. Additionally, and perhaps especially, Hopper is an extremely beloved artist around the world today, probably more so than ever before.

I have not taught this technique, partly for logistical reasons. I started the Hopper series about two and a half years ago, and I have not taught for the past four years. But besides that, the project is really tailor made for my particular individual skill set, acquired in various pursuits over the last thirty years. It developed organically from that, so it would be a challenge to teach. I do know artists who make dioramas as well or better than me, and I know other artists who are every bit as skilled in Photoshop as I am. I just happen to like doing both.

About The Artist – Richard Tuschman

Richard Tuschman is a photographer based in New York City. His clients include Adobe Systems, The New York Times, Penguin, Sony Music, Newsweek and Random House.

All photography © Richard Tuschman and used with permission from the artist