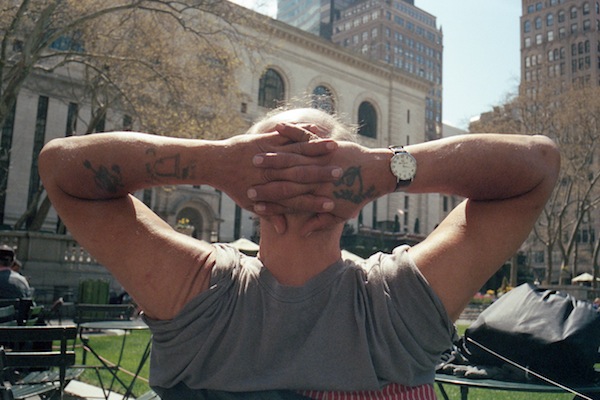 For the latest edition of Insta-view—our weekly column about Instagram’s up-and-coming photographers—Resource sat down with New York artist Joshua Allen Harris, a fine art major who often finds himself dabbling in photography uses street art to fight for a cause and travel the world. Resource got a glimpse of what over 85,000 of Harris’ Instagram followers get to see through a discussion of social media, photography, and upcoming projects.

How did you get into photography? Did you go to school or did it start out as a hobby?

Yeah, I actually studied fine art and worked with painting, sculpture, and a little bit of video. And then I started uploading onto Instagram and uploading pictures with my iPhone and it brought a lot of my earlier practices together. I really loved the immediacy of being able to make something and have it resemble the beauty you just saw, which was what I was trying to do with painting and sculptures. So it kind of clicked at the right moment, and over the last few years, I have engulfed myself in the process of learning [photography] and the history of it. And I still feel very young in the whole process, but I feel lucky to be in New York, surrounded by great photographers.

Has Instagram or social media aided the progression of your career? Has it given you any connections or opportunities?

Yeah, for sure: I am a part of Tinker Street. They are a bunch of photographers that came together to help protect each other—as far as rates were concerned. Clients were reaching out to Instagrammers with a high following to advertise and no one knew what fair fees were. As a result, a group of us came together and it has grown to fifty worldwide and we work with a lot of the big names in the industry. It has also put me in a community of people, where we assist each other and are there to be an extra eye or hand on shoots. And all of this has been great networking for me.

I think it is interesting because there are people I met online through social media and had a quasi-relationship with—I guess—until I met them in person. With me, I had a group of photographers that I fell into that I really admired: and to be included with them was such a bonus for me. We meet each other now and it is cool to talk about something we love and respect about the other person. I am slowly meeting a lot of the people that I was inspired by. When they come to New York, they look you up and that has been great.

Do you feel that Instagram has diluted the photography pool by giving artists and those who shoot selfies the same voice?

I really respect photography, especially those who have worked in it and studied it for years. And there is a craft in it that is built over time. I think it is something you learn as you go. And the people who have worked in the photography field have gained a certain reputation, which I admire and respect because I understand the amount of hard work that has gone into it.

On the flip side, what I find interesting is that photography is changing so rapidly—with all of us using it as a language. We attach our ideas with a photo: so much so, that it is opening a whole another way of articulating. And for us to come together on Instagram and understand that photography is changing, I find that intriguing to the flipside of the professional photographer’s complaints. I look at it like an artist, I just use a different tool; when I am out shooting, of course I am thinking about composition, but I like to think I am shooting from an idea of fine art and narrative. I am hoping my eye and the beauty that I capture is more about the image than the question of my professionalism. If you create an image that connects with somebody then that is the beauty of it.

So lets move away from photography for a second: can you explain your garbage bag balloon animals project? What made you come up with that?

That’s a beautiful project that I felt fortunate for being a part of. [It started in] 2008, which was the height of election season, particularly the end of summer. And climate change was being debated and I was in school; so I happened to be walking down the street and a bag of trash inflated in front of me from a subway grate and I just got excited. I had the time to experiment with the wind and energy. All of a sudden the idea of a polar bear came into my mind because I was using white bags and creating shapes that way.

So I created the first animal, it was a white bear made out of recycled trash bags, and it used renewable resources, which was the [Subway] ventilation. But it also was the icon of climate change because we are losing these polar bears with the ice caps melting. It would also be deflated, which was a surprise element: as the air diminished the bear slowly died and you can feel it emotionally. So you went through this whole emotional experience with the bear: you were delighted by it, saw it move and watched it die.

The first one happened to be photographed. And the person who took the picture, was coming from a dinner for a premier street art site. And they happened to snap a photo and it took off. As a result, I was fortunate to travel the world: I was on Sesame Street and was a part of a fight global warming campaign that won a ton of awards, which was shown in Istanbul and Amsterdam. So I was swept away by that project and I was fortunate that a lot of things fell in my favor to make that happen. It was just an amazing time in my life.

I see that your Tumblr has a lot of pictures of random people: whether it is sitting or simply walking, how do you approach these people to take their pictures? What is the process?

I work as a Men’s wardrobe stylist with J. Crew and American Eagle. So I am on set a lot and I see a lot of commercial photography. So I wanted my artwork to be something that I didn’t have at work—so I was drawn to street photography. And with my fine art background that was another reason why capturing street images was the most interesting to me: there is something very deconstructive, and very honest, about capturing something mundane. I find that type of photography the most challenging.

So the candid street photography—the real life moments—those are the things that I am after. So I recently just moved to a Leica Camera and I am shooting a lot of film. Thirty-Five millimeter street photography with a Leica, you can almost work like a journalist: it is small and fast and can shoot very candidly, unlike the new DSLR, which can be a bit intimidating. So there is an opportunity for a little bit more intimacy with that kind of shooting method. All my interest aside, I have been shooting my own project on the street. A lot of what you see on Tumblr is the pictures that don’t fit into the separate side project I am working on.

And finally, can you just briefly speak about that side project and other potential projects?

I am definitely working on a personal street project. What I have found interesting with Instagram and Tumblr is that we are constantly sharing our work with immediacy: we filter, edit it and post it. We have this weird desire to get likes and comments and it gets very addictive. I wanted to have something that I built over a long period of time and didn’t share. And I wanted to see what would happen with a large body of photographs, what that would tell me about my aesthetic and style. And I am three months into this six month street project, so there are highs and lows. My hope going into this project is that I would corner myself and work out of that corner, so I might find something out of my work that would last longer than this constant need to post for likes and comments.

Follow Joshua Allen Harris on Instagram or Tumblr and be sure to check his blog for his latest projects and activities.