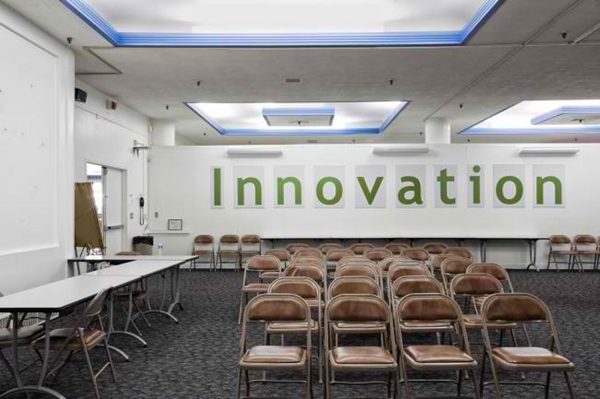 Kodak City – A look inside a lost civilization

Eastman Kodak, the company that pioneered the movement of photography from 1880s until the 1960s, lost the chance to lead the transition into the digital imaging age. Missing the boat entirely, the company plummeted as film photography eventually lost its grip on the industry and the digital technological age was ushered in. The ensuing struggle of the once giant company, who was often called ‘Big Yellow,’ caused Kodak to collapse as they filed for bankruptcy. Tied to its misfortunes is the economic engine of the city where it was based; Rochester, New York, which today serves as a haunting reminder of Kodak’s glorious past.

Through Catherine Leutenegger‘s photographs, the city, which was once synonymous with photography, searches for a new identity as its rich history is buried adrift: becoming even more irrelevant with each newer generation. Looking back, this interesting photography book Kodak City, released by publisher Kehrer Verlag with texts by Catherine Leutenneger, Joerge Bader, A.D. Coleman and Urs Stahel, takes us on a journey of Rochester’s reinvention and eventual escape from Kodak’s tight grip.

To learn more about the wonderfully brilliant Kodak City, Resource Magazine sat down and talked with photographer Catherine Leutenegger.

What made you think of doing a photography book about Rochester in the aftermath of Kodak?

Digital technology has brought significant changes. We have begun designing and viewing photographs in a new way over the past decade. As a member of what is probably one of the last generations to use film, I feel particularly affected by the upheavals the digital age has brought. Since the early 2000, I have been investigating the medium of photography and the context surrounding its production, with the intention to analyze this singular period of transition.

The initial stage of this exploration began in my region, western Switzerland. In 2007, this body of work has been recognized with a number of awards. It gave rise to both an initial monograph (Hors-champ by Infolio Publishers) and an opportunity to continue my project in New York. As the decrease in traditional photography business led to the closing or restructuring of many photo-processing labs, I felt curious to visit Rochester and discover how the biggest manufacturer of film worldwide was dealing with the digital revolution.

The book idea came later on, following the public announcement of Kodak’s bankruptcy in January 2012. The book, Kodak City, is a synthesis of these two trips. It offers a freeze-frame view of a singular moment in the history of photography. It is a testimony that is both engaged and objective, covering a part of America’s industrial heritage that faces inevitable disappearance. It is also a way of paying homage to the father of modern photography – George Eastman — in his hometown, which he transformed into the cradle of the world’s collective memory for the entire 20th century…

In my opinion, [Kodak City] is a perfect form to leave an historical and perennial trace, like pickling moments in formaldehyde. It’s a sensory object, a conveyor of messages and emotions in an environment that is dominated by the virtual.

Does the locals of Rochester still harbor bitterness with the effect of Kodak’s bankruptcy? Or do some foster fond memories about Kodak’s heyday?
Through my interviews I could survey that the impact was at many levels: fewer workers had good paying jobs and spent money. But also, local suppliers were no longer receiving orders from Kodak. Then there were less tax revenue from the loss of worker income tax, sales tax, and property tax paid by Kodak: [and even] less contributions to charity from Kodak and employees. The other loss is that Kodak brought educated technical and business professionals to the Rochester area. This improved the community.

Ex-employees, who lived in the glory days, said they thoroughly enjoyed their time at Kodak. They dominated the city known as ‘Kodak Town.’ As a Kodaker you were respected. The people were talented, skilled, hard-working, and honest. Kodak was a very good company to work for and working for Kodak was considered a lifetime job. Today education dominates. The University of Rochester, along with Strong Memorial and Highland Hospitals, are now the largest employers in the city.
How do you describe the experience of doing the project Kodak City?
My experience doing that project was very intense. The access to ‘Big Yellow’s’ manufacturing facilities was much more restricted and complicated than I had expected — to the point that I almost gave up on my idea. It was difficult to make a convincing case for my project’s historic and artistic value to manufacturers who were, understandably enough, concerned about preserving the brand’s image as a thriving company. These constraints led me to expand my field of investigation to the outskirts of the Kodak empire’s barricades: turning my gaze to the city of Rochester, its central business district, industrial zone, and suburbs — as a reflection of Kodak’s decline.

Kodak City won’t be released in the United States until the end of summer or early fall. But a signed copy of the book can be ordered directly from Catherine Leutenegger, via her Paypal: cath@cleutenegger.com. For more details visit her website.