Photographers May Be Responsible For Brooklyn Bridge White Flag Incident

The air was sticky and hot, and as usual the Brooklyn Bridge was backed up. While drivers sat sweating in their cars, they looked for inspiration; gazing up at the one sole reminder of who they are, where they’re from and what motivates them to travel along the jam-packed bridge to work each morning—the American Flag. But yesterday, there was no sign of patriotism for these edgy New York drivers.

On July 22, the NYPD caught video of about five people atop the Brooklyn Bridge where they raised two bleached white flags in place of the Stars and Stripes that usually flutter above traffic. Although police reported that they’ve identified the nicknames of the alleged vandals, they have yet to track them down—which is why I’m writing this post. There have numerous been reports that suggest these suspects are, in fact, photographers. 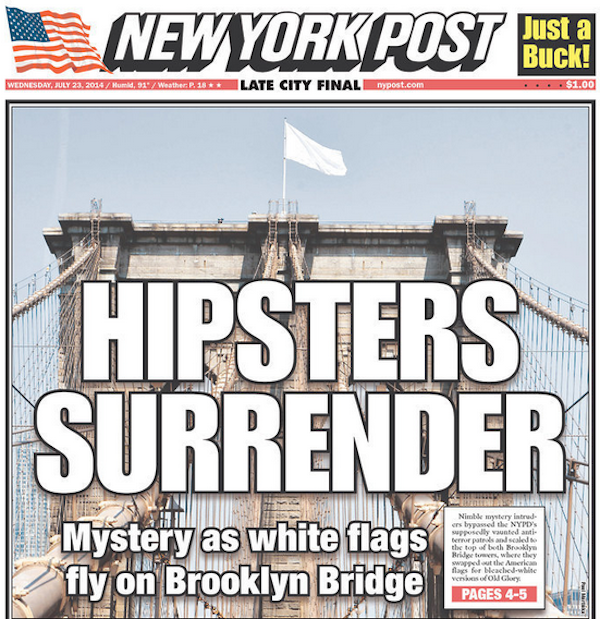 Yesterday, the Gothamist reported that the NYPD was pursuing an “insider angle” to catch the suspects and, as it turns out, this undercover lead may have something to do with the Instagram accounts of @lastsuspect and @mattdoscher. Apparently, these photographers have been posting photos of the flags and insinuating that they were responsible for the event in a series of since deleted comments. It has also been theorized that this social media banter was merely a hoax to traffic unsuspecting users to their accounts. “It’s entirely possible that they’re coyly hinting at involvement to gain more Instagram followers,” wrote the Gothamist.

Although Deputy Commissioner for Counterterrorism and Intelligence John Miller told the NY Post that he doesn’t believe the event was connected to any sort of terrorism, reports say nearly three dozen detectives have been put on the case. These officers were pulled from the department’s homicide, counterterrorism, intelligence and transit units, and they seem pretty damn serious about catching these pranksters—most likely because they’ve been humiliated for allowing these trespassers to slip past anti-terrorist patrols. 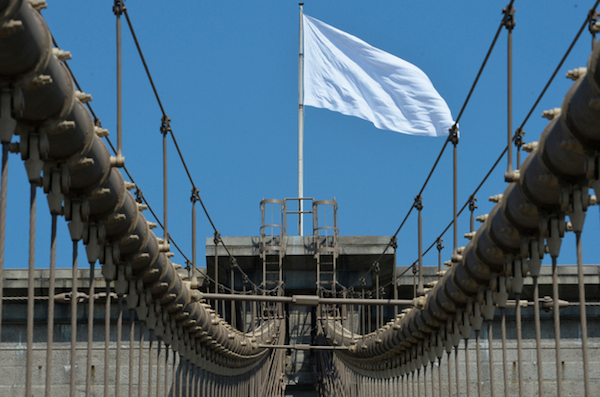 “If flying a white flag atop the Brooklyn Bridge is someone’s idea of a joke, I’m not laughing,” retired police captain and Brooklyn Borough President Eric Adams told Fox. “Political and social expression, whatever its message may be, has a place in our society, but not at the expense of others’ security.”

The NYPD is offering a $5,000 reward for information on the suspects, which was donated anonymously by someone who may very well be the most patriotic person alive. We’re also urging our readers to come forward if you have any information on these vandals—especially since they may be photographers. If you see something, say something, right?

Watch a clip of the NYPD scaling the Brooklyn Bridge to take down the white flags that were planted. Video courtesy of Gothamist.

UPDATE: The Daily News reported that the photographers have been cleared and skateboarders have become the latest suspects.