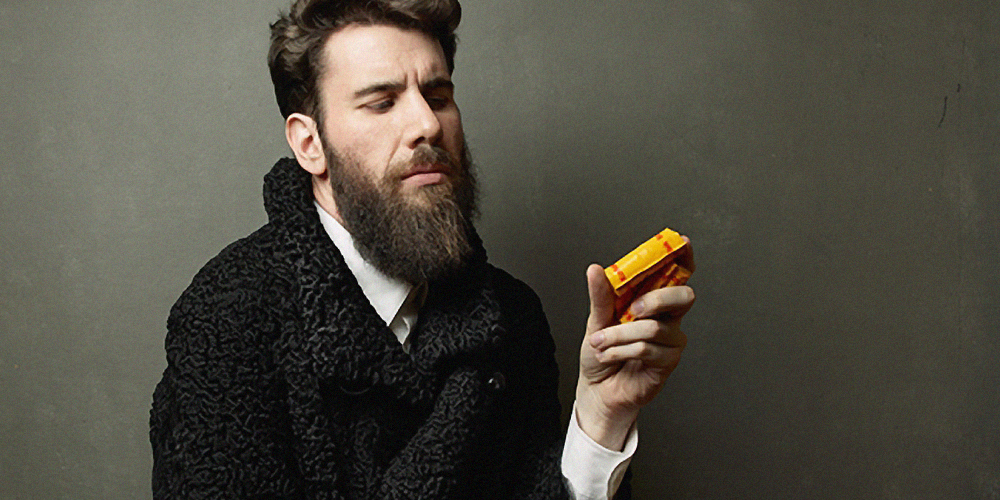 Selfie A Day Keeps The Doctor Away

Excessive postings of self-portraits on your social media might drive away some of your friends or may even convince them to block you from their news feeds. That is, if you constantly shoot and share redundant images of your self that are narcissistic and lack any sense of a creative style. We thank the photography gods that this is not the case with photographer Mike Mellia, who brings along a fresh concept built around self-portraits in his project, ” A Selfie A Day Keeps The Doctor Away.”

That one time volcanic ash turned everyone into stone

Mike Mellia’s ongoing Instagram series called A Selfie a Day Keeps the Doctor Away is a photography project, which he describes as combining “society’s technology-driven vanity with unusual references from advertising, culture, and art.” And in doing this project, Mike dismisses what we would normally think about selfies: “in social media, the prototypical “selfie” usually lies at one of two extremes: either mundane normalcy or unbridled megalomania.” Straying outside the normal box of popular thinking, Mike ventures to present self-portraiture in a new and fresh perspective.

Captioning each of his self-portrait photographs with outrageous and out of the world claims such as “that one time I developed film using only my mind,” or “that one time I played backgammon in an old warehouse in Mongolia.” Mike also highlights what he points as “the surreal, the banal, the duplicitous, or the exhibitionist aspects of photography that technology is encouraging”

That one time I developed film using only my mind

Like a real artist, the reason behind this project wasn’t driven by a desire to evoke some deeper or revolutionary idea. Rather, it started with just a desire to see how his colleagues would react at his playful creativeness. And sometimes, a simple motivation like this is all one would need to create uniquely wonderful and fresh art: even if it involves excessive vanity.

Resource Magazine was able to chat a bit with Mike Mellia, where we asked him a few questions.

Before this project, describe your photographic style?

My style of portraiture is very painterly, but also, very natural. The quality of light in paintings by the old masters is always so beautiful. There is also usually an element of allegory in my works, where the ideas behind the images relate to something larger for the audience to consider. I feel comfortable using this visual language in my personal projects, as well in advertising works.

That one time it was a full moon

How do you describe the evolution of portraiture in the digital age?

I think photography is becoming an even more important tool for communication; and of course in selfies, fashion, photojournalism, advertising, art…this is all portraiture and everyone is practicing it on their phones everyday. However, with so much content being created, it is so important to me, now more than ever, to have a strong artistic vision and a unique visual style executed with quality.

That one time I saw who shot JFK

What other projects do you have in store for the future?

A Selfie a Day Keeps the Doctor Away is an ongoing project on Instagram that I continue in between advertising photography assignments. I also have a different series of art photography called, Another Day in Paradise that was inspired by the unexpected loss of my father and also by the changing generational landscapes of New York City and The Bronx. I began creating these cinematic scenes that were a series of movie stills that told a story through their mood.

Last question and this is a difficult one, How do you set up your selfies?

I place the camera on a tripod and then usually use either a remote or a timer.

Of course, how come I never thought of that? Anyway, check out the rest of Mike Mellia’s A Selfie a Day Keeps the Doctor Away images and tell us your favorite selfies and captions.

That one time I visited a Dutch astronomer

That one time I sang at the opera

That one time I forgot where I was going

That one time Einstein needed help

That one time the dog ate my homework

That one time I read Wikileaks

That one time I beat up Clint Eastwood

That one time I joined a cult

That one time it was raining

That one time my wife cropped my picture

That one time I went birdwatching

“Mike Mellia is an American photographer whose allegorical imagery relates to larger conceptual ideas, telling stories through a painterly technique and creating cinematic compositions. Mellia’s signature style is a distinct aesthetic that combines an old-world sense of beauty with complex conceptual modern ideas. He has held several art exhibitions in NYC and his work has been commissioned by a variety of commercial clients. Mike Mellia graduated from Columbia University in 2002 and lives in New York City. View his entire portfolio at www.mikemellia.com

All Photographs Used with Permission from Mike Mellia.