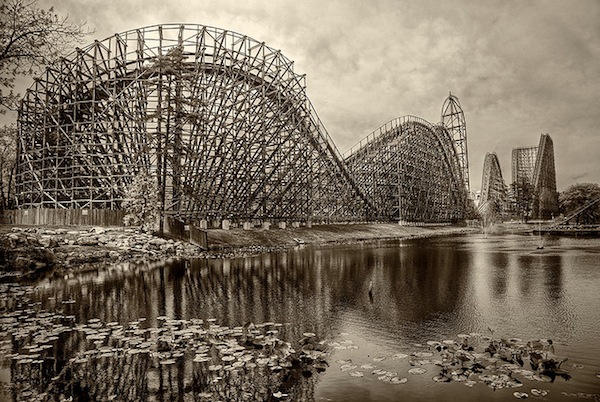 18 0f The Sickest Rollercoasters To Photograph

The only thing as cool as actually riding a rollercoaser is beautifully photographing one. Perhaps the amazing breeze that goes through your hair while riding a coaster at breakneck speeds is an unmatched euphoria, but getting the right photographs of these unbelievably gorgeous hunks of metal or wood could be just as enticing. So, here are 20 of the sickest rollercoasters in the world to photograph.

Bizarro from Six Flags Great Adventure is a gorgeous purple rollercoaster that takes its name from Superman’s villain Bizarro: which is the ‘mirror image’ or bad version of Superman. What is even more ironic is that the Bizarro rollercoaster used to be called Superman: Man of Steel; with that said, its cool purple colors and slow climb to over two hundred feet, gives any photographer the opportunity for cool photos.

The Intimidator 305, which is a Dale Earnhardt themed ride, is a wildly entertaining coaster from our friends at Kings Dominion. Its five thousand foot track mixed with a three hundred foot drop makes this an extremely cool rollercoaster to photograph. Add the fact that its height dominates the very rural theme park and you have an empowering coaster that will look good in your portfolio.

A personal favorite of mine, Nitro, which is in New Jersey’s Six Flags, is a beautifully colorful ride that has gorgeous surrounding scenery. On top of this, the opening climb to over two hundred feet offers plenty of chances to take photographs on and off the ride.

One of the oldest rides on the list, Coney Island’s world famous Cyclone is a fantastic wooden rollercoaster that originally opened in 1927. And though the surrounding area has gone through a lot of changes since then—most notably the amusement park changed names from Astroland to Luna Park—it still has that same New York aesthetic that makes it come alive in every photograph.

©Michael Sauers via Flickr Commons
Personally, the scariest rollercoaster I have ever been on, the Kraken, which is located at SeaWorld, only has a drop of about one hundred and fifty feet. But the way in which it drops you, through a corkscrew, will have you screaming for days. With that said, there is plenty of exposed area around the coaster, including a beautiful lake; this means pulled back shots of the coasters, like the above photo, will look gorgeous with the surrounding scenery.

The Top Thrill Dragster, which came before the world famous Kingda Ka, was the first coaster to break four hundred feet. The ride, which accelerates at 120 MPH, has a short ride time of just thirty seconds: but those thirty seconds will give an adrenaline rush that is hard to match. Again, while it does not seem like much, its 400 foot frame is worthy of any type of picture.

Lagoon Amusement Park’s rollercoaster Wicked is visually stunning for both its colorful track and ninety degree ascent/descent. Furthermore, the way it is clustered in the above photo makes the whole park look like one giant rollercoaster: this photo creates almost a natural multiple exposure feel.

Yes, another rollercoaster from Six Flags New Jersey makes it on my list: however, this is my list, so get used to it because it will not be the last. El Toro is probably my favorite wooden rollercoaster in America. And it also does not look too shabby in a photograph. As the above photo shows, the lighting, the water and the background attractions perfectly mesh to form an amazing photo.

Kingda Ka is something that needs to be experienced by everyone. And even though the ride is less than thirty seconds, the four hour wait was totally worth the euphoria of plummeting 418 feet at 128 MPH. Yes, the actual design and coloring is like the Top Thrill Dragster, which leaves a lot to be desired: yet, it is the tallest rollercoaster in the world. This simply makes the rollercoaster a sight to behold: and if you want a challenge, you can even photograph it while riding.

A very futuristic design that looks stereotypically Japanese: the Takabisha looks like it belongs in a version of Blade Runner. Its sleek industrial design, which is further emphasized by the barricade around it, could result in a fantastic picture.

The rollercoaster/free fall, Vertical Velocity shoots the riders, you guessed it, up vertically: topping out at 185 feet. Again like Kingda Ka or Top Thrill Dragster, there is not much to the design; however, the ride’s simple ascent/descent makes this probably one of the easiest rides to photograph on this list.

The United Kingdom’s Pepsi Max Big One, or simply the Big One, sounds more like an over-compensation than a declaration. Either way, the ride at Pleasure Beach Blackpool is a two hundred foot coaster that is as exciting to shoot, as it is to ride.

The Diamondback is famous for being the first “hypercoaster to feature a splashdown.” What this means is that the eighty MPH coaster directly interacts with water at one point: and with the water forcefully being sprayed, it creates the perfect photo opportunity on the ground or in the air.

The fastest rollercoaster in the world, the Formula Rossa tops out at 150 MPH. Now, I would pay hundreds of dollars just to get a chance to ride this coaster, let alone take a picture of it. The overall design mixed with the amount of space it takes up—over seven thousand feet—makes this the perfect photo opportunity in Abu Dhabi.

Another wooden coaster, The Voyage has a cool design that makes it appear older than it actually is; it even appears older than the recently refurbished Cyclone. And this could provide an interesting aesthetic to any photographer’s portfolio.

Another personal favorite of mine, The Hulk, which is located at Universal Studios’ Islands of Adventure, is an exhilarating ride that had me hooked after the initial take-off: The Hulk shoots the cars out at over sixty MPH. Again, if you want proof of how gorgeous filming the coaster could be, just look at the above picture.

©machfive via Flickr Commons
One of the coolest rides at California’s Disneyland, the California Screamin’ is awesome to photograph because of its towering Mickey Mouse head, which is incorporated into the track. And while the surrounding area is clustered, the best image to shoot is the coaster’s cars passing through Mickey’s head.

The Eejanaika is famous for being a four dimensional coaster: the seats rotate at 360 degrees during the ride. On top of this, it is the fastest and tallest four dimensional ride in the world; now, mix the moving seat with plenty of flips and this gives the ground photographer the ability to shoot from many different angles.