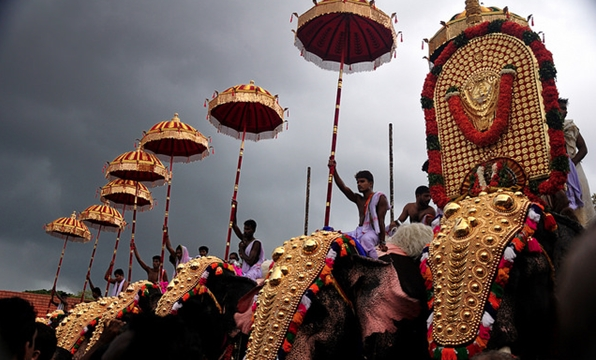 15 Best Festivals To Photograph Around The World

Festivals around the world are jam-packed with cultural, historical and religious significance, so you can always bet on an endless amount of photo-worth worthy content (not to mention a killer party). Here are the 15 best festivals to photograph around the world.

Taking place mainly in Mexico but slowly spreading to other cultures around the world, the Day of the Dead is an interesting place to photograph the locals as they honor the dead. As many know, the custom is to put on calaveras makeup, gather around and pray at the graves of their love ones. But the real fun is at the parades, where the festival’s wildest attendees are out and about.

2. Running of The Bulls

Photographing a group of men running for their lives while a rampaging bull chases them creates a wonderful opportunity to capture action shots. Mainly held in Pamplona, the tradition has also spread to other Spanish towns. The summer event, which was originally popularized by Ernest Hemingway in his novel The Sun Also Rises, remains one of the most widely known festivals in the world today.

Also known as the “festival of colors,” Holi is a spring festival celebrated by Hindus in India and Nepal. Like today’s Color Runs—but with a more significant meaning—this event is known for the widespread practice of throwing colored powder at each other. Photographers covering this colorful festival will never run out of interesting subjects to shoot, just make sure to protect your camera from all that excess powder.

This Taiwan festival, where Fiery red lanterns slowly rise into the sky, is a gorgeous sight to behold and is so beautiful that it directly inspired the filmmakers of Tangled. These lanterns fill the nighttime skies by the thousand, creating a near perfect site to capture with a camera.

Held every last Wednesday of August in the small town of Buñol, the fierce tomato fight isn’t indicative of the fun-going nature of everyone involved (or is it?). With that said, just don’t let your camera get squished by a direct tomato hit and you’ll be fine.

Probably the mother of all drinking events, this is held annually in Munich from late September to early October. The sight of locals and tourists enjoying a big mug of German beer is always a great capture.

Celebrated on March 17, the death anniversary of Ireland’s Saint Patrick, this festival provides a lot of religious and cultural insights along with a hell of a lot of drinking. The day has an abundance of shooting opportunities with men and women in green, parades and celebrations.

A live action version of Pixar’s UP, this event has hundreds of colorful hot air balloons filling the blue skies. Best of all, these balloons create mesmerizing subjects for any photographer shooting from the ground.

Every music lover’s fantasy, the Glastonbury music festival is always attended by the biggest musical artists of today. If you;re a landscape photographer who dabbles in music photography, then this is a must-shoot event for you.

Famous for its intricate masks, the Carnival of Venice is held annually in Venice, Italy. Large droves of tourists come to witness a parade of costumed revelers, who are in fancy dresses and hidden behind elegant guises.

Marking the end of the Yule season in Scotland, this series of “fire” festivals attracts revelers who march in a variety of themed costumes while holding a fire torch, presenting a Viking-like world that is amazing to shoot.

A festival where colors seem to be muddled by all the mud thrown around, the Boryeong Mud Festival is an extremely fun event in a gross environment. But even if it is gross, it’s so unique that it will surely produce stunning and exceptional images.

Travel Junkie calls this, “undoubtedly the biggest party on Earth.” The Carnival in Rio is held annually before lent and more than 2 million people participate in it. As the above image shows, the ensuing parade and street parties create some great photo opportunities.

During the month of January, a trio of festivals honoring Jesus Christ or the Santo Niño is held at the cities of Iloilo, Kalibo and Cebu in the Philippines. The coolest part is that street dancers will wear tribal costumes, face paint and make-up to celebrate this major event.

© Amit Rawat via Flickr Creative Commons
Held at the Vadakkunnathan Temple in the Southern Indian state of Kerala, the Thrissur Pooram is another colorful festival highlighted by parading elephants. This over the top event will make any photographer salivate at the photo possibilities.