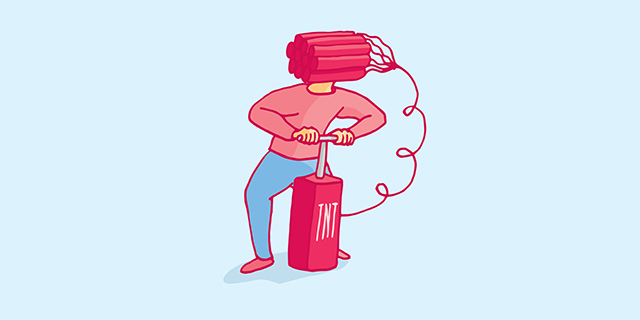 While YouTube can, at times, feel saturated with the web’s most inane, mundane and all around dumbass videos, Vimeo has stepped forward as the online leader of quality video content with amazing videos from truly talented creators. Now, that doesn’t mean every video on Vimeo is good but, more often than not,  you come across some pretty mind blowing videos from some of the most consummate video creators in the world. We sifted through hours of online video to find 15 of our favorites to share with you and bring a little inspiration your way.

A great music video from the band O Conquerer, ‘Fake Love,’ which is from the mind of Christophe Thockler, beautifully mixes time lapse and stop motion techniques. If you have a few minutes, be sure to check this one out: according to the filmmaker, it took 150 hours to shoot all the photos and three months to make.

In Southern Australia, you will find the gorgeous Lake Eyre: a place that is certainly on my bucket list. However, instead of spending thousands of dollars to see the beauty of this lake, you can now watch Marcus O’Brien’s eye-popping Vimeo video.

It is rare to use the words commercial and clever in the same sentence, but this Latin American PlayStation ad provides an entertainingly clever commercial that perfectly sells the system.

If I had this as a kid, maybe I would have paid more attention in science class. So in 2010, Luke Geissbuhler decided, with the help of his kids, to send a makeshift camera to space. So with a HD camera, balloons, an iPhone (to hopefully track where the HD Camera lands) and several other handcrafted devices, they sent a camera to space: and this amazing video is the result.

If you ever want to feel simultaneously inadequate yet gargantuan at the same time, then you seriously need to watch Clemens Wirth’s Macro Kingdom series. It is a three part series that shows the ins and outs of the unseen world: insects, particles and microorganisms galore.

This is the type of stuff I fall in love with on Vimeo; yes, this could be seen as a blatant Polaroid commercial, but it is a cool inventive idea mixed with some serious CGI skills. And best of all, it maintains a distinct style that certainly makes the product extremely memorable: at the moment the director, Francois Ferracci, is attempting to make this into a short series and if you want to see more, you can donate here.

Now, this is an amazing display of child-like wonder and CGI; I personally do not know the budget of this, but this shows how good CGI could look if it is scaled down and the proper time is taken. The director, Miguel Ortega, also has a long history of visual effects work and if you want to see his past efforts, visit his website.


An oldie but goodie, this music video is shot entirely in first person and is one long action sequence—becoming a testosterone fueled thrill ride. While this originally premiered on YouTube, this has since become one of the highest viewed videos on Vimeo, with 18.1 million plays.

A truly masterful video, demonstrating how powerful/moving a time lapse shot could be. Dustin Farrell certainly shows he has the skills behind the camera, as well as, in the editing bay.

10. The Mountain from TSO Photography

The most viewed video on Vimeo, also happens to be one of the most gorgeous time lapse videos that I have ever seen. The Mountain, which was made by Constantin Philippou, perfectly shows the Milky Way galaxy along with Spain’s visually pleasing El Teide. This is certainly a video that needs to be seen to be believed.

11. Everything Is A Remix: THE MATRIX from robgwilson.com

The worst kept secret of Hollywood, this video shows how a lot of The Matrix was inspired by past Kung-Fu movies and Sci-Fi stories. To say that The Matrix is completely original is to say that Tarantino is one hundred percent unique: Tarantino’s dialogue is what takes his scripts to the next level, but his scenarios/situations are clearly taken from movies that influenced him.


While this is more of a commentary on the state of cameras in animal research, this still has some of the coolest animal videos that you will see on the Internet. And BBC Wildlife Director John Downer gives some very insightful commentary into the cameras that they use to capture these beautiful animals.

As the title of the Vimeo page suggests, this video is a nine times awarded iPhone short film. Now, the coolest part of that description is that this was completely shot on the iPhone and it does look fantastic. He dresses the cell phone image with some lens flares and a cool color palette, which certainly makes this video worth a watch.

Now, this music video from The Hoof & The Heel, is amazingly shot by director/editor Bryan Schlam. It tells the ‘tried and true story’ of the up and down struggles of love, but its beautiful imagery suggests some serious talent from behind the camera.

A cool video from BYU design student Brent Barson, this is described as “a visual typographic feast about the five senses, and how they contribute to and enhance our creativity.” But the best part is that all of this was done by hand, with no computer generated effects, which is truly impressive.