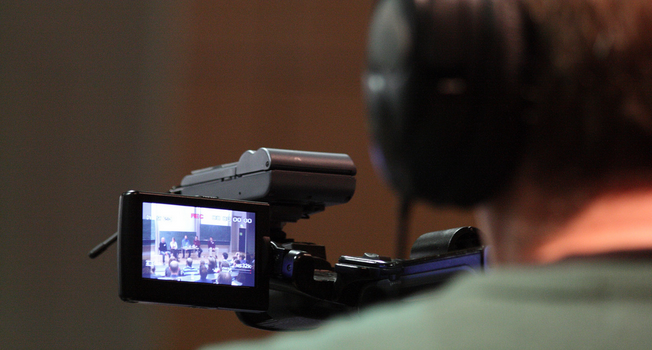 17 Best Music Videos Of All Time

There have been countless lists of best music videos of all time pushed by renowned publications like The Rolling Stone, Entertainment Weekly and Time Magazine to name a few. But since we’re a photo publication, here are the top 17 we believe are appreciated the most by photographers and filmmakers.


This was made in 1980, a year before the foundation of MTV, so don’t get turned off by its antiquated look because if seen from an artistic standpoint, the video highlights the genius eccentricity of David Byrne. This music video was later included in an exhibition at the New York’s Museum of Modern Art.

Every photographer and filmmaker’s dream is to play around a large intricate set and let loose their creative juices. The resulting product is Tom Petty and the Heartbreakers’ version of a creepier Alice in Wonderland world.

What better way to break down the barrier that separated hip-hop and rock at that time than to have Steven Tyler busting down the wall of the studio to confront the members of Run DMC. The famous jagged guitar riff and the energy provided by the Run DMC makes this as what TIME Magazine calls a “genre-smashing” music video.


Every scene from this music video seems straight out of a photography exhibit oozing with primitive and wildly painterly visuals. Directed by Mark Romanek, who would later on helm feature films, he successfully blended Nine Inch Nails’ industrial-Goth image to an acceptable medium that best expresses the band’s dark and grotesque artistic concepts.


Many of the widely regarded filmmakers of today started in the music video business. Spike Jonze for one was able to shoot wonderfully, The Beastie Boys in their mustache-rocking-hero-cop personas. Filled with humor and action packed scenes that resonates well with the high energy beat of “Sabotage”, it had “classic” written all over it when it was first shown in 1994.


Pop quiz: How did filmmaker Jonathan Glazer made this compelling music video? The answer was revealed in a “making of” documentary and it was the walls moved, not the floors. This video is filled with all sorts of visual trickery, and when coupled with lead singer Jay Kay’s flawless dancing it remains up to this day as a shining example of overflowing optical ingenuity.


Telling the story of a milk carton (Milky) this animated and real-action music video garnered many awards and consistent inclusions in a lot of ‘best music videos list of all-time’ list. The video’s lovable portrayal of Milky earned the milk carton used in the video the distinction of being sold at an auction in 1999.


The entertainment value of this music video is off the roof because who wouldn’t be amused by seeing one of cinema’s tough guys dancing all over a deserted L.A. hotel lobby? Another example of Spike Jonze’s captivating genius at work, if you and add in the superb dancing talent of Christopher Walken and the catchy music of Fatboy Slim, it’s most definitely a win.


Filmed seven months before the musical icon’s death, filmmaker Mark Romanek juxtaposes scenes of Johnny Cash shot at the House of Cash Museum in Nashville with footage taken of the younger Cash. A fitting tribute from one artistic luminary to the other, it doesn’t hurt that Johnny Cash’s rendition of a Nine Inch Nails’ song became one of the best covers of all time.

Tapping into HTML 5 technology and the vast Google resources, this is the first music video that maximized the digital age. Praised for pushing “the boundaries of the music video by introducing the factor of interactivity,” you can fully experience it at The Wilderness Downtown.

A stunning example of how time lapse photography could produce a video-like appearance, it was of course achieved by a photographer: Cesar Kuriyama. There were more than 45,000 photographs taken with a Nikon D200 DSLR to create this four minute music video.

The past few years saw a lot of prominent photographers working behind the camera of a music video shoot. South African photographer Roger Ballen is among them and in this video, electro-rap group Die Antwood incorporated its unique aesthetic approach in this wildly inventive visual feast.

A photographic parade of colors, religious symbolism and images from a child’s dream all conspires to make Anton Corbijn’s work a masterpiece, which is a beautiful and haunting video made more eerie by Kurt Cobain’s intense stare and deep blue eyes.


Robots conveying a deep emotion while moving in slow pace along Bjork’s always touching music, director Chris Cunningham achieved a stellar creation of a world inhabited by replicants through expressing hints of human emotions at each shot of the robots.


Inspired by Georges Méliès’s silent film “A Trip to the Moon”, this music video introduces modern generation to the age of silent movies which resulted in raved reviews from critics and fans alike. Billy Corgan was surprised at the reaction: “I don’t think we’ve ever had people react [like this]…it just seemed to touch a nerve.”

Before South Korea’s pop superstar Psy’s viral “Gangnam Style” video, Ok Go’s “Here it Goes Again” spearheaded the viral music video movement with a hilarious take on treadmill dancing. Sometimes the best ideas are those that just pop out from being silly and having a fun attitude, which is clearly what this dance rock group possesses.

Capping off this list on a “Happy” note, Pharrell Williams and his cast of characters dances all over Los Angeles bringing a positive attitude that transcends to viewers all over the world.