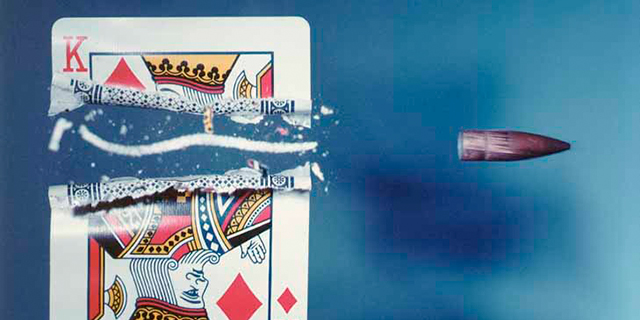 A professor of electrical engineering at M.I.T. , Edgerton changed the way photographers use light to freeze moving subjects and the way the rest of us see the world. He’s best known for changing the stroboscope from a little used piece of laboratory equipment into essential photo gear. Even if that’s all he had ever done, we’d probably still celebrate him because strobes are kind of a big deal in this business, but Edgerton did not stop there. Not content to change the photography world, he kept his eyes peeled for other things he could flash.

A drop of cranberry juice rises out of milk in a red vessel. The brief close-up exposure, taken at the same speed needed to freeze a bullet, reveals a moment in the rapid transition of colors caused by the intermixing fluids. From “Stopping Time” 1987
Photo and caption via Edgerton Digital Editions (CC)

Edgerton first got the idea of using the electronic flash of the stroboscope to photograph everyday objects while working on his Sc.D. thesis. He credits the idea to fellow M.I.T. scientist Charles Stark “Doc” Draper. (Apparently there is only one possible nickname for M.I.T. professors.)

This series of high-speed photographs, likely taken in 1933, shows the sequence of a milk drop falling onto a plate covered in a shallow layer of milk, forming a coronet shape and then dissolving.
Photo and caption via Edgerton Digital Editions (CC)

While the first thing Edgerton photographed was tap water flowing out of a faucet,  he soon moved on to more dramatic subjects like freezing bullets being shot through objects like apples and balloons.

If you look closely at the far right of this picture, you can see the .22 caliber bullet that popped these three balloons. The EG&G Microflash was used to show how the balloon peels away from the inital puncture, until it finally collapses. At the heart of the microflash is a quart or Pyrex tube, around which are wrapped two electrodes coming from from the capacitor. Through the process of conduction, a high voltage spark sent into this tube causes an arc of electricity to jump between the electrodes on the outside, resulting in a bright flash. Unlike most electronic flash lamps, which are filled with xenon, the micro-flash uses plain air. This choice produces a much shorter afterglow from the flash than a xenon lamp. When this flash is triggered, the arc displaces the air around it, much like lightning in a summer storm. And the microflash produces its own thunder, too, like a gun shot. To quiet the noise, a glass tube, sealed with a rubber cork at the open end, encloses the quartz tube. For bullet photography, a reflector is placed around the assembled lamp to concentrate the light in on spot. The exposure is made in total darkness. To trigger the flash at the proper moment, a microphone picks up the sound from the gunshot to fire the micro-flash.”
Photo and caption via Edgerton Digital Editions (CC)

Edgerton’s work in high-speed photography eventually helped lead to developments of side scan sonars, which are used to search for underwater wrecks and were used on at least one occasion to search for the Lock Ness Monster.

Flying through the air at over 1800 miles per hour, a .30 caliber bullet collides with a light bulb. The shock waves from the impact move even faster than the bullet, cracking the glass on the far side of the bulb before the bullet exits. The bullet breaks free in a cloud of glass fragments and continues on its way. These photos represent an elapsed time of about 3/10,000th of a second, with each individual exposure lasting about 1/1,000,000th of a second. Though the series appears to be of a single bullet smashing a single light bulb, it is actually a composite of four separate bullets and bulbs. Edgerton used this technique often when photographing repeatable phenomena, in order to portray the event as accurately and with as much detail as possible.
Photo and caption via Edgerton Digital Editions (CC)

In 1939 Edgerton was contacted by Major Goddard from the Army’s photographic laboratory to help them achieve better nocturnal arial photography. Major Goddard wanted to know if there was a flash large enough to photograph an enemy target from a mile in the air. Edgerton told him that such a thing didn’t exist but saw no reason why it shouldn’t be done and that he’d get right on it.

Edgerton remained a professor at M.I.T. until shortly before his death in 1990. One of the last classes he taught was an undergraduate class in insect and bird photography.