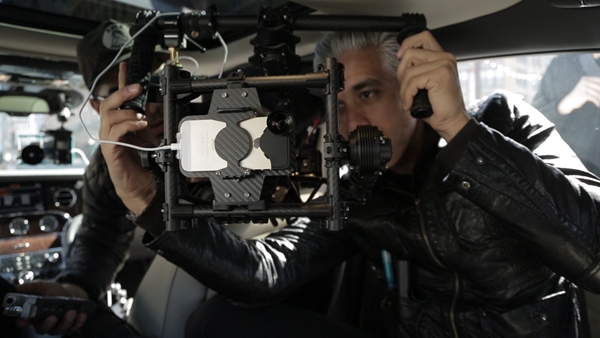 Did you ever think that the day would come, where highly creative individuals would shoot TV commercials using smart phones? Well for better or for worse, it is now being done. When Austin Reza, Creative Director for Reza & Co., was commissioned to come up with an idea for a new Bentley commercial—featuring their new Mulsanne model—everyone expected him to produce something edgy. But almost nobody assumed that he would shoot the whole commercial on an iPhone 5s.

The idea occurred to Reza after realizing that the new automobile includes many Apple-centric features. “I use the camera best suited for the project, and we shoot on everything from Alexa to REDs, ENG-style and cine-style cameras,” said Reza. “For this commercial, the iPhone we shot with was as much a character as the cars themselves. We’re talking about integrating technology, specifically Apple, into the Mulsanne, and it only made sense to shoot it with the iPhone to give a nod to this kind of techno-lux: technology and luxury kind of merging together.” The creator even used a popular iPhone video recording app known as FiLMiC Pro.

Austin Reza shooting with iPro Lens and MoVI. © About the Gear

For most of the shoot the iPhone’s built-in lens did the trick: being that the shooting took place in the back seat of the car. But for the more challenging exterior shots, Reza decided he would need a more dynamic lens: enter the iPro Lens System from Schneider Optics. Now, he mostly used the Tele and Super wide lenses, while also shooting at 50MB/s. And the iPhone 5S and iPro Lens combination gave him the full resolution needed for the project.

To complete the revolutionary and creative commercial, Reza paired the iPhone and iPro lenses with a Freefly M?VI M5 stabilizer and a SmallHD seven-inch monitor. This made life easier for him and his entire production crew: not to mention, it brought down the production budget considerably. “People look at that spot and think we had hundreds of thousands of dollars worth of equipment, but actually it was the opposite. I carried the iPhone mounted in the M?VI in my hands, the extra iPro lenses in my pocket, and the SmallHD monitor in my bag.”

And the production was aided by the usability of the iPro smartphone case, which served as the bayonet mount for the lenses: this allowed Reza to interchange lenses rapidly during the shoot. This minimalist method, even made what was supposed to be a complex shot, easy by industry standards. “It included a taxi passing by, and our talent walking through the cobblestone streets of the Meatpacking District of New York. It was mind-blowing in terms of how quickly we laid it out. I blocked the shot in probably 15 minutes, and we did two or three rehearsals. Then we did one take with our talent and we were done. I don’t think you could have done that with any dolly, any slider, or any hand held rig–that quickly. It was so simple.”

Probably the only difficulty Reza faced during the shoot was to check the reels for focus and composition. But with an Apple Store nearby, this problem was solved quickly; all it took was a lightning bolt, HDMI cable and a smallHD monitor. “We mounted it right on the M?VI and we had a field monitor for checking focus and composition during each shot.”

Capping it off, Austin Reza did the editing while sitting in the very same backseat he was filming in. Using an iPad mounted for the passengers on the backseat, the Mulsanne car served double duty as the project’s editing room. Talk about fully integrating the car into the process.

Pleased with the result of his minimalist approach, Austin Reza feels confident that he will use the same equipment on his future projects. The high quality footage that the iPhone 5s and the Schneider Optics’ iPro Lens System produced was more then he could have asked for.

Check out some behind the scenes on this video: