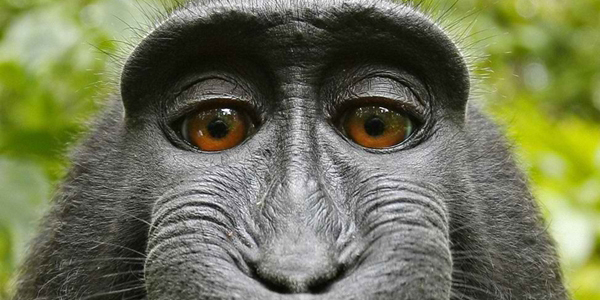 As the philosophical cliche goes, “If a tree falls in a forest and no one is around to hear it, does it make a sound?”  I’m sure you have, perhaps at one of your philosophy classes in college. But what about ‘If a monkey steals a person’s camera and takes a “monkey selfie” in the forest, who owns the copyright to that selfie?’ Though that is quite the peculiar scenario, this question, raised by British photographer David Slater, does not require any philosophy class discussion. Instead, it is left for the courts to answer as Slater battles Wikimedia Commons to take down the infamous “monkey selfie” image from their website.

While the early series of photos were blurred images, he was stunned when he saw a few standout photographs that included one exceptional photo – a selfie of a female Macaque monkey with a sheepish grin. This series of images became viral and went on to get published in leading publications: even bringing Slater some attention within the photography world.

In a chat with Telegraph UK, David excitedly shares what happened that day: “They were quite mischievous jumping all over my equipment, and it looked like they were already posing for the camera when one hit the button,” he said. “The sound got his attention and he kept pressing it. At first it scared the rest of them away, but they soon came back – it was amazing to watch. He must have taken hundreds of pictures by the time I got my camera back, but not very many were in focus. He obviously hadn’t worked that out yet.”

Yet, problems soon arose when Wikipedia uploaded the image onto the Wikimedia Commons database: which is composed of over 22 million images and videos that are free of charge to use.

According to a report by Tech Times, “The photo was uploaded as a royalty-free image on Wikimedia’s website, but was taken down by editors when Slater complained. However, other editors seem to have a different opinion on whether the image belongs to the public domain or is owned by Slater.”

“Some of their editors think it should be put back up,” says Slater. “I’ve told them it’s not public domain, they’ve got no right to say that it’s public domain. A monkey pressed the button, but I did all the setting up.”

Citing economical loss in his pursuit of the exclusive distribution rights of the images, David Slater highlights the financial burden on a photographer’s career if the court sides with Wikimedia. “That trip cost me about £2,000 for that monkey shot,” he says. “Not to mention the £5,000 of equipment I carried, the insurance, the computer stuff I used to process the images. Photography is an expensive profession that’s being encroached upon. They’re taking our livelihoods away.”

The Macaque Monkey, who couldn’t care less about the images’ copyrights, has found some backers, including Intellectual property expert Charles Swan of London-based law firm Swan Turton. Swan believes that Slater is at the wrong end of his claim saying, “The fact that [David Slater] owns the camera has nothing to do with it,” Swan says. “To have copyright, you’ve got to create something; it has to be an expression of your personality. That’s not. Obviously, there is no copyright in that picture.”

In light of Wikimedia’s transparency group affirming the image is public domain, they also deny earlier reports suggesting that the monkey owns the copyright: according to the current US Copyright Office’s policy, animals can’t own copyrights.

“The term ‘authorship’ implies that, for a work to be copyrightable, it must owe its origin to a human being. Materials produced solely by nature, by plants, or by animals are not copyrightable.”

While there is still no definite ruling on whether the Macaque monkey images are public domain, David Slater still needs to raise a significant amount of money to bring the issue to the courts. As for the actual answer to the question, for now it must remain a philosophical one.