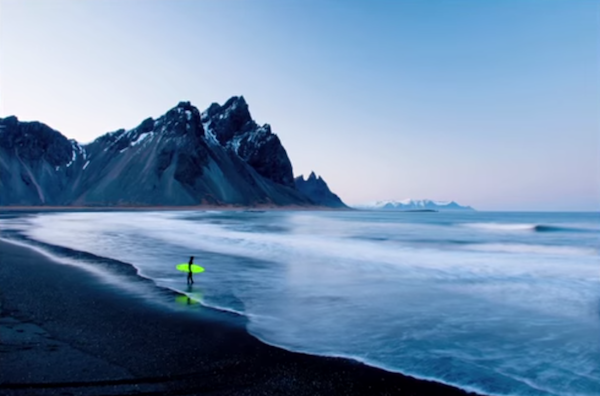 When evoking images of a surf expedition you initially think of clear waters, sandy beaches and vibrant sunsets. That’s not the case for surfer photographer Chris Burkard’s latest venture. In an attempt to capture a perfect surf photo, Burkard captured images of professional surfers Brett Barley, Chadd Konig and Patrick Millin in the harsh, subzero temperatures of Norway.

Recently, Burkard teamed up with SmugMug Films, a YouTube series created by the favored photo storage site, SmugMug. Burkard—who is a self-proclaimed “cold water fanatic”—was drawn to the arctic landscapes. In his attempt to photograph places that, “feel and look more wild” Burkard typically chooses his locations, “that people naturally associate with adventure.”

“It just feels foreign, it’s like walking on the moon or something,” Burkard said in the video. He also described his exploration as a “photographic purgatory.”

The surfers, along with Burkard, wore five to seven millimeters of gear to brave the icy waters, which can range from thirty-five to forty degrees. Those were the moments where Burkard felt the “most alive.”

“My goal has always been to create images that inspire people to get off their couches and go explore something new,” Burkard said, who is a senior staff photographer at Surfer Magazine and a global imaging ambassador for SONY. “The idea of exploration is the thing that really makes me want to push harder. It’s the driving force behind a lot of my work.”

However, there are risks when traveling in harsh environments. Burkard has lost $30,000 worth of gear during his travels.

Some of the equipment that was used in the short film included the Sony A99 DSLR, Sony A77, a Nikon AW-1, Induro tripod, along with a superfluity of protective gear. He also used a DJI Phantom Drone—an aeronautical filming device—to capture most of the overhead shots.

“I want to make sure that when I’m shooting photos that I’m able to relax, knowing that safety is taken care of,” Burkard said in an interview with SmugMug.

Before venturing to a new location, Burkard likes to have an “unskewed” perspective of where he is going. “I also want to make sure that I’m being educated on where I’m going, because the more unique the less you know,” Burkard said. “That’s a really important mantra to have at all times.”