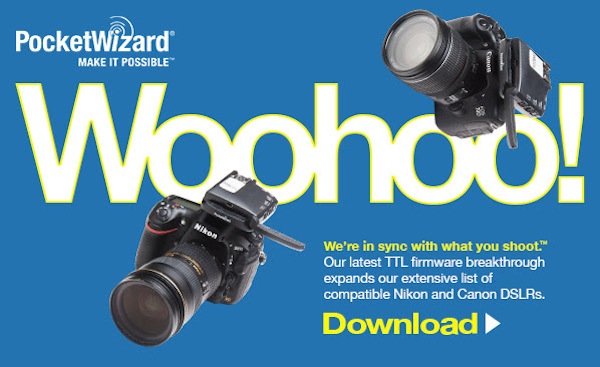 Pocket Wizard, a brand that has been innovating photography technology since the late 90’s, has just made a huge announcement. PocketWizard will release a new update to its ControlTL (Control the Light) firmware for its Canon and Nikon versions of the MiniTT1 and FlexTT5 radios.

The two devices that were introduced in 2009 have aided professional and amateur photographers with its “slide-n-shoot simplicity.” At its most basic form, this device allows the picture taker to remove the flash and set it off remotely as if it is still attached to the top of the camera.

Furthermore, Pocket Wizard has announced that this update will incorporate newer versions of Nikon and Canon’s DSLR cameras. The new firmware version 3.700 for Nikon will incorporate the D810, D610, D4S, as well as most of the newer Nikon cameras. The firmware update 6.700 for Canon cameras will also incorporate the 1D X, 6D, T4i, 70D and other recently released models. For a full comprehensive list of compatible cameras, visit the Nikon and Canon Pocket Wizard webpage.

Best of all, if you’re a previous owner of the ControlTL system, you don’t have to purchase anything. All you need to do is get the free update through Pocket Wizard Utility and install it through a USB device. However, the update will not work unless you have the Pocket Wizard Utility version 1.54 or later.

This update is extremely exciting for those who like to buy newer camera models and still want to use the ControlTL system. For instance, the Nikon D810 was only released in June 2014, which shows that LPA Design acted quickly and efficiently to release this latest update to their firmware.

Heather Ambrose, the Marketing Director at LPA Design—and manufacturer of Pocket Wizard’s products—further commented on what this latest update means:

“Not only are we now compatible with all current Canon and Nikon DSLRs, we’ve added resources to our firmware department allowing us to have a significant breakthrough in firmware development. We can react much more quickly to newer cameras entering the market.”

If you would like to buy either the MiniTT1 or FlexTT5 radios to use the ControlTL function, you can use Pocket Wizard’s directory for online distributors and store locators. As for the simple download, just follow this link to get the latest firmware update.