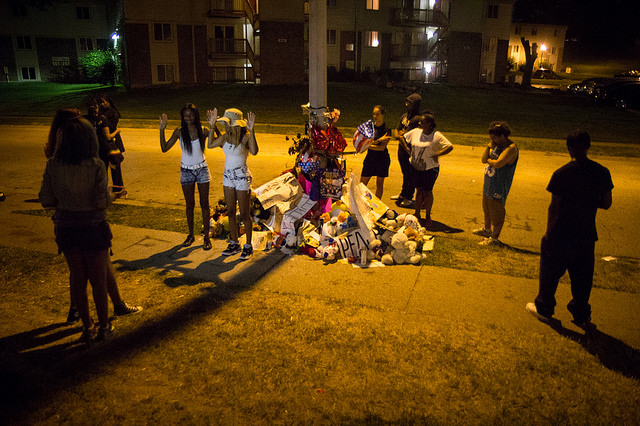 There have been countless heated protests nationwide and globally after the deadly shooting of 18-year-old Michael Brown in Ferguson, MO by police officer Darren Wilson on August 9th. As a result of these horrific events, officers around that area are now expected to wear surveillance cameras on their uniform to more efficiently serve the public.

?Both witnesses and officers have several different accounts as to what actually occurred immediately prior to the fatal shooting of the black teen by the white officer. Many people are confident that the new “cop cams” will help to dictate the truth in touchy matters like this one. Many say that if the officers had cameras on them, it would be much clearer to see where the fault lies. Others say that the incident probably never would have happened at all, clandestinely pinpointing the blame on the officer and his quick, but incautious actions.

?The American Civil Liberties Union has expressed their confidence towards these actions, but their opinions are a bit more complex than that. They, like most people who have heard about this new affair, are anxious to see how things turn up. This means that there is still debate over certain aspects of the ordeal: Will the police be able to turn the cameras on and off when they please? Will the cameras disturb what many people still trust as confidentiality when offering tips and other useful information between officer and civilian or investigative interviews? When police officers enter peoples’ homes, will the privacy of the home be tampered with? There is a fine line between surveillance of the police officers and surveillance of the public.

After realizing the unconstitutional actions of the stop-and-frisk laws, the camera implementers are hopeful to keep the boundaries with privacy wherever they belong. The cameras being used were donated to the police departments by Safety Visions and Digital Alley, two video surveillance companies.

“Oftentimes, however, officers must exit their vehicles in order to pursue and/or investigate an incident, and in-car video systems are relatively ineffective if such activity occurs outside the field of view of vehicle-mounted cameras”, reads a statement from the Digital Alley website. “This has resulted in an emerging and rapidly growing market for officer-worn body cameras that can document events occurring within, in near proximity to, and up to several hundred feet away from the officers’ vehicles.”

There have been some local businesses that were looted during nightly protests in Ferguson, and the police have responded with military and riot gear to calm turmoil. A civil investigation of the police department of Ferguson, MO has been opened by the US Justice Department.