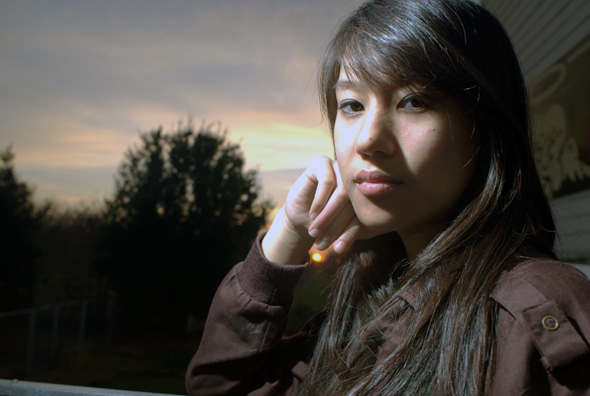 To friends and colleagues, Jessica Lum will always be remembered as having an unbreakable spirit with a committed passion for photography and multimedia journalism. Many described her as the future of the business and the next big thing. It was with great sadness that Lum lost her battle to metastatic pheochromocytoma, a rare cancer, in January 2013. Before passing, however, she undoubtedly left behind her imprint on the industry she loved so dearly.

“I’m sure many saw her passion and dedication to photojournalism, yet unaware that hers was a drive fueled more intensely by the awareness of her mortality. Though the photo of the clock in her hospital room captioned “time” was her sentiment to the world of how little of it she had, it was also a message to me explaining more poignantly her sense of urgency diving headlong to produce her work in spite of cancer,” Jessica Lum’s mother, Anna, said.

For those unfamiliar with the life and work of Lum, she was a force of nature. Born in Sacramento, she attended UCLA in 2005 and was diagnosed with cancer during her senior year. To those who knew her, it was unsurprising that she didn’t let cancer stop her dreams and ambitions.

“Jessica knew early on she would be a photojournalist, and she never let that dream die, even when she knew she might in the near future,” Salgu Wissmath, a friend, said.

Lum went on to attend UC Berkeley’s Graduate School of Journalism. It was there that Lum completed her award winning master’s thesis. She documented the lives of Slab City in California’s Colorado Dessert, an area in which residents give up the city and suburbs for a life in the dessert. She won the Best Student Feature Award for the 2012 Online News Association Award for her work.

Lum also shared her talents with various media publications including Hypen, Mission Local, Los Angeles Times and PetaPixel. Each place she worked with spoke to the integrity of her work as well as her charismatic personality.

“She was wonderful. I still think about her. Often when I have a design problem, as she was terrific at design. They say people are forgotten, but she still holds a very dear place in my memory,” Lydia a former colleague from Mission Local said.

All these remarkable feats and works of arts Lum had the drive to start and to complete with such mastery is what led to her selection as a Jury member for EyeTime 2012, an annual photography competition for students and photographers from The Morpholio Project. “When I write and when I take pictures, I realize that it isn’t me trying to create something, it’s me trying to preserve the moment. But in preserving the moment, I’m not trying to battle against the inevitability of time passing. I’m simply trying to understand the moment,”(quoted from EyeTime).

According to Jeff Kenoff,  co-creator of Morpholio, it was her “last professional exercise,” and she was selected because “she was the perfect person – the second you met her you just knew she was going to be big.”

Speaking with nostalgia in his mind and kindness from his heart, he added how she was unknowingly to all acting as Juror from her hospital bed. Despite what most would consider a setback, Lum did her job, and did it well. “She gave it a voice. She was one of the people who helped launched this competition. She searched to capture a moment and was dedicated to sharing it with the world. It was humble, brilliant work. She was too young to understand how powerful her work was,” Kenoff said.

This year, EyeTime 2014 will honor her memory through the Jessica Lum Award for emerging photographers that exhibit hard work and excellence in their field, just as she did.

“If others can be inspired by her story and her work, then that’s the point of this award. For me, whoever wins, I hope they enjoy the significant honor that’s named after her,” Kenoff said.

Lum’s mother also wishes for the same. “I hope her work, however short-lived, continues to be an inspiration to generations of photojournalists. More so, I hope that her short journey serves as a reminder of the brevity and uncertainty of life, and would inspire many to redeem the time on earth.”

For Wissmath, she has already been inspired. “I know I’m not the only one she inspired. Since her journey with a camera started in Sacramento City College Darkroom that summer after high school, she met countless people who have also spoken of how she has touched their lives or impressed upon them to live their own lives to the fullest.

In Lum’s own words she beautifully and simply summarized a universal truth about what it means to exist in the world. “This is not the only life to be lived….In any case, see you on the other side.”

The winner of the EyeTime 2014 Jessica Lum Award will be announced December 4th, 2014.