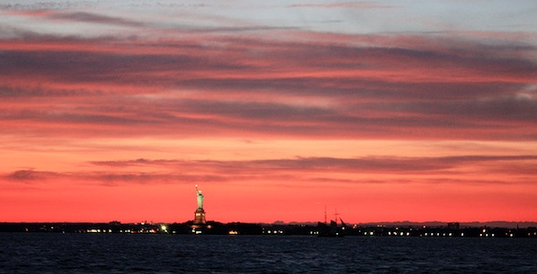 Everyone loves watching a sunset. In the final moments of the day, where light meets dark, beautifully immersed colors paint the sky for a perfect romantic setting and, more importantly, a great photo op. Here are the 10 best spots to photograph the sunset in New York.

For just a few more days, Wolffer Estate will be hosting “Twilight Thursdays” and “Sunset Friday and Saturdays.” Enjoy some live music, wine and cheese tastings, and, of course, the sunset over their vineyard.

Take a trip to Bay Ridge to view this iconic bridge that was completed in 1964. It was the last public project completed by Robert Moses, the New York State Parks Commissioner and head of the Triborough Bridge and Tunnel Authority. There isn’t a pedestrian walkway so head to Shore Road Park to get good views of the bridge.

Already a must see tourist attraction in the U.S., the sunset only adds to its beauty. Comprised of three waterfalls (some of which are technically in Canada) ranging in size, you have your pick of which to photograph.

It might not be summer anymore but you can still enjoy the beach and the post-Sandy boardwalk for some photographs. Long Beach hosts an array of events that take place on either the boardwalk or beach, but around this time of the year you’ll find your photo shoot to be quiet and serene.

In 1900, George Boldt set out to have a castle built for his wife so that they could have a summer house. Unfortunately, she died in 1904 and all work to castle ceased. Left untouched until the 1970s, Boldt Castle was finally restored and is now open to the public.

You’ve probably visited the Empire State Building at some point in your life but it wouldn’t be a bad idea to revisit, especially if you didn’t go during the sunset. One hundred and two floors into the sky, you’ve got a spectacular view on the city that never sleeps.

If you’re into folklores than the town of Sleepy Hollow is for you. Immortalized by Washington Irving’s tale, it’s an actual town with a lot of scenic value. Visit the Old Dutch Church or the Sleepy Hollow Cemetery (where Irving is buried) at sunset for some eerie photos.

Sprawling over 6.1 million acres through multiple counties, you won’t have difficulty finding a perfect photo session in the Adirondack Mountains. Lake Placid and Saranac River are two popular options.

Originally, Old Westbury Estate belonged to steel heir John Shaffer Phipps in 1906. Since 1959, it is now open to public tours making it a great place to shoot. An upcoming event that would serve as a perfect photo op would be the 5,000 hand carved pumpkins in the annual RISE of the Jack O’ Lanterns.

Once an active shipping location, Valentino Pier is a go-to place for multiple attractions. Statue of Liberty, Governor’s Island, Manhattan’s skyline, Staten Island and the New York Harbor can all be seen from this pier.