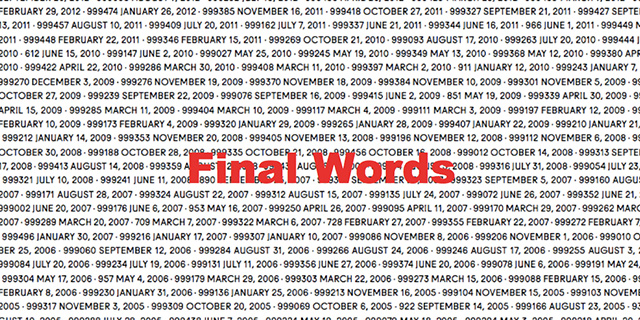 Photographers Selfie Against The Death Penalty Could Change The World

Expected for release in Fall 2015, Mark Asnin and Joshua Herman’s Final Words compile the last words to be uttered by convicted death row inmates in the state of Texas. Since 1982, Texas has exacted capital punishment on 517 inmates and that number will only continue to rise. Asnin and Herman are giving new life to these words through this collected narrative in hopes to help abolish this murderous paradox our society practices. However you chose to refer to these condemned individuals–criminals, prisoners, inmates, a number, a person that is less than worthy–Final Words asks that you look for the humanity in each of them and to also question if our society’s definition of justice is just at all.

Asnin, being a renowned documentary photographer, invites photographers and anyone really to join the campaign Photographers Selfie Against The Death Penalty. This campaign sparks curiosity and funding but, more importantly, opens a conversation about human rights through the power of art.

Resource Magazine spoke to Asnin about Final Words and the Selfie Campaign while he was promoting his work in Paris.

Why did you initially decide to publish Final Words? Was it something that had been on your mind for some time, or was there an exact moment of inspiration?

Being in documentary photography, we’re always looking at social justice issues. For me, the death penalty had always been something that I was interested in even when I was younger. In ‘91, I was working a lot with Stern magazine, a German weekly, and I had proposed a story to a journalist about the most absurd and extreme death penalty cases. You know, cases that even make people for the death penalty raise eyebrows. One of these cases was taking place in Louisiana of a man convicted of multiple murders. When this man was arraigned in court, it was clear he was mentally ill. He was convicted for his crimes but under the Supreme Court couldn’t legally be executed because of his mental issues. Well, the state of Louisiana decided to treat him with medicine in order to make him competent enough to be executed. They figured, “we have the medicine, we know it works, let’s give it to him and then we’ll kill him.”

One day during this trial, one of the prosecutors from this case told the German journalist and me, “They’re not humans. They’re animals. Never forget that.” The journalist replied with, “Oh yes, like Hitler.” The prosecutor asked if he was comparing him to Hitler. He said, “No, of course not. There’s only one Hitler, but you two share the same mentality.”

Being a citizen of the world and a Jewish American and knowing what that mentality did to six million people, I thought about the prosecutor’s dehumanization of this inmate and the journalist’s comparison to Hitler, and I never did forget that moment. It was a poignant, life changing experience.

When exactly did you begin to work on this book?

Last August it came to my attention that the final words of the death row inmates in Texas were open to the public. It had been twenty or so years after that initial incident, and I thought that this would be the best way to confront that dehumanization I witnessed with the Louisiana case. No matter how horrific their crimes, there are always multiple layers. Some are innocent, some are guilty but I thought that these final words were a way to say that no matter the crime, these are still human beings. Let’s read these words and see what we can take away from them, what we can learn about them. If you read these words, humanity is revealed to show that these individuals aren’t animals. And you know, we’re not looking to honor these crimes. People ask about the victim’s words. Well we can’t get them, unfortunately. But I think if you read these words, they’ll tell a story of how punitive our country is. It’ll cause you to ask yourself as part of this society, as part of America, “Why are we doing this?”

For Final Words, the goal is to start a conversation and a dialogue for the new generation. It’s not going to change everyone’s mind but it tries to with one person and one mind at a time. The reason it’s taken so long is that we needed a successful crowd funding. We have help from all over the world from abolitionists, human and civil rights group and to youth groups that all help us raise awareness to get people interested.

Currently, Final Words contains the narrative of 517 death row inmates. Yet, a collective voice is created to unite the overall purpose of the book. Can you speak more to this?

Ultimately, we’re hoping it creates a conversation about the death penalty from the death row inmate’s words themselves. We are not writers. It’s their words that humanize this situation and combat the other side to this argument that their viewed as animals. I think the book will be successful in helping abolish the death penalty. As long you start a conversation that’s all that’s important.

There’s nothing in a free society that you should not be able to read. If you read the book and are still for the death penalty, then that’s your choice. But I hope most view these people as humans and change their mind. I wan them to understand that no matter how horrific the crime, why should the state do the same thing?

Can you explain the idea behind “Photographers Selfies Against Death Row” and its objective in serving the overall project?

The Selfie Campaign came from me being a photographer. A lot of people in the photo world were telling us it wasn’t photo driven enough. So, we asked photographers to give us their opinion. We needed to gain attention and tell the world–the photo world–what we were doing. Specifically, we wanted to know what photographers as a group thought about this project and the death penalty. Once that gets published, we hope to highlight how these photographers really helped to contribute to this project.

The death sentence is a hotly debated issue in America. Was there ever a time in your life in which you weren’t against it? Or can you at least understand the other side to this argument?

I grew up in a liberal Jewish home. I’m not a pacifist but the death penalty does not reflect my values, especially as a Jewish American. Understanding my history from just seventy years ago of what happened to my people, I’m led to believe in social justice. I was taught to respect and be aware of any group of people that are oppressed. And I’m not comparing the death penalty to the holocaust but I just wasn’t bought up for an eye for an eye.

The families that go through this, I’m not judging them. No one should be in that situation, so I have all the empathy for the victim’s family. When I talk about the death penalty being corrupt or how I’m against it, it’s not towards the families. I think they’re manipulated by the system, by the government scaring them and making them think that the death penalty is a deterrent. I don’t believe in those making the laws because they don’t have the best interest of these victims in their heart. They’re using them to win votes by convincing them that the prisoners are animals. They create hate. I think the families are bullied and exploited by the system. I don’t believe that the death penalty is the best our country can do.

To this day, capital punishment is legal in thirty-two states. Why do you think this number is so high? Do you think more states will outlaw in the near future?

There are movements in America against the death penalty. There are libertarians against it. You also have conservative republicans against the death penalty because it’s so expensive; it’s not economically feasible. You have more and more cases based on science, while some states don’t use capital punishment at all. Texas is by far the most out of control. If you look at California, they have the highest number of people on death row but they have the lowest rate of execution. Why is Texas out of step with the rest of the country? They are definitely out of step.

Based on research, it says the death penalty will be gone in fifteen, twenty years. That’s just based on research, and I don’t know if it’ll be abolished for solely moral reasons. I’m sure politics and economical factors will be part of it. But, no matter how it ends, our country will be better for it. If my book can help end it and be a piece of the puzzle, I think that would be a great positive. It’s one step at a time.