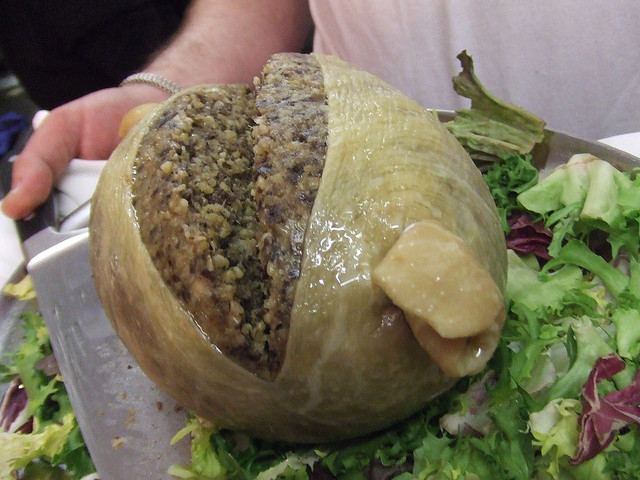 Anything goes in the world of food.  Creative and tasty dishes are made every day and with food photography, we don’t have to worry about ruining the ones that are too pretty to eat. But what are the limits when it comes to taking snapshots of our favorite foods? Naturally, we would think that the dishes and foods we don’t like are the ones we wouldn’t photograph. And then there are some that just aren’t photogenic or worse, tastes bad AND looks bad.  So here’s a list of ten foods you don’t want to photograph and certainly don’t want to eat. Though if you’re feeling curious enough to try them, consider this a cautionary tale.

10 Things You Might Not Want To Eat Or Photograph

A natural give in.  Not only is it the smelliest fruit in the world, but this southeast Asian produce is awfully spiky!  Drab in color and casting awkward shadows, you definitely don’t want this in a fruit bowl.

Yum organs!  Gristly and tough in texture, this is probably the least likely part of the animal we would want to dig into. Unless you’re taking photos to appeal to the medical community, the liver is another that would be a distasteful portrait

To its credit, oatmeal is a nutritious way to start the day but a dull one at most if you’re eating completely plain.  Not only that, the lumpy beige color of the meal is overpowering; even the brightest of cereal bowls seems dulled down.  Though you could find a way to jazz up this breakfast such as with dried fruit, that’s the silver lining here.

This root vegetable would have been better off staying in the ground. Surprisingly tough, the turnip comes in many shapes that are ultimately unflattering for photographs.

Arby’s is the worst of all the fast food chains.  Cold and plastic looking and emits and odor that even Subway would hold their breath.  Besides, if you wanted to take a picture of a deli sandwich, it would be a better idea to go to a real deli in the first place!

More organs!  And a classic Scottish dish too.  It is essentially a sheep’s stomach stuffed with a meat pudding mixture of the animal’s heart, lungs and liver seasoned with onions, salt and other spices.  If that didn’t have your skin crawling, maybe the next entry will.

An Icelandic dish of shark or sleeper shark that has been cured in a unique fermentation process which is then hung to dry for about five months.  Consumers have said that the meat gives off a strong Ammonia smell and a very fishy taste.  While a sight to behold, it would be a putrid portrait

The cake that everyone loves to hate.  It definitely isn’t the prettiest cake in the bakery either.  It’s chewy and dark brown and has too many negative connotations that are so firmly rooted in the baked good.  There’s no bouncing back from all of that bad publicity.

The word translates from German to “sour cabbage.” Swimming in lactic acid bacteria, it is only meant to be paired with meat; there are so few things that you can actually do with sauerkraut.  Also, the light coloring of regular sauerkraut makes the dish look too uniform through a lens.

This is the stuff your mother was talking about when she said that the box would be healthier than the cereal you had for breakfast.  Drier than a rice cake, low calorie bread is a dietary item that shouldn’t be allowed for consumption.  It is also uninteresting in shape and some brands break like Styrofoam; little crumbs everywhere.

Want to see some more appetizing food photography? Take a look at the latest Resource Magazine, its the Cooking issue! Available on iTunes Resource App store or our online shop www.resourcemagshop.com.